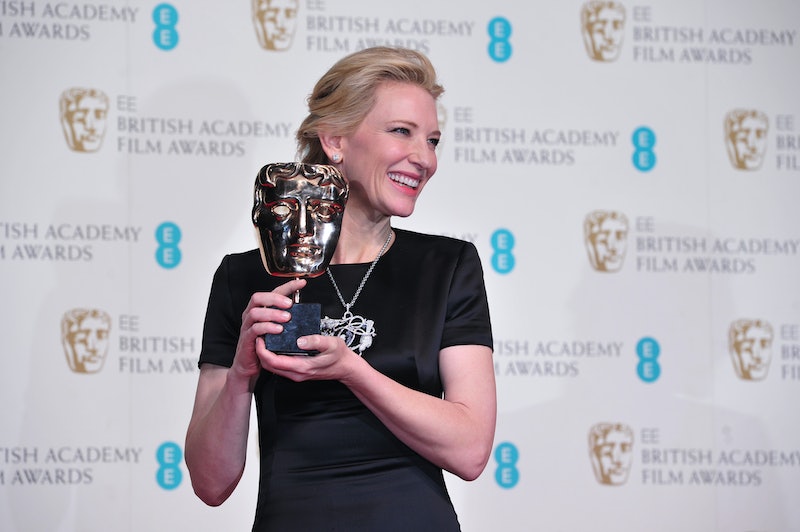 In the whirlwind of red carpets, sparkly gowns, and speeches that run way too long, the 2015 award season is in full force. Although the Golden Globes and the SAG awards are behind us, there's still a lot to look forward to, and this Sunday night, the British Association of Film and Television Arts is awarding its honorees in London. And as much as I hate to say it, some of these award shows are better than others, and the BAFTA awards surely reign supreme. There are few things I love more about award season, but unfortunately, there are also few things that put me to sleep faster than the Oscars every year. The BAFTAs? Totally don't have that problem. In fact, I'd even go so far as to say the BAFTAs are better than the Oscars. I realize that to some, these are fighting words, but I swear I have good reasons.

And honestly, is it any wonder when the British do just about everything better? I spent most of my childhood wishing I was a Spice Girl, and for good reason. Not only are their accents way cooler than ours, but in this case, their big award show is, too.

The Surge Of British-ness

Let's face it: In a world practically ruled by One Direction (not that I'm complaining...), British culture has a far bigger impact on America now than perhaps ever before. So many of our hugely successful TV shows started out as British shows first, like The Office. Everyone here loves shows like Downton Abbey andDoctor Who, and why? Because British culture is the best. Fix yourself some tea, because the Brits are here to stay. Especially Harry Styles, if I have anything to say about it.

It Breaks Up The Monotony

A month into award season and I'm starting to get a little bored. It's the same — the same people in similar dresses in similar venues around Hollywood being asked the same questions and being nominated for the same category. The BAFTAs are on an entirely different continent, and although certainly many American A-listers make an appearance, there are a good bit of British actors in attendance, too. It's a nice change of scenery before we settle in for the yawn-inducing Oscars, don't you think?

There Are Unique Categories

My favorite thing about the BAFTAs is that it honors British actors and projects in categories of their own, giving those who have contributed incredible work to the entertainment world the chance to be honored for their efforts. And it's kind of awesome.

The BAFTAs Help Predict The Oscars

More often than not, those who win BAFTAs go on to win Oscars, and if the BAFTAs did it first? I'm just saying they may influence our thinking more than we might realize on a daily basis. They also tend to award movies that the Oscars might turn their nose up at, even if they're projects that actually do deserve recognition.