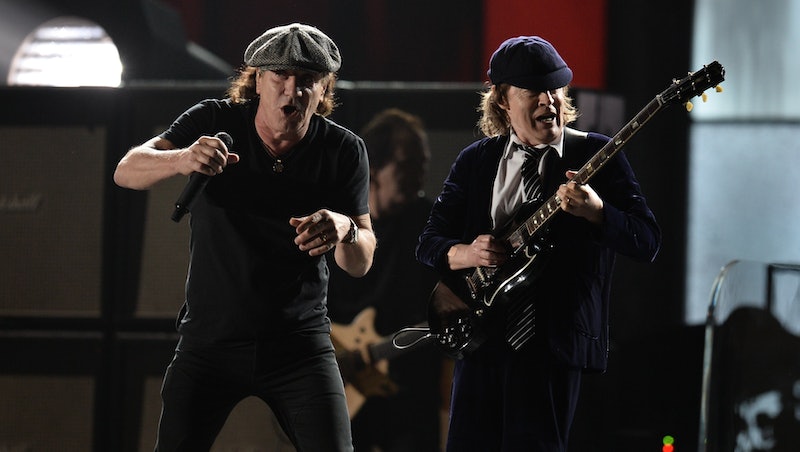 Lady Gaga and Tony Bennett have been making the whole pop star plus older man crooner thing happen for sometime now, so them performing at the 2015 Grammy Awards is no surprise. But them plus AC/DC opening up the show and Jessie J and Tom Jones singing together begs the question — what is up with these old performers at the Grammys? Ariana Grande has got to be confused about who all of these people are. CBS may be the "most watched network," but we know that's thanks in large part to targeting an older demographic. So are they trying to keep the Grammys baby boomer-friendly?

Yes, 60 Minutes preceded the Grammy Award, but did we need to start the night out with AC/DC performing two songs? (Although I'd like to acknowledge that lead singer Brian Johnson has still got it.) And Jessie J and Tom Jones (in a sparkly suit coat — meow, what is new pussycat?) honored songwriters Barry Mann and Cynthia Weil by singing "You've Lost That Lovin' Feelin'" quite early in the show. Yeah, that's a great song, but their rendition was traditional — and kind of stale. Where is Tom Cruise's Maverick when you need him?

Barry Gibb appeared on the Grammys stage as a presenter, but the Bee Gees won the Lifetime Achievement Award so that makes sense (you know, you kind of need a lifetime of music to win that award). And yes, Paul McCartney is at the Grammys and will be performing. But he makes a point of never staying too long out of the limelight, so that's no surprise. Although I'm sure youngsters will be confused again about who is the old dude performing with Rihanna and Kanye West.

I mean, Madonna even qualifies to be a member of AARP at the age of 56. But at least "Living for Love" doesn't sound old (even if it doesn't sound particularly good). And although I am obsessed with ELO (and literally jumped up and down when Ed Sheeran introduced them) I was surprised Jeff Lynne was on the performers list. (And I was dying — dying — when the cameras focused on McCartney rocking out to "Evil Woman.")

But hey, if featuring some old men (since the majority of the older musicians are male — ahem) helps introduce younger viewers to some classic artists — I'll take it. But the Grammys just need to work on making these new and old mixes make more sense and have a better balance so that we know we are watching the 2015 Grammys and not the Rock and Roll Hall of Fame Induction.