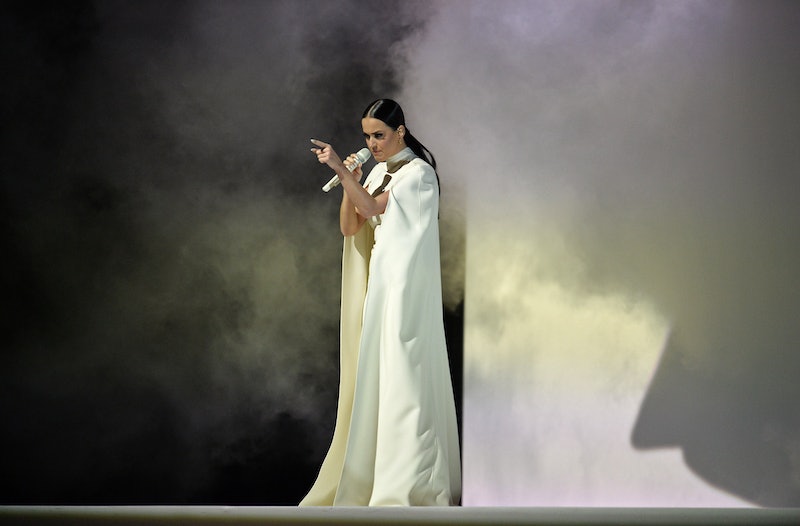 One of the most memorable moments of the 2015 Grammy Awards was also, happily, one of its most feminist: following a heartfelt introduction by President Obama, domestic abuse survivor Brooke Axtell took the stage to speak about her experience and advocate for change. "Authentic love does not devalue another human being," she said. "Authentic love does not silence, shame, or abuse." Afterwards, Katy Perry performed "By The Grace of God," a song about taking control of one's own life and finding independence. It was an emotional, profound performance, one that promoted female empowerment and highlighted one of the most pressing, feminist issues today.

There's no denying the importance of this moment, nor should there be. It's wonderful that the Grammys gave substantial time to such a major issue, and hearing Axtell's moving words undoubtedly inspired many other survivors to speak out about their own experiences with abuse. Yet it's hard to applaud the Grammys for their feminism when the same show that gave Axtell a microphone also gave one to some of the very men she spoke out about. Sitting in the audience, celebrating their nominations, were convicted abuser Chris Brown and alleged rapist R. Kelly, plus however many other violent men that have just been lucky enough to not have their crimes reported in the press.

Continuing to honor these men while promoting feminist issues is a saddening display of hypocrisy from the Grammys, but unfortunately, it's not a surprise. The awards show has a history of tolerating domestic abuse, from allowing Brown to perform onstage in 2012 — on the third anniversary of his assault, no less — to giving nomination after nomination to suspected or known abusers, from Ike Turker to Ozzy Osbourne. Misogynistic artists like Eminem have collected dozens of awards for their music; in 1992, James Brown, alleged to be abusing his then-wife, was given a Lifetime Achievement Award.

So while the Grammys' hypocrisy tonight was certainly disappointing, it's in line with the awards' past behavior. For every groundbreaking woman the show honors or feminist message it sends, there's a known rapist, abuser, or misogynist accepting yet another award and being showered with praise. This year included perhaps the biggest show of feminism the Grammys have ever had, with the President himself demanding change and speaking out for women's rights. If there was ever a time for the awards to cease their hypocrisy, it was tonight. Instead, they interviewed Chris Brown and congratulated R. Kelly on a successful career.

The Grammys are not alone in this, of course, nor is it unique to the music industry. Woody Allen is still beloved by many and making millions from his movies; comedy clubs across the country are welcoming Bill Cosby with open arms. Yet rarely is the hypocrisy as obvious as it was tonight, with abusers receiving as much attention and acclaim, if not more, than the victims of abuse sitting in the same room.

There is so much the Grammys could do better, and I'd like to think it's willing to make the effort. I know I'm not alone in my complaints; when Axtell spoke, I saw dozens of tweets, just on my feed alone, calling out the awards for their inclusion of Brown and other abusers. Feminism has become a national conversation, and it's clear that many people, if not the Grammys, have no tolerance for misogyny in Hollywood. Yet until that change is made, until the show decides to fix its mixed message and embrace feminism entirely, watching the awards will be difficult. I love the Grammys, but I'm uncomfortable enjoying an awards show that so willingly celebrates abusers.

"Artists have a unique power to change minds and attitudes, and get us thinking and talking about what matters," President Obama said during his introduction, and he's completely right. The Grammys and its performers have the ability to inspire real change, to promote messages that are important and necessary. And in some ways, it's doing just that, by giving Beyonce her 20th award to showcasing a 56-year-old's performance to allowing the President himself to speak about feminism. But it's not enough, not until the Grammys decide to forgo the hypocrisy that's colored its shows for years.

Said Obama, "It's on us, all of us, to create a culture where violence isn't tolerated, where survivors are supported, and where all our young people, men and women, can go as far as our talents and their dreams can take them." If only that was the only message the Grammys was willing to send.

More like this
Sandra Bullock, Girlboss Extraordinaire
By Matt Harkins & Viviana Olen
Joe Alwyn Reacts To Taylor Swift Earning An NYU Doctorate In A Rare Interview
By Jake Viswanath and Nicole Pomarico
How To Fight For Reproductive Rights, Based On How Much Time You Have
By Courtney Young
The 'Hocus Pocus' Sequel Finally Has A Release Date & It Makes Total Sense
By Shannon Barbour and Radhika Menon
Get Even More From Bustle — Sign Up For The Newsletter