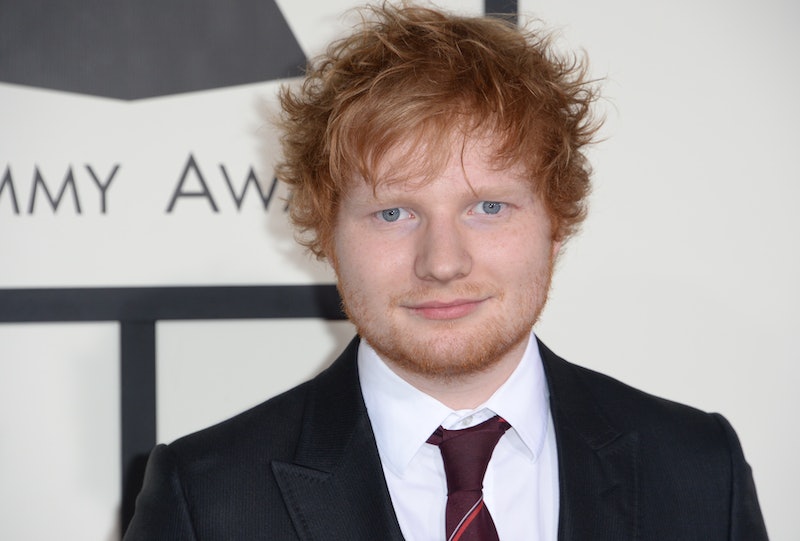 There were no dancing minotaurs or smoke machines needed: Grammy nominee Ed Sheeran simply gave a beautiful, stripped down performance of his hit "Thinking Out Loud" — and, surprisingly, with a little help from friends including the likes of very special guests John Mayer, Questlove, and Herbie Hancock. Introduced with "immense pride" by fellow Brit James Corden, Sheeran sounded absolutely perfect during Sunday night's broadcast of the 2015 Grammys — and it, of course, helped that he was accompanied by such renowned and respected artists like Questlove, Herbie Hancock, and John Mayer (who, it should be noted, rocked a hot pink guitar).

Sheeran — or as he's known stateside, Taylor Swift's BFF (wonder what she thought of him performing with her ex John Mayer?) — received a standing ovation from the Grammy audience. (With the exception of, seemingly, Kim Kardashian, who apparently doesn't feel hot pink guitars are standing ovation worthy.)

But, even after putting on his own impressive set, Sheeran wasn't finished. The swoon-worthy ginger sensation introduced legendary rock band Electric Light Orchestra for their set after finishing his performance and even joined the band for their performance of their classic tune "Mister Blue Sky."

It's safe to say that Sheeran got his Grammys night off to a good start, but things could get better for the 23-year-old crooner, who is up for three awards tonight, including Best Pop Vocal Album and Album of the Year for his hit record X.