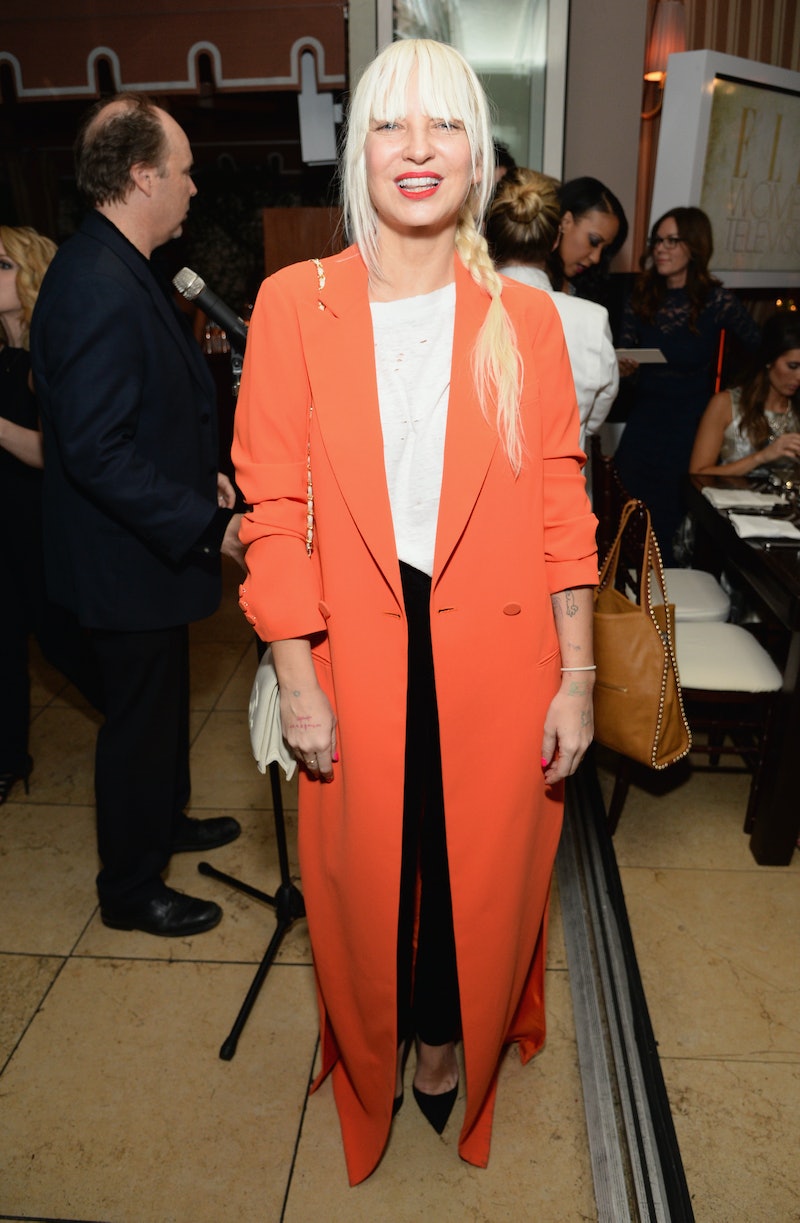 When you think of Sia, you probably imagine the back of a platinum blond bob wig and Dance Mom 's Maddie Ziegler, but there's more to the Australian singer than that. While I fully appreciate Kristen Wiig dancing it out to "Chandelier," it's interesting that we never actually see Sia perform. So, why doesn't Sia show her face? She explained everything in an "anti-fame manifesto" for Billboard in 2013, likening the critics on the internet to awful mother-in-laws who constantly tell you you're ugly or not good enough. She also spoke to Dateline's Chris Connelly about why she doesn't want to be in the spotlight herself. "I don’t want to be famous, or recognizable. I don’t want to be critiqued about the way that I look on the Internet … I’ve been writing pop songs for pop stars for a couple years and see what their lives are like and that’s just not something I want."

But now that you know why Sia hides her face, you probably want to know what she really looks like. She doesn't hide herself in public like how Shia LaBeouf walked around with a paper bag on his head. She smiles for the cameras at parties, goes out on some red carpets with her husband, and doesn't wear her wig out and about in LA. In fact, before she achieved mega-stardom, she used to perform and give interviews all the time while showing her face. I've rounded up six times she faced the cameras below to give you a better idea of what she's really like, because she doesn't actually need that wig to be an amazing artist.

She has giggly fun with the crowd and delivers a killer performance. Her hair is really short here — it's not a wig.

Posing With Her Husband At The Annie Premiere

The love letter that Shia LaBeouf read onstage at the Grammys was reportedly from her real-life husband, Erik Anders Lang. How cute is that?

Talking About Her Adorable Dogs in 2010

Ironically, this interview was with an outlet called Face Culture, and Sia talked about having her dogs on tour so she doesn't feel lonely.

Her signature blond bob is here, but she showed her face for this performance at "An Evening With Women" at the LA Gay & Lesbian Center.

Advising With Christina Aguilera On The Voice

During The Voice Season 1, Sia was a trusted adviser, giving great advice to contestants.

Hanging Out At The 2015 Grammys

Even though she disguised herself with giant hair on the red carpet with Ziegler, she looked totally normal inside the ceremony itself for this fun snap with Pharrell Williams.