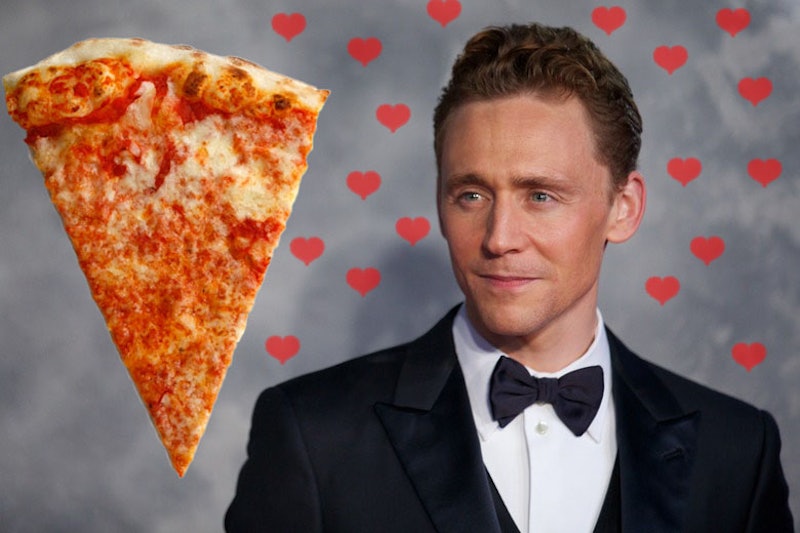 Many of you know Tom Hiddleston as the hot actor behind Marvel badass Loki. Many of you know pizza as the hot dish that fills both your stomach and the empty void in your life. What you probably don't know is that Hiddleston happens to share his birthday with the most important holiday of the year, National Pizza Day, and that they've been carrying on the most heated love affair of the decade. And I have proof.

I know this will probably come as a shock to you hardcore Jennifer Lawrence and Pizza shippers, and I hate to be the bearer of bad news. The truth is, Pizza got sick of playing second fiddle to french fries, candy bracelets, and to a lesser extent, Chris Martin. And who was there to sweep Pizza up in it's most fragile moments? The ever-romantic Hiddleston, his eyes aflame with love and unsatiable hunger.

Since then Hiddleston and Pizza have been my OTP, and for good reason. There's just something about those two that radiates beauty and passion. They're up there in the iconic levels of Hollywood coupledom, along with Elizabeth Taylor and Richard Burton, Jay-Z and Beyonce, and even Brangelina. It's a love that feels truly undying, and it's my hope that those crazy kids truly make it.

In any case, if any of you are skeptic, here are my exclusive photos of all the times Hiddleston loved pizza.

While Doing Press For The Casual Summer Blockbuster

A part time gig as Loki, God of Mischief, Lies, and General Green-Plated Evil is great and everything, but it's Pizza that's a true gift from the gods.

While He Was Supposed to Be Signing Autographs

I mean, he gets he has responsibilities as a big time movie star, but sometimes you just have to prioritize.

While He Was Casually Winning Awards for His Acting Prowess

I mean, accolades are whatever compared to the hot and saucy allure of Pizza.

Who can forget after that great scandal when photos of Hiddleston and a box of sauceless bread surfaced in OK! Magazine and he took Pizza out on the red carpet to prove they were an untouchable force. I mean, Cheesy Bread is merely an appetizer, but Pizza? Pizza's forever.

Each and Every Time He Was Drunk, Probably

It's when we love Pizza (or crunch wrap supremes, whatever's open at 3 am to be honest) the most. It's especially adorable in this photo at the MTV Movie Awards. Oh, you! That's now how you pizza!

During Greatest Triumphs and His Darkest Hours

It was pizza that supported him through richer or poorer, in sickness and in health, till death do they part.