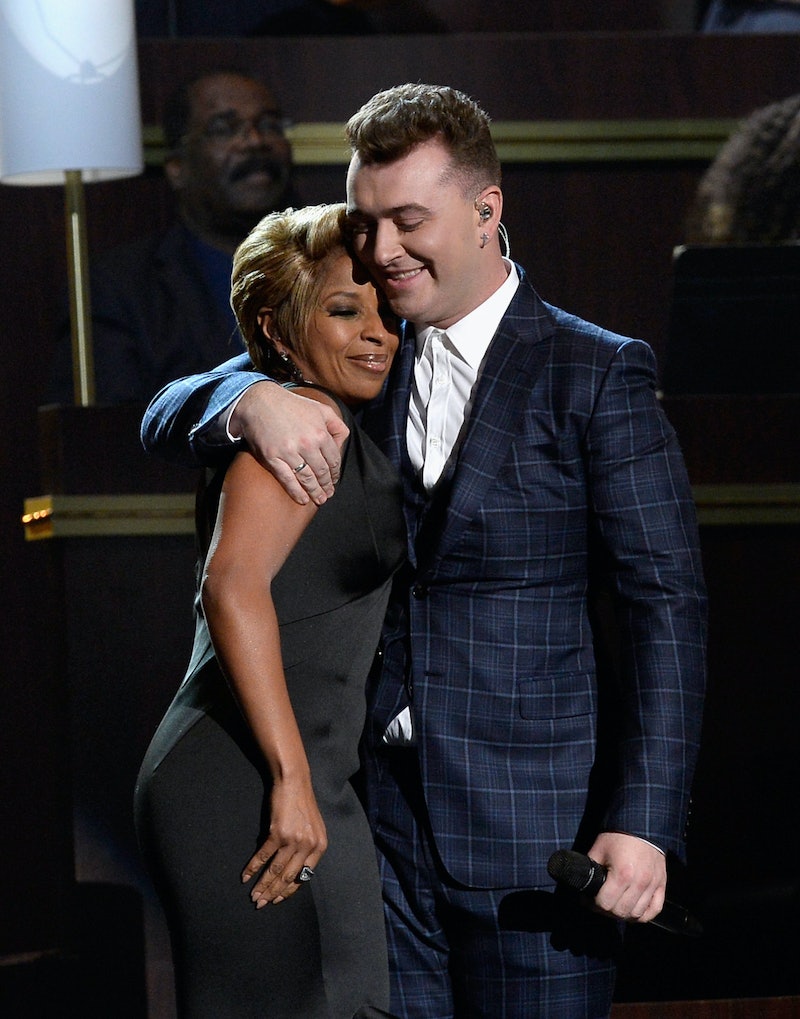 I can't imagine going to a big awards show like the Grammys. There are so many big stars present, and I just know I would get caught up people watching and fanning out. So many celebs took pictures together Sunday night. Whether they were actually friends, just fans, or randomly paired together, these behind-the-scenes photos of the Grammys prove that the awards show was the place to be.

Thank god for Instagram because now we can see the photos from the stars as they happen. Of course, I was scrolling through my Instagram feed during the Grammy Awards commercial breaks. The stars posted too many good photos and really made me feel like I was there — well, almost. I'll take what I can get though. If I can never actually go the Grammy Awards, these Instagrams are all I have.

The stars looked absolutely gorgeous all dressed up, and some were hilarious with their facial expressions and gestures. No matter what was going on, it was cooler than anything I would be doing on a random Sunday, or ever in my life. Check out this round-up of some of the best that Instagram had to offer from the awards show.

Sam Smith was the big winner of the night and he still couldn’t resist posing for a pic with Beatles legend Paul McCartney.

I mean who wouldn’t want to take a photo with that dress? Urhhh… I mean, with Rihanna.

Ariana Grande couldn’t keep her composure when she met Madonna backstage. So precious.

Beyoncé and Jay Z look like the coolest people on the planet while they hold multiple Grammys.

Kim Kardashian supported Kanye West’s rant about Beck’s Grammy win when she captioned this photo of herself with John Legend and Chrissy Teigen. Kardashian wrote “This is the Beck won that award face?!?!?!” That’s kind of rude if you ask me. When’s the last time Kardashian won an award?

Iggy Azalea Instagrammed this photo of Ricky Martin with the caption, “I told Ricky I know a few ladies in my family who would be very jealous of my seat tonight.” Looks like someone is a major fan.

Miley Cyrus and Katy Perry may be pretty polarizing to some people, but they clearly get along well with each other.

It seems like Madonna was pretty excited to pose with Taylor Swift. She captioned the photo saying, “Shaking it up back stage at the Grammy’s with Taylor!!” I am just assuming that she meant “shaking it off?”

It’s nice to see Miley Cyrus and Nicki Minaj getting along. I hope for a collaboration in the future.

Usher posed with music legend Stevie Wonder backstage at the Grammys. Such R&B greatness in this shot.

Anna Kendrick and Katy Perry look nothing but fierce in this photo. I need to be them.

It’s no big deal for Behati Prinsloo to pose for pics with her husband Adam Levine, but she was really gushing over Gwen Stefani with her Instagram caption. Prinsloo referred to the singer as “the most badass and drop dead gorgeous Gwen Stefani.”

Ross Matthews was overjoyed to take a selfie with Nicki Minaj. He captioned the photo with “THIS JUST HAPPENED!!!”

Umm what? Taylor Swift and Diplo are in a photo together. It looks like the feud is over. She is just accumulating those famous friends.

Meghan Trainor was in good company when she posed for a photo with John Legend and Carole King.