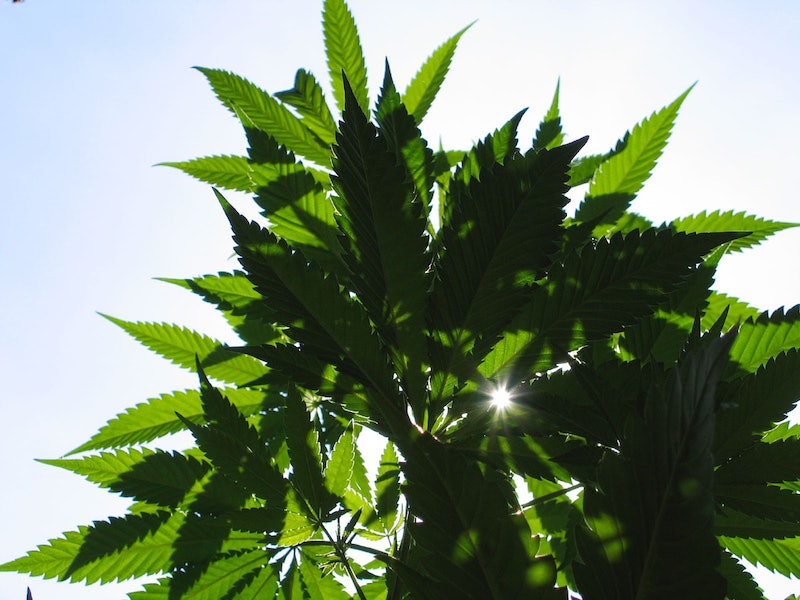 It might sound like a joke, but I'm completely serious when I say I believe God wants us to legalize marijuana. Right now, I'm finishing my studies at Union Theological Seminary, and will hopefully soon be ordained as a minister in the Presbyterian Church — so, for better or for worse, I spend a lot of my day pondering what I believe about God. Recently, with marijuana in the news again, I’ve been spending some time thinking about what God thinks about weed. Here's my conclusion: I cannot believe that God would continue to support the criminalization of marijuana in this country when it is so abundantly clear that keeping weed illegal creates grave problems for so many.

I realize that you might not necessarily agree with me; I kinda feel like writing a pro-pot piece with a religious focus is like sending a treatise on the dangers of animal cruelty to the head of the Michael Vick fan club. Regardless, I'm hoping my input will strengthen your conviction that prohibition is ridiculous. Hey, perhaps it'll even give you a response if you get stuck at a family function talking to some relative who's ranting about how millennials have lost their moral center because they're all hopped-up on that marijuana plant.

According to the Bible, God stands firmly opposed to the sin of racism that so deeply afflicts our nation. The preferential treatment white citizens receive at the hands of the law directly violates the biblical concept of justice — "If you show partiality, you commit sin and are convicted by the law as transgressors." (James 2:9)

Although legalizing marijuana would be only a small step in addressing a far deeper issue, it's undeniable that keeping weed illegal contributes to the racial injustice endemic throughout our police departments and courts. Although a greater percentage of white Americans smoke marijuana, black Americans are far more likely to be arrested.

Once arrested, our legal system disproportionately charges and sentences black men and women, contributing to the New Jim Crow prison system that every day oppresses people of color in this country. Legalizing marijuana would eliminate at least one avenue for discrimination. And God calls time and again to “let justice roll down like water.” (Amos 5:24)

2. God Is Always In Favor Of Healing

The medical uses of marijuana are well-documented. It helps control epileptic seizures; it relieves the nausea induced by chemotherapy; it relieves pain, and it is, frankly, the best cure for a hangover. C’mon, this is such a non-issue that the Surgeon General just endorsed medical weed.

God never supports human suffering, promising, "Come to me, all you that are weary and are carrying heavy burdens, and I will give you rest." (Matthew 11:28) Since marijuana is able to provide such necessary relief, it makes sense that God would support people using marijuana in this way.

Some might suggest, then, that marijuana should simply be legalized for medicinal use, but not recreational use. That, however, would restrict distribution only to those privileged with the necessary health insurance to see a doctor, obtain a prescription, and fill the prescription sans an absurd copay.

For the millions of Americans without medical insurance, legalizing marijuana for recreational use would allow those suffering from any number of ailments to obtain relatively inexpensive medicine. Jesus’ ministry focused on healing those who fall on the margins of society — those the system screws over. If the many congressional representatives who claim they want to be like Jesus truly desire to follow his example, providing a low-cost medical option for a laundry-list of issues is a step in the right direction.

Like, God really hates hypocrisy. Whoever wrote the book of James gets pretty explicit: “If anyone thinks he is religious and does not bridle his tongue but deceives his heart, this person's religion is worthless.”

1 Peter just shoots us straight, saying, “Put away all malice and all deceit and hypocrisy.” To me, it's nothing short of deceit and hypocrisy that alcohol is legal in this country while marijuana is not. No one has ever overdosed on marijuana; the same can't be said for alcohol. Sure, research is unclear on the long-term effects of marijuana use, but we all know the horrifying long-term effects of alcohol abuse.

Despite this, we not only permit but glorify drinking (Super Bowl commercials, anyone?) while, on the other hand, publicly discussing marijuana sounds like we’re debating the pros and cons of letting Freddy Kruger babysit. I can’t get down with people who want to ban all recreational drugs, including alcohol, but at least their argument has integrity. In light of the injustice of marijuana criminalization and the potential medical benefits, the decision of many to condemn legalization efforts but happily endorse drinking is hypocrisy of the highest order.

“Do not be afraid,” is practically the chorus of the Bible. It comes up in the stories surrounding both Jesus' birth (Luke 2:10) and resurrection (Mark 16:6). Get a Bible, read the book of Psalms, and look at just how many times the psalm is telling the reader, “Don’t be scared, dummy." So often our fears are baseless; this could not be truer of the fears surrounding marijuana.

Irrational fear and prejudice were central in the decision to criminalize marijuana in the first place, and the voices arguing against legalization use baseless fears to mislead the American public. Despite the fact that research disproves the claim that marijuana is a gateway drug, conservative voices continue to spread this misinformation to invoke fear.

The Internet abounds with all manner of myths and rumors about marijuana, such as suggesting that smoking one joint is the equivalent to 20 cigarettes — myths that continue to persist long since they have been shown ridiculous. Believing in irrational fears goes against God (particularly a fear that contributes to the oppression of others).

5. God Wants Humans To Enjoy Ourselves

Aside from the patriarchal framing, this is pretty solid advice. Life is hard; work is tiring. If people want to smoke a joint when they get home from a long day how is that worse than drinking a glass of wine? Furthermore, what egregious harm does this inflict on society that it requires us to incarcerate people?

If marijuana is at least as safe as alcohol, if not safer, and is the preferred recreational substance of many (there’s even a dating app for weed enthusiasts at this point), what's the big deal? If smoking a joint is part of how someone enjoys the good of all their labor, then isn't God saying, “Let that person enjoy this gift of God"?

Obviously, there are plenty of issues surrounding legalization that will need to be dealt with — regulating pot in ways similar to how we regulate alcohol, for example, and educating consumers on the danger of driving while high. However, these are readily solvable problems. Given the gross injustice of our present situation, to keep pot illegal based on petty concerns is, arguably, an affront to God and human dignity.