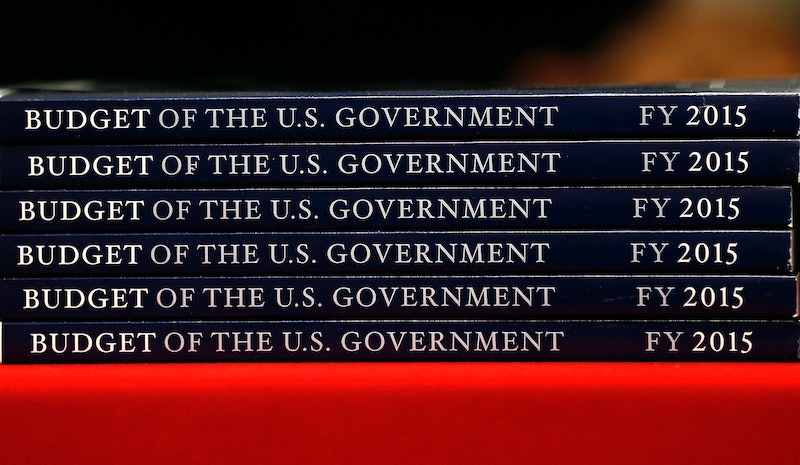 So President Barack Obama has rolled out his proposal for the 2016 fiscal year budget. Where is the money going? If you're a visual learner like me, a handy pie chart goes much further than a dense paragraph of econo-speak in demonstrating where the President's spending priorities lie. Luckily, the National Priorities Project released a report Monday entitled "The President's 2016 Budget in Pictures."

The nine charts included in the report address questions many Americans have about what proportion of the budget's staggering $4.1 trillion allowance will go towards different priorities. Does the President care as much as you do about sustainable energy? What percentage of the budget will fund education? Is military spending going up or down? What cause takes up the largest portion of the proposed national budget? (The answers may surprise you.)

Obama has talked a big talk about improving education standards across the U.S., and he has repeatedly expressed concerns about the country's carbon footprint. But these interests take up a tiny percentage of his proposed budget — only three percent of the total spending budget, combined.

Obama's proposed $4.1 trillion represents an increase of over five percent from the total spending budget for 2015. This includes every kind of federal spending. Of the 12 priorities deemed important enough for federal funding, Social Security, Unemployment and Labor, Medicare and Health, and Military spending take up a whopping 76 percent of all of it, more than three-quarters of all the money. That leaves only $957 billion for all other nine programs. Obama's priorities are clearly outlined here: first is Social Security, second is health, and third (by a significant drop) is the military.

Education only receives two percent of the proposed funding, and energy and the environment gets just one percent of the spending — $52.1 billion. The smallest amount by far goes to science, which receives only $31.1 billion of the total $4.1 trillion.

But there's hardly any fun in just one chart. So what does this spending look like when you organize it in other ways?

So, before, I mentioned the three categories of spending included in the total budget. Mandatory spending makes up about two-thirds of the budget, and its funds are not raised or lowered by Congress. Instead, they are determined by eligibility. This spending is based on existing laws, not the budgeting process itself. To change the amount allocated to certain programs — like the food stamp program — Congress may alter eligibility rules. The eligibility rules determine how much money is spent on these programs depending on how many people quality for benefits.

Obama's budget shows an increase in mandatory spending of over five percent from the 2015 level. Social Security spending takes up almost half of all spending — 49 percent. Medicare and health programs take up the next 38 percent, or about $1 billion, and the rest of the mandatory spending budget is split into tiny percentages for transportation, veterans' benefits, food and agriculture, and the very vague "Other." $44.9 billion is a lot of money to spend on a category of programs called "Other," but that's neither here nor there. (According to the NPP, "Other" includes categories that accounted for less than one percent of mandatory spending each, such as science, education, and energy.)

Interest on federal debt takes up a measly seven percent of Obama's proposed total spending budget. Quite simply, this money goes towards easing the country's federal debt. It doesn't even get a pie chart of its own.

So... What's the Deal with Military Spending?

It's going up, no doubt. But so is non-military discretionary spending. So what's the big deal? According to NASDAQ, the GOP is definitively split on whether the increased funding for the military is appropriate. Senate Armed Services Chairman John McCain (R-AZ) — yes, the John McCain — agrees with Obama on the increase. "If we continue with these arbitrary defense cuts, we will harm our military's ability to keep us safe," McCain said at a January hearing. But Senator Rand Paul (R-KY) disagrees, saying national security is important, but it can't be "a blank check."

I Get It, We're Spending Money. Is There Any Money Coming In?

At a deficit, yes.

The president's proposed $3.5 trillion in revenue would leave the U.S. with a $474 billion deficit. This is actually the lowest national deficit since 2007, before the Great Recession basically destroyed everything. It's on par with what the deficit has been pretty consistently since World War II.

So, yes, we are making money — we're still losing that money, but we're losing less money than we were before. Yay?

Why Do I Care?

Ultimately, the budget Congress passes for FY 2016 may look totally different than the one Obama has proposed, but it's still important to know what your President prioritizes. Political rhetoric is one thing, and his descriptions of his socially-oriented priorities may seem inspiring, but it's important to keep in mind what our government is really spending the big bucks on.