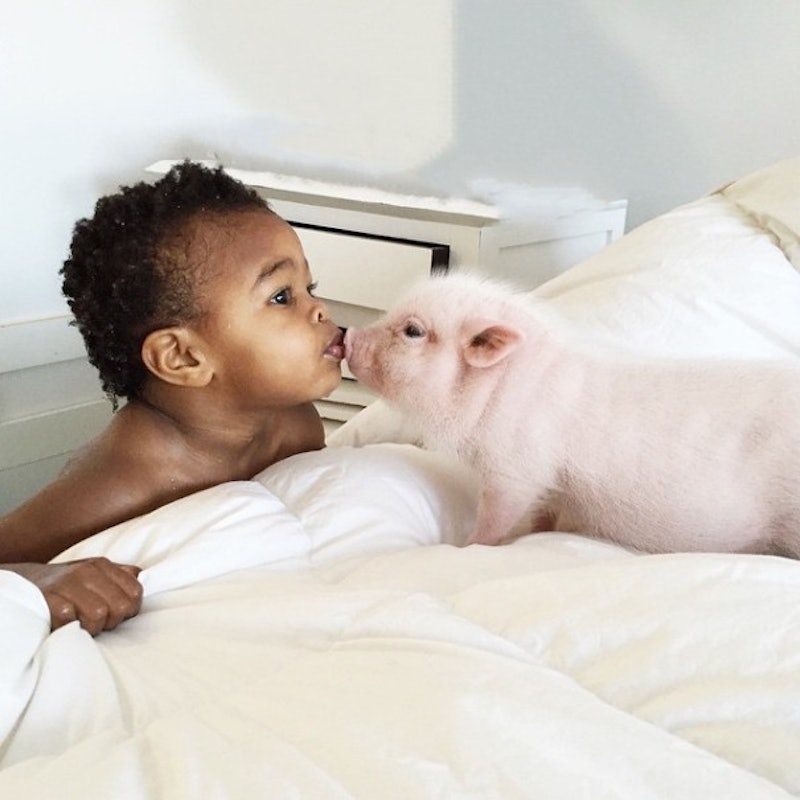 When I was a little girl, I went through a phase where I was convinced that I could live as a princess in an imagined fairy land if only a I had an adorable piggy sidekick. Every adult in my life convinced me that this was but fantasy, and that the idea of having a little pig was much cuter than the actual reality of having one. And I believed them. Of course pigs are terrible pets, and I shouldn't have one. Duh! That is, I believed them until I saw this two-year-old girl who is best friends with her pet piglet. I now realize that everybody lied to me. Pigs are amazing and I'm back to wanting one.

Libby might just be the luckiest (and most adorable toddler) on the planet. Her mother Lindsey runs a photography blog where she captures all things precious and sweet, and her biggest stars are her daughter Libby and their 3-month-old piglet, Pearl. As a full-fledged pink addict, looking at their happy little faces in their chic pink wonderland is basically like seeing part of my soul cloned and put into pictures. Magic is REAL.

Pearl joins the ranks of many famous Instagram pigs, including Priscilla the teacup pig fashionista and Miley Cyrus's pet teacup pig, Bubba. But Pearl isn't here for the fame. She's here for the snuggle love and the surprise piggy kisses with her best friend, as well as her many other family members, including Lindsey's husband, her son, and three dogs, two cats, one rabbit, one tortoise and two of little lambs. They are basically living in their own zoo jamboree and probably throw the best birthday parties you've ever seen. Take a look at Libby and Pearl and see for yourself: