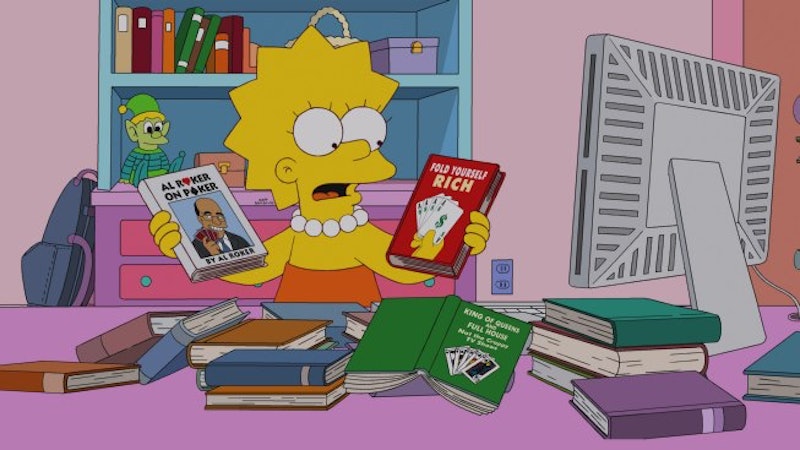 Like so many '90s kids, I grew up watching The Simpsons. Everyday, like clockwork, my brother and I would get home from swim practice, eat dinner, and watch the reruns on FOX (followed by an episode of Seinfeld, of course). Almost as instantaneously as DVD sets took over for VHS, we owned the complete first seasons and re-watched them on every sick day I ever took from school.

Maybe it's because I also had a younger brother that was always more of a punk that I was, a goofy beer-drinking dad that's a sweetheart at his core, and a mom that's such a "mom," but I often found myself relating to Lisa (even though I was a little bit jealous that she was 8 years old and way smarter than me). Lisa, a feminist and activist, questions the people and culture around her, and always stands up for what she believes is right. More so, she does it all with a book in tow. I wonder if Lisa Simpson was an inspiration for Amy Sherman-Palladino when she created Rory Gilmore.

Now that FXX has put all of the episodes online (and, even more recently, made them available on the FXX app for more cable providers), I've been spending some quality catch-up time with my girl Lisa—- and making note of all the titles she reads. If you want to jump into the Lisa Simpson Book Club, I suggest starting with these, all of which you'd be able to find on her shelf:

Sylvia Plath’s semi-autobiographical novel The Bell Jar parallels the author’s own decent into depression. A staple read for coming-of-age women interested writing, poetry, and the mind, I’m a little surprised that it took more than 20 seasons before Lisa picked up a copy — but then again, she is only 8 years old.

After destroying Lisa’s room with fireworks, Bart and Homer make it up to her by spending a day at the Springfield Festival of Books. There, they encounter Stephen King, Tom Wolfe, John Updike, and Amy Tan, who Lisa admires for Joy Luck Club , a novel that follows four Chinese American immigrant families in San Francisco who start a mahjong (for money) club.

Lisa: Ms. Tan, I loved the Joy Luck Club. It really showed me how the mother-daughter bond can triumph over adversity.Amy Tan: No, that’s not what I meant at all, you couldn’t have gotten it more wrong.Lisa: But…Amy Tan: Please, just sit down. I’m embarrassed for both of us.

Master of the Senate by Robert Caro

Also famously seen on an episode of House of Cards , Lisa dips into Lyndon B. Johnson’s time in the congress during (what else) but one of the Treehouse of Horror episodes. Funny enough, Robert Caro later guest stars in Season 24 alongside Benedict Cumberbatch and Zooey Deschanel.

The genres of Lisa’s library are vast. We learn in an episode in Season 23 that though Lisa is a very dedicated fan of the infamous American satirist Kurt Vonnegut, she packs too many books in Homer’s suitcase and has to decide which ones to leave behind. To her own dismay, she ditches Cat’s Cradle — Vonnegut’s fourth novel exploring science, technology, and religion while satirizing the arms race.

Bart: "Do you really need all these Kurt Vonnegut novels?"

Lisa: “They self-reference each other!”

The Brothers Karamazov by Fyodor Dostoyevsky

Yet another title that appears during a Treehouse of Horror episode. Lisa reads to Homer from The Brothers Karamazov — an acclaimed philosophical Russian novel that delves into ethical debates of God, free will, and reason — when he was paralyzed. As Lisa reads from the novel, she realizes (through typical Simpsons humor) that Homer has the ability to communicate with her through flatulence.

Thomas Pynchon’s Gravity’s Rainbow appears in one of my favorite Simpsons episodes of all time — the one where Lisa leads her college-aged gymnastics friends into believing that she’s a fellow student. It’s only fitting that Lisa would geek out about someone reading something and lengthy, complex, and historical as this novel.

Harry Potter and the Sorcerer's Stone by J.K. Rowling

There’s no shortage of Harry Potter references on The Simpsons (J.K. Rowling even makes a guest appearance at one point), and seeing Lisa read Harry Potter and the Sorcerer’s Stone is a good reminder that no matter how well read you may be, and how much more literature you want to explore, sometimes it’s OK to delve into those YA classics.

In an episode called MoneyBart , Lisa studies up on Michael Lewis’ account of the Oakland Athletics and general manager Billy Beane’s analytical approach to baseball and uses similar statistical tactics when leading Bart’s Little League team to a winning streak.

Emily Dickinson is referenced a number of times throughout the series (including one in which Grandpa recounts his days at camp and Lisa asks if he was reading from an Emily Dickinson poem (he wasn’t, he was just describing his day), but the best is when Lisa follows Bart to military school and lives in solitude as the only girl at bootcamp.

Lisa: Okay, I'm not going to give up. Solitude never hurt anyone. Emily Dickinson lived alone, and she wrote some of the most beautiful poetry the world has ever known ... then went crazy as a loon.

Leaves of Grass by Walt Whitman

After a huge windstorm hits Springfield (due to a windmill generator that Homer puts up in his yard), a very large whale is left beached. Lisa names it Bluella and learns to care for it deeply, reading poems from Walt Whitman's Leaves of Grass — a collection influenced by transcendentalist Ralph Waldo Emerson that celebrates the relationship between humans and nature.

The Adventures of Asterix by René Goscinny

Lisa is thrilled when she stumbles upon The Adventures of Asterix, a series of French comics that first appeared in the Franco-Belgian magazine Pilote in the late '50s, on a rack with Tintin at the comic book store. Given that the series follows the exploits of a village of Gauls as they resist Roman occupation through magic potions, it totally makes sense that a history buff like Lisa would be stoked.

In the end, Lisa supports all kinds of books and all kinds of reading — making her one of the best bookworms to ever grace the screen.

More like this
Jessica Simpson On The Time She Was Pursued By A Backstreet Boy & An *NSYNC Member
By The Editors
Rupert Grint Just Shared A *Major* Update About Ron Weasley’s Future
By El Hunt
Flip Phones Are Gen Z's Favorite New Nightlife Accessory
By Maria Santa Poggi
10 Equally Romantic & Heartbreaking Books From British & Irish Authors
By Shahed Ezaydi
Get Even More From Bustle — Sign Up For The Newsletter
From hair trends to relationship advice, our daily newsletter has everything you need to sound like a person who’s on TikTok, even if you aren’t.