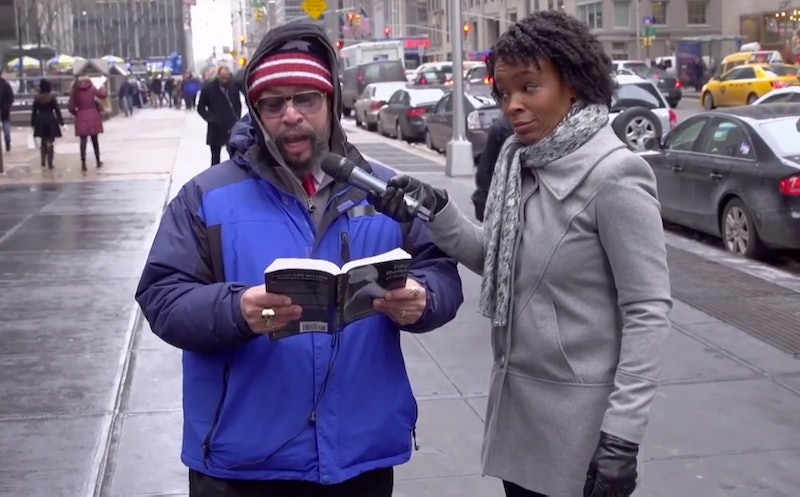 I know that Fifty Shades Of Grey is basically the new obsession in the literary and film world, but let's be real: Though it's very possible that the movie will be great (and, with a director like Nowhere Boy's Sam Taylor-Johnson, it likely will be), the book had some...questionable lines. Honestly, the book read more like Fifty Shades of Second Hand Embarrassment, which is something that everyone feels when they have to read this book out loud. Even Jamie Dornan himself couldn't hide his feelings about the utter absurdity of E.L. James' erotic prose when Jimmy Fallon made him read lines in different accents — and now, to illustrate this fact even more, Seth Meyers took the game to the streets to ask everyday joes and janes to read aloud the sexcapades of Mr. Grey and Ana Steele.

Naturally, it's amazing: two of Late Night's writers, Michelle and Amber, approach a diverse bunch out on the street of New York — mostly older folk, for max awkwardness — and ask them to dictate Fifty Shades lyrics. Some of them are better than others at containing their shock to really put a good inflection on the reading. Others, like a taxi driver, can't stop laughing about all the "holy cows" and the "f**ks." They ask the cab driver, "What do you think?" to which he replies, "That guy means business." A pretty accurate description overall.

So would any of them read the book? One man who looks like Santa Claus in a leather jacket, said he might, but only if he "were in the mood to be titillated." Fair.