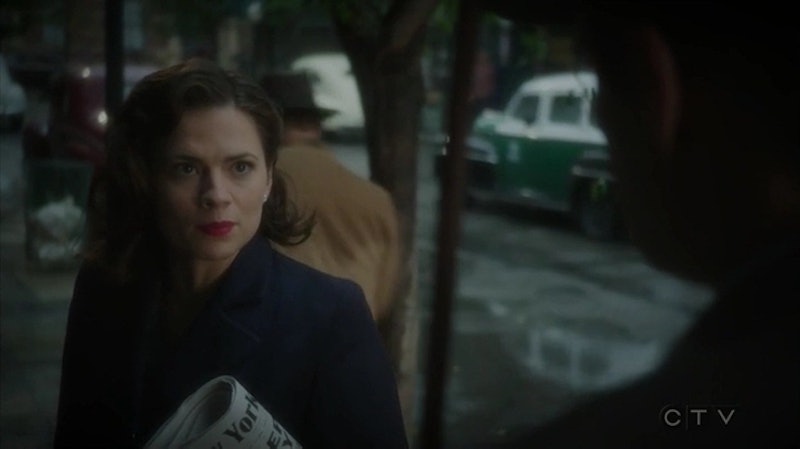 The action is building to a head on Agent Carter and I could not be more stressed out. I thought Peggy was about to be tortured by the Ghost Of Black Widow Past also known as Dottie Underwood. However, what happened at the end of this week's episode was devastating in a different way. Agent Carter has been arrested by the SSR for treason and her interrogator is none of other than the sad eyes of the once smitten Agent Daniel Sousa. Is there still hope for them to fall in love? He called her Margaret. My heart is broken.

Convincing Sousa and bringing him over to her side seems to be Miss Carter's best chance at this point. Unless Angie Martinelli has a plan up her sleeves, Peggy is in a tight spot. Unlike Angie, who was thrilled to have a neighbor with a double life, Daniel seemed mighty betrayed that Agent Carter isn't who she said he was.

Even if Peggy might be able to convince Sousa that she's a good person with the world's best interests in mind, there are still so many other factors. Leviathan has already infiltrated the building, and I didn't forget Dottie's weird Peggy Carter impression from last week's episode. What's going to happen to Steve Rogers' blood? Our favorite Agent's fate isn't the only thing that's at stake here. Now the SSR has the blood vial.

One big problem is, can we really trust Howard Stark? Both Peggy and Daniel are excellent judges of character. Sure, Howard Stark isn't the nicest guy, but as any Into the Woods fan will tell you, "nice is different than good." I want to believe that Howard and Jarvis aren't setting Peggy up for treason. We do know that after this is all said and done, the two of them will skip off into the sunset and form S.H.I.E.L.D. together. But what's the cost?