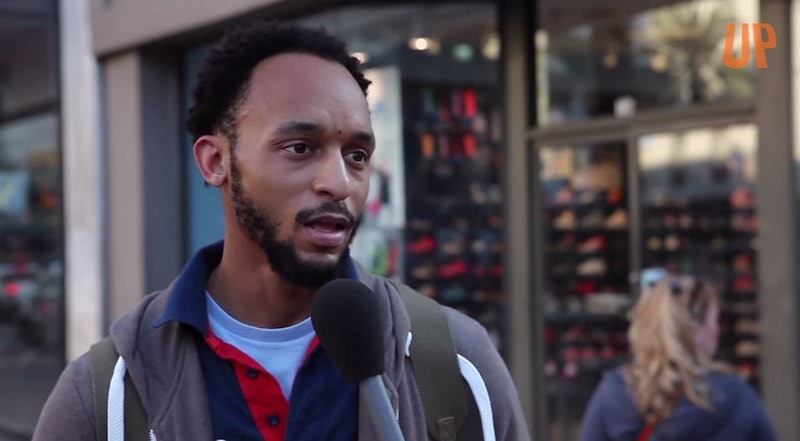 The question of whether or not men can be feminists has been around since the inception of modern feminism, but no matter how you feel about the debate, I think we can all agree that it's unspeakably frustrating when men automatically say they aren't feminists, as though being a feminist would be crazy. Which is why this video of men figuring out that they are feminists after all (at least in a general sense) is pretty great.

It's not easy figuring out where guys fit in feminism — although intersectionality is good for everyone, feminism is often understood solely to be about the liberation of women. Obviously that's a huge part of it; as such, it makes the most sense for women to be the ones determining what we need for ourselves. Plus, there's an unfortunate history when it comes to prominent male feminists of these men trying to speak over female feminists or engaging in abusive behavior. Feminism obviously doesn't do any good if the movement itself is going to replicate the very power imbalances and injustices we're fighting against.

Still, while the discussion around the place for male feminists is ongoing, I've always believed that absolutely everybody should be on board with the things feminism is about. Everyone can be a feminist — but the fact that so many people haven't realized this is frustrating. Which is why this video is pretty great.

In the video, which was created by Upworthy, men were asked a series of questions, and their answers were illuminating. Here are some highlights; scroll down to watch the whole video.

"When You Hear The Term Feminism, What Do You Think Of?"

In a pleasant surprise, most of the men in the video talked about equality and women's rights, with several especially stressing equal pay. The subject of bra burning or body hair didn't come up once.

"Would You Ever Consider Yourself A Feminist?"

When faced with this question, though, some guys weren't so sure. Answers ranged from immediate "no"s to uncomfortable "I don't thinks so"s to outright laughter.

"Why Do You Think You Wouldn't Consider Yourself A Feminist?"

It seems that for some guys, not being a feminist is partly about not really being clear on what feminism is. But this guy is quick to assure us he does love and respect women.

When Faced With The Real Definition Of Feminism

Once the real definition of feminism is explained — that it's about equality for men and women — more guys definitely seem on board.

"How Would You Feel To Realize That You Were A Feminist?"

And when told that they in fact seem to be feminists already? The guys in the video seem pretty cool with it. One even takes it as a major compliment.

So you see? Maybe male feminism isn't quite as rare as we think it is.

You can see all the response in the full video below.