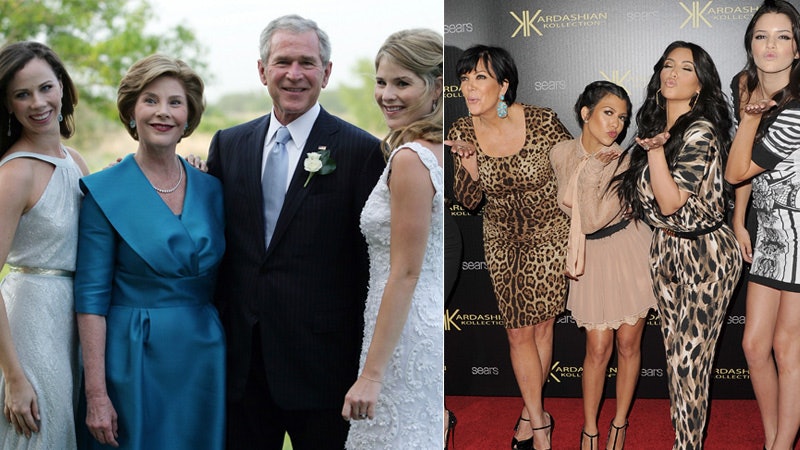 Two families have carried the United States through the 21st century. One is a group of eccentrics who has led citizens to think about what it means to be American, how to successfully navigate capitalism, and what our priorities are as a nation. The other is the Bush family.

Yes, the Kardashian clan — how do the Jenners feel about being included in that? Do they ever wish someone would talk about the Jenner clan? Food for thought — is a driving cultural force in our country. They are probably the most famous family around, and they're definitely some of the most shrewdly business-oriented people in Los Angeles.

But arguably, the Kardashians could never have achieved their sky-high success were it not for the original American family: the Bushes. The two Bush presidents helped shape a modern country where people really do believe in progress. Most recently, George W. Bush was a staunch believer in the American dream and the free market. Toward the end of his second term, Bush the younger even gave "an impassioned defense of free-market capitalism."

So it's no question that if George W. Bush were a Kardashian, he would be Kim — she's the most famous and probably would also be voted most likely to make up words, but there's something deeper there. Kim is the epitome of American fantasy and an icon of capitalism. "Kim steadfastly refuses to sell anything but herself. Or, to be more specific, she refuses to sell anything but the image of herself," The Atlantic writes. "She is a person who is also A Way of Life. She is her own ecosystem. She is her own value system."

So what Kardashian would your favorite Bush be, had they been born in only slightly different circumstances? The question has been plaguing us, too.

Note: Please disregard the actual familial roles of each individual. If you think too much about it, you will notice that some people are married to their parents in their new roles. In addition, not every member of the Bush family will be featured. Don't think too hard.

Bruce and H.W. each fulfill something of a figurehead role in their respective families. Yes, they are the heads of their households by patriarchal standards, but their children receive more media attention than they do. They also look similar.

Kind of confused, but also dignified with excellent bone structure. Also, in each of these images, Bush and Jenner are staring meaningfully into the distance.

There's no doubt about it: Laura is the momager of the Bush family. She was one of the most popular first ladies, politically involved in both national and global concerns. Even though she may not have been in the spotlight, she sure made the effort to be, and that's why she's a Kris.

As the children of famous fathers, North and Jeb have big shoes to fill. They both have relatively simplistic ideas. North is a baby, and Jeb is all about what's simple — he abbreviated his full name, John Ellis Bush, to "Jeb" because it's an easy acronym, and he advocates for a "simple role" for the federal government in education. Also, they both have inarguably odd names.

Although Barbara and her sister Jenna are fraternal twins — much like Kendall and Kylie may appear to be — Barbara is slightly older. Like Kendall, she follows typical eldest-child patterns: She is highly ambitious and generally characterized as the lesser-known twin. Barbara is totally a Kendall — Barbara has worked to legalize gay marriage, and Kendall once went to a gay bar with Harry Styles.

Jenna commands slightly more attention than her older sister, Barbara. As a correspondent for NBC News, Jenna's in the spotlight at all times. Another thing about Jenna that put her in the news was her "dream wedding" to Henry Chase Hager in 2008. Kylie can definitely relate. She's become a media darling lately because of lots of speculation about whether she has had plastic surgery, and she has a dreamy boyfriend too, if Tyga is your type.

As explained above, George W. and Kim are a match made in heaven. Alhough they rightfully ought to be merged into one person, the two would probably have some productive conversations if they were ever to meet face to face. Who has a stronger personal brand? Who is more quotable? What are your thoughts on mermaids?

Barbara Bush has had to put up with a lot as matriarch of her politically legendary family. On the bright side, her husband George H.W. did name a plane after her, something I'm sure Disick wouldn't mind. Both Bush and Disick are relatively under-appreciated in the scheme of their extended families, both of which have complex relationships and power across the U.S., but they know what their role really is.