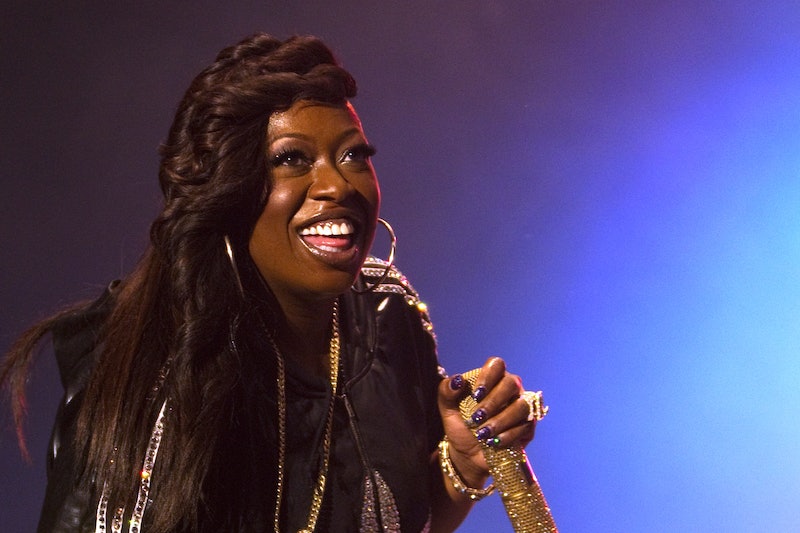 Ever since the Super Bowl aired, numerous expressions of gratitude have come from Missy Elliott, who admitted to shedding tears of joy in response to the overwhelming praise she received from fans after her standout Super Bowl halftime performance with Katy Perry. I mean, Missy's show was so good that it almost made me forget about Lenny Kravitz — almost. Anyway, if Missy's crying now, then this next bit of news will have all of us weeping huge crocodile tears of sheer anticipation and excitement. Billboard reports that on Tuesday, Missy Elliott hit the studio with Timbaland and she shared a photo on Twitter to prove it. Missy captioned the post, "Me & @Timbaland bk 2 the drawing board studio dirty beats." I think I speak for Missy Elliott fans everywhere when I say, c’mon with the new music! I've been on the lookout since last February when she hinted at new music, and again in July when Timbaland said Missy's new album would arrive soon.

Could all this teasing be a part of Missy's devious little plan to get everyone ready to buy her new album? If that's the case, I'm here to tell ya Missy, it isn't necessary. Feel free to hit us with the hee (remember when she used to say that?) any time you please.

I can't stand the rain either, but hey — gotta love this song.

Get Ur Freak On

Missy let everybody know she had no shame in gettin' her freak on.

Rapping about beepers is about as throwback as it comes, but who cares? We're talking about Missy, here.

Maybe it's the energetic Fatman Scoop ad-libs, Ciara on the chorus, or the crazy beat, but "Lose Control" grants anyone permission to shamelessly bust a move, no matter where you are. Oh yeah, and the video is a masterpiece.

Even though Missy used "Gossip Folks" to shut down the haters, she didn't skimp on beats or the bars and the Ludacris feature took it up a notch.

Long before 2014 was declared the year of the Booty, Missy and her reversed lyrics showed appreciation for having a nice "badonkadonk."

This track should definitely be added to the list of best celebs who dissed their exes, even though I have no idea who Missy's referring to.We're patiently waiting on that new music, Missy!