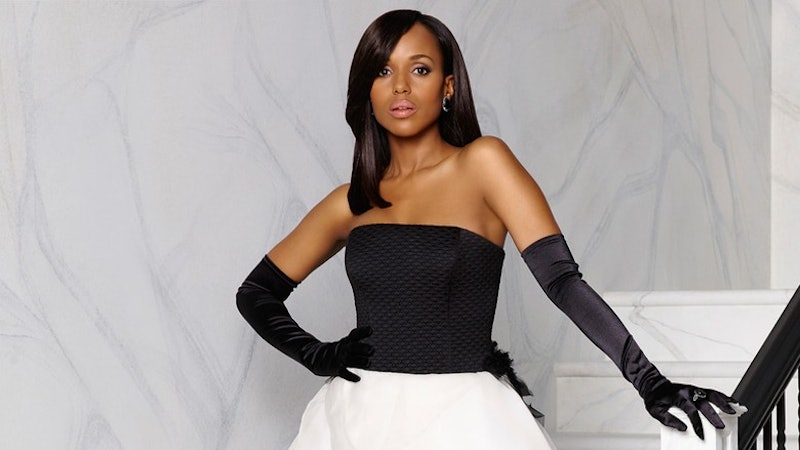 As anyone who's been watching has known and been freaking out about since December, Olivia Pope has been kidnapped. But now that her kidnappers have double crossed the vice-president and put her on the open market, there's a new question: Who has won the auction for Olivia Pope? Because we need to know!

According to psycho kidnapper Gus, who has taken control from the much more intelligent and rational Ian, Olivia has been purchased by Iran. But this isScandalso you know there's bound to be a twist somewhere. Especially since Mama Pope is involved. And since Quinn left her alone in a room with a cell phone. That she could reach. With her hands.

And Quinn was showing such promise of really being useful nowadays.

So is Ian playing a double game? Was he just messing with Olivia when he told her about Iran? Will he change his mind with a sudden better offer? Have his tech guys tricked his in an effort to keep him from double crossing him? Was he tricked by Mama Pope and her terrorist associates intothinking that he was selling her to Iran? Or does Mama Pope have nothing to do with it at all, and the twist will come from some other, unknown source?

Or, you know, maybe Iran really is going to get ahold of Olivia. That certainly can provide enough drama all on its own.

Personally, my money is on Mama Pope. After all, no one has ever been able to predict her, and did I mention the part where Quinn left her alone with a phone? That woman can do a lot with a phone. And even though Olivia is her daughter, Maya Pope/Marie Wallace also a ruthless international criminal serving a life sentence under prison conditions that are probably as harsh as possible. In other words, she has plenty of motive to want the leverage that is Olivia Pope, daughter or no.

But as always, only time will tell. But if there is any justice in the world, Olivia will be home where she belongs soon. Maybe helping plan Mellie's presidential campaign.