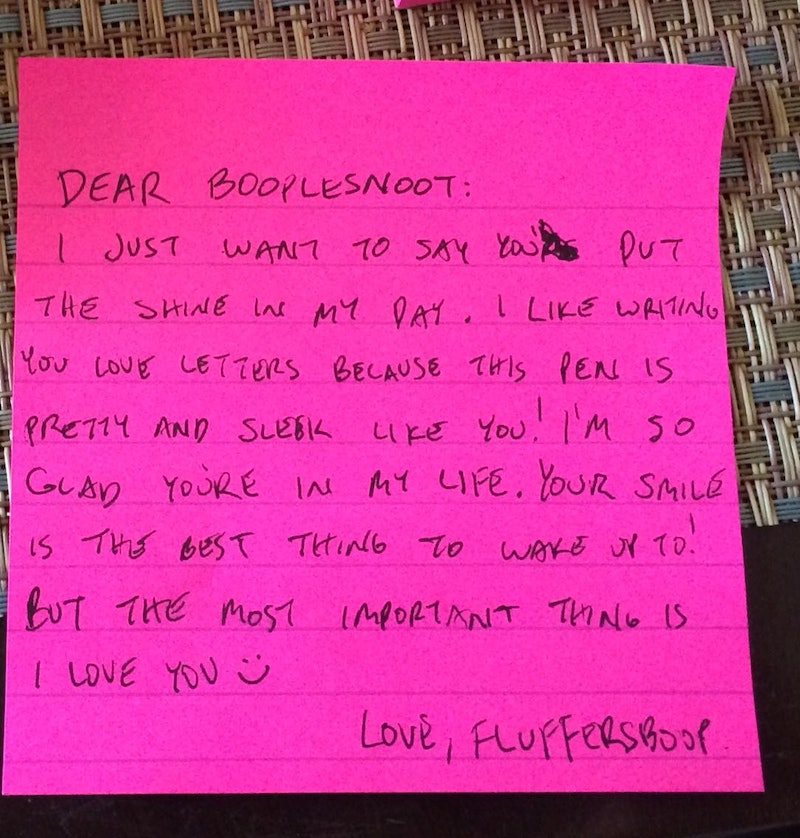 As a romantically-inclined human, I've often wondered what it would be like to receive hordes of letters from Ryan Gosling every day for a year, or what it would be like to get a letter like the one Johnny Cash sent June Carter that just won most romantic love letter of all time. In none of my whimsical fantasies, however, did I envision receiving anything quite like this letter a boyfriend asked with a hidden sex request encoded within it. Without the nifty decoder, the request is about as subtle as subtle gets, but once you see its true message, it is pretty much impossible to let it leave your brain.

The letter was shared on Reddit by "Booplesnoot," the letter's recipient (who is clearly already having a more romantic Valentine's Day than the rest of us), and has raised a lot of questions, including and not limited to: Why are their pet names Booplesnoot and Fluffersboop? If they marry, will they combine their last name to Booplesboop? Where did he get the "really sleek pen"?! And (I guess) the most important question of all: did this ruse work?

I have to say, regardless of what happened next on the spectrum of shrugging an okay to initiating a verbal smackdown, this was one ballsy (HAHA help) move, and it probably took more prep than most guys are going to bother doing for their significant others' Valentine's Day this year. At least he (sorta, kinda, in an immature, little brother kind of way) cares. Here's the clever note in its full glory:

And here is the secret message that probably took an embarrassing amount of time to plan and carve out:

Happy Valentine's Day, everyone. May we all one day find the Fluffersboop to our Booplesnoot.