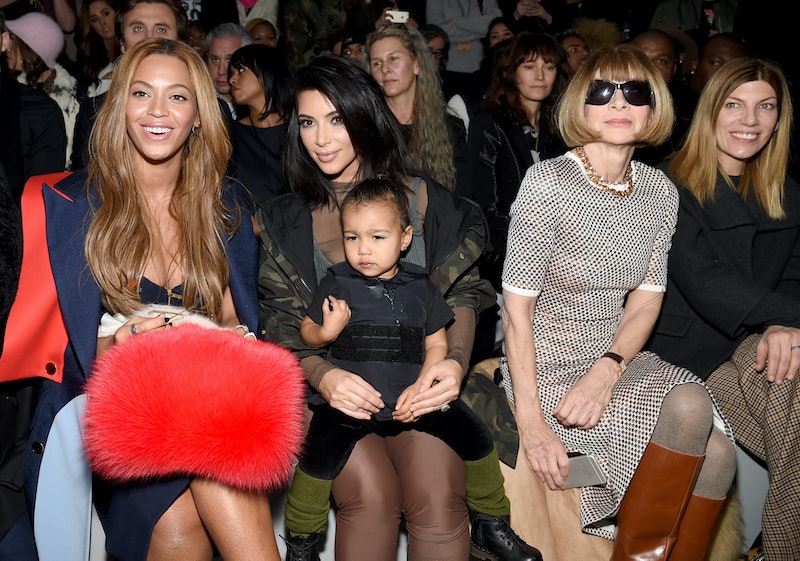 New York Fashion Week is taking over the city with celebrities rushing into the back doors of shows, street style stars populating, well, the streets, and designers taking the runway to present their fall/winter 2015 collections. One of the most-anticipated collections was certainly Kanye West's collaboration with adidas, which showed on Thursday and was the rapper's debut at New York's Fashion Week. Although Taylor Swift deferred her invitation, West was supported by an army of famous friends and family, including Kim Kardashian, who donned one of the looks from the show, a wailing North West, Jay Z and Beyoncé, Rihanna, and Anna Wintour (who sat next to a wailing North West). But, surprisingly, one of his A-list guests wasn't wearing Yeezy!

Although everyone was obviously there for Kanye West's collection, which included tattered sweatshirts and the previously leaked Yeezy 750 Boosts, Beyoncé's look, designed by Charles Harbison, really stood out. Harbison is the creator and designer behind his eponymous clothing line, and the mastermind behind that mosaic coat, embellished bustier and pencil skirt that Queen Bey wore on Thursday night. Although his name might be new to some, Harbison has been making the rounds for some time now, presenting at MADE's Fashion Week and other venue's across the nation. He's been featured in numerous publications including VOGUE, Essence, Elle, Refinery29, InStyle, and, yes, right here at Bustle.

True to his roots, the designer, who originally hails from North Carolina, often draws inspiration for his collections, which are filled with vibrant colors and clean tailoring, from his mother. And his upcoming spring 2015 presentation proves just that with Cinderella blues and Belle yellows sprinkled through the collection. Harbison will be presenting at MADE Fashion Week next Tuesday and, of course, inquiring minds are anxious to know if Beyoncé will be making an appearance.