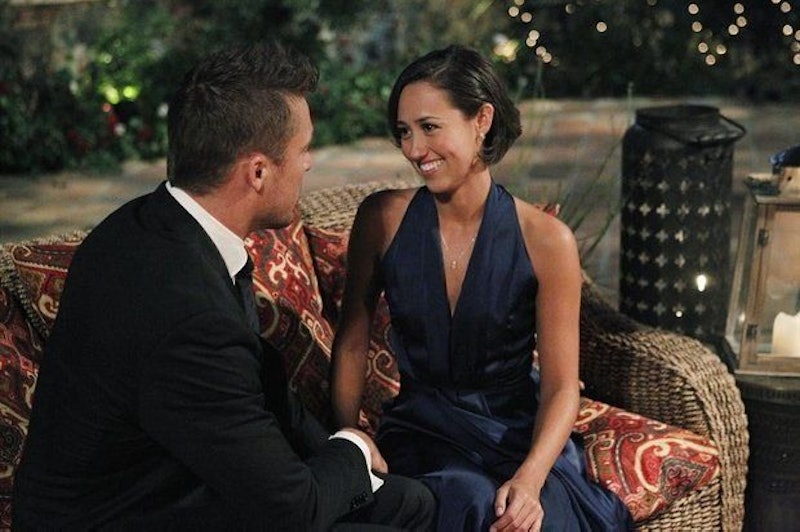 Guys, she has spoken. And by she, I mean Kelsey Poe, the resident Bachelor "villain" who was eliminated last week after one of the most brutal two-on-one dates ever. On Sunday night's tell all special, Kelsey sat down with our faithful host, Chris Harrison, to talk about her experience on the show, mostly because every time Kelsey opened her mouth, more question marks appeared in just about everybody's heads. Unfortunately for Kelsey, her interview did nothing to make her audience more sympathetic to her, which I suspect was initially her goal. In fact, just about everything Kelsey said on the special proved that she is just as deceitful as she originally seemed to be.

First up on Chris Harrison's agenda: That time she snuck into Chris Soules' hotel room to tell him about her late husband... and get a little makeout sesh on the side. When Chris H. called her out on it, Kelsey insisted that "it's not sneaking" and that the other women were fully aware it was going to happen at some point. You know, except for the fact that Kelsey explicitly told Chris that she was "stealing this time" and that nobody knew she was in his hotel room. Strike one.

Next up: The infamous panic attack, which Kelsey maintains was totally real. She insists she lost control of her body after being overcome with emotion, and that's all there was to it. And then, Chris called her out once again on how quickly she seemed to recover from the panic attack... and Kelsey explained that she was very shaken and was only laughing because she didn't quite know how to react after that happened. Um, Kelsey? You were laughing about collapsing on the ground minutes after it happened. I'm not convinced. Strike two.

And now, of course, strike three, which officially means Kelsey's attempt at pleading her case has failed: When she told Chris that she has nothing but respect for Ashley I., who she (rather immaturely) tore down on the two-on-one date, mocking her makeup and clothing by saying she should "go play dress up." And then, you know, there's the part where she actually said she thinks she is better than Ashley. Oh, Kelsey.

The bottom line: Bad editing or not, Kelsey still appears to be the same person she seemed to be on The Bachelor. But points for trying to convince us otherwise?