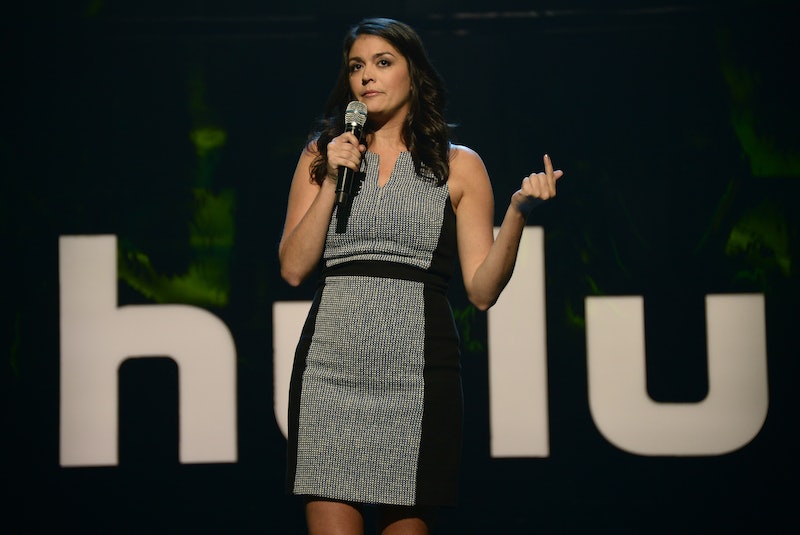 On Sunday night's SNL 40 mega-blowout, the general mood was one of nostalgia, reverie and appreciation by the show's stars, former hosts and the enduring characters that sprung from SNL (party on, excellent). One of the best parts of the show was the female-bossed Weekend Update, hosted by former female anchors Tina Fey, Amy Poehler and Jane Curtin — but there was an elephant in the room that came from Cecily Strong's absence. Where the hell was she?

Strong only hosted Update for one season, first with Seth Meyers and then with Colin Jost before she was replaced as an anchor by newcomer Michael Che. Though fans were upset to see her leave the Update desk, Strong responded gracefully on her Instagram saying she was excited that she could appear on Update in a "looser, goofier way that is a lot more fun for me." But why not pay tribute to her during the SNL 40 special, as she was one of only a handful of women that has sat behind the Update desk?

And if not as a host alongside Poehler, Fey and Curtin, then at least as "The girl you wish you hadn't started a conversation with at a party," Strong's best recurring character on Update. She's also done the great "One dimensional female character from any male-driven comedy," slamming the ideal of the manic pixie dream girl that's been working in your office all along.

Strong is also part of an extremely talented current female cast on Saturday Night Live, standing among greats Aidy Bryant, Kate McKinnon, Vanessa Bayer and Sasheer Zamata. They've carved out a niche with their hilarious music videos. Do you still know the lyrics to "Do It In My Twin Bed?" The glorious Kate McKinnon was nominated for an Emmy for writing the music and lyrics to the bop.

It's easy to make a case for Strong and lament her absence from the Update sketch. They clearly looked over a breakout talent—in fact, Strong is hosting the White House Correspondents Dinner next year, making her only the fourth female host ever. It's unclear why she was missing from the host seat, especially because we can't imagine her rapport with the other women would have been anything other than stellar.

It's especially disappointing that, while the Update segment was aware of the show's history of usually having men anchor the news, they didn't honor one of the most recent hosts who was only in the chair for a short time. And it's also disappointing that next Saturday, we'll be reminder of what a boys' club Update is. We missed you, Cecily. You're still strong!