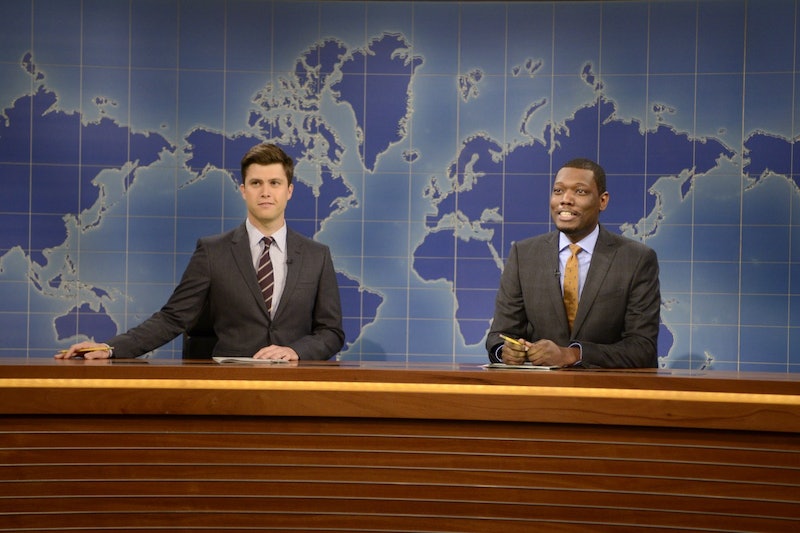 When Tina Fey and Amy Poehler co-anchored Weekend Update 10 years ago, they became the first and only all-female team in Saturday Night Live's history, which made for a moment that, even now, remain worthy of major commemoration. By contrast, Weekend Update now has two male anchors in Michael Che (who replaced Cecily Strong) and Colin Jost — another first for the faux news segment. But according to unconfirmed reports, that history marker is one that the show's female cast members aren't quite prepared to celebrate: Per sources speaking to the NY Daily News (and by "sources," read "these are totally unconfirmed rumors"), some SNL stars strongly oppose the latest Weekend Update lineup change. Allegedly, newcomer Sasheer Zamata is among the vocal proponents of Lorne Michaels' decision to feature the all-male desk.

According to the paper, a source close to the show revealed Zamata's frustration with the recent change. "She was saying that it’s bulls**t, that in 2014 there would be two males and no women in such a prominent position on the show. She said that there should be at least one man and one woman or, if anything, two women."

At this point, rumblings from the cast members are strictly based on hearsay and should be taken with a grain of salt — but it's worth saying, if they do turn out to be true, their concerns are more than valid. Despite its popularity, SNL continues to grapple with its diversity issues.

Perhaps, Michaels is still dead-set on limiting the number of female cast members, as he told the New York Times last December. But considering the fact that it's 2014, the show's been on the air for 40 years, and there's not exactly a shortage of female comedic talent — Cecily Strong, Aidy Bryant, and Sasheer Zamata are just a few of the standout female cast members on SNL alone! — fair representation shouldn't be too much to ask for. If the women on SNL are outraged over what appears to be another diversity setback on the show's behalf, then they certainly have every right to be.