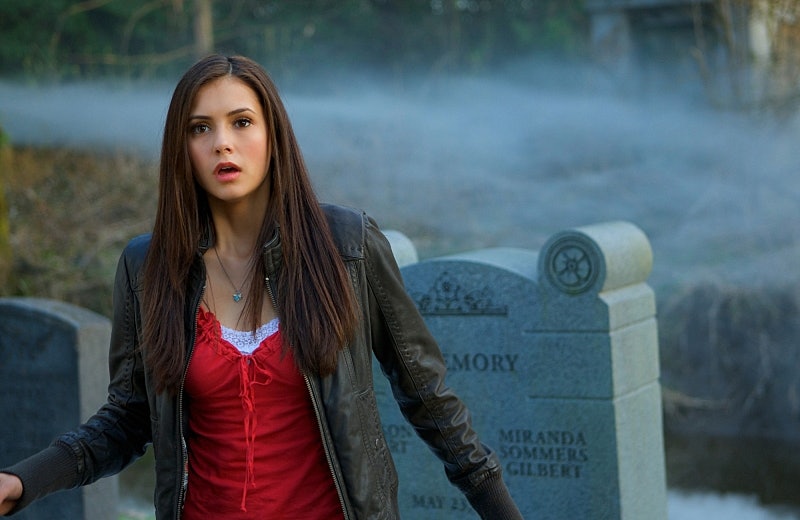 Who's in the mood for a small Virginia town filled with all kinds of supernatural drama? I sure am and was, because I just re-watched The Vampire Diaries pilot for the first time in years. It's been six years (time sure flies when you're wrapped up in the lives of vampires, witches, werewolves, and hybrids), since TVD first came into our lives, and I still can't get enough of the show starring Nina Dobrev, Paul Wesley, Ian Somerhalder, and many other beautiful and brilliant faces.

Ever since that first episode, the characters have grown, the storylines have changed, and the show has evolved in a fantastic way. I really wanted to see how much the series has unfolded, so that's why I re-watched the pilot. First, all of the characters pretty much look the same, except for looking super young (not that they're old now). Also, it's funny when you go back and re-watch something how much you pick up on that you didn't notice before.

With that said, I took it upon myself to analyze the pilot and see if there any details you and I might not have noticed the first time around. Well, guess what? I found nine different items that some fans probably didn't take note of (or remember) from that very first episode of TVD.

So, here they are, and prepare to be mind-blown (not really, but just pretend that you are).

Delena Was Destined For A Magical Journey

Anyone else forget that Damon had some magic tricks up his sleeve? Not only did he conjure that crow and fog to appear whenever he was around, but it was his way to spy on Elena. For those who don't remember, Elena encountered that crow in the cemetery and swatted it away. Yep, Delena was always destined for a magical, dramatic, love/hate journey, which, in the end, brought them together.

It's Stefan AND Elena's Story

When the pilot opens, Stefan is narrating and says, "This is my story." I think people forget that the show has always been told from the point of view of Elena and Stefan — and their diaries, which isn't really relevant anymore. As more and more characters started to take the forefront, stories changed and overlapped. However, Stefan and Elena have been at the front and center since the beginning, and will continue to be, until one of them dies (*fingers crossed* that doesn't happen).

The pilot opens with a couple driving. Soon enough, they encounter a mysterious figure, aka Damon, who kills both of them. This scene definitely foreshadows what's to come — that all Mystic Falls roads are dangerous and very bad things happen on them, so everyone should never drive and remain inside. Think about it... how many people have gotten in an accident and/or attacked on the town roads? Yep, a lot.

Happy is not a word you hear very often on TVD, but it's prevalent in the pilot. Pretty much everyone is happy, save for Jeremy and Elena grieving their recently deceased parents. There are smiles and laughter! Plus, the characters are mainly concerned with school, relationships, and parties. Now, everyone is fighting some kind of evil and super depressed. At least we got a little bit of TVD happiness when the show began.

Steroline Was Always Meant To Be

Caroline has always had her eyes on Stefan. In the first episode, Caroline was basically drooling over Stefan, and even told Bonnie, "We're planning a June wedding." Now, Steroline are totally into each other. Despite Stefan telling Caroline they were never "gonna happen" in the pilot, that was clearly all a trick to deceive viewers that these two would end up together (and hopefully for good).

There Were Actual Mystic Falls

The town is named Mystic Falls, so where are the falls? Well, we actually see them in the pilot! Who knew there waterfalls in the cursed town?!

First, yes, that is Jeremy's nail polish you are staring at in the above photo (remember, he used to be emo). Second, those are not the mama and papa Gilbert we remember from the Season 3 finale, which makes sense seeing as casting choices change as a series go on, especially if it's during a pilot.

The Gilbert House Isn't The One Elena Burned

Like casting, scenery and set designs always change. As you'll notice above, the original Gilbert house is much different than the one we watched for four seasons, until Elena burned it down, because she couldn't deal after Jeremy's death.

Thank you, TVD , for always playing amazing music. From that very first episode, the show sucked people in with it's great song choices. For those who don't recall, these were the artists used in the pilot: OneRepublic, The Fray, Mat Kearney, Katy Perry, MGMT, The White Stripes, and The All-American Rejects, among many others.