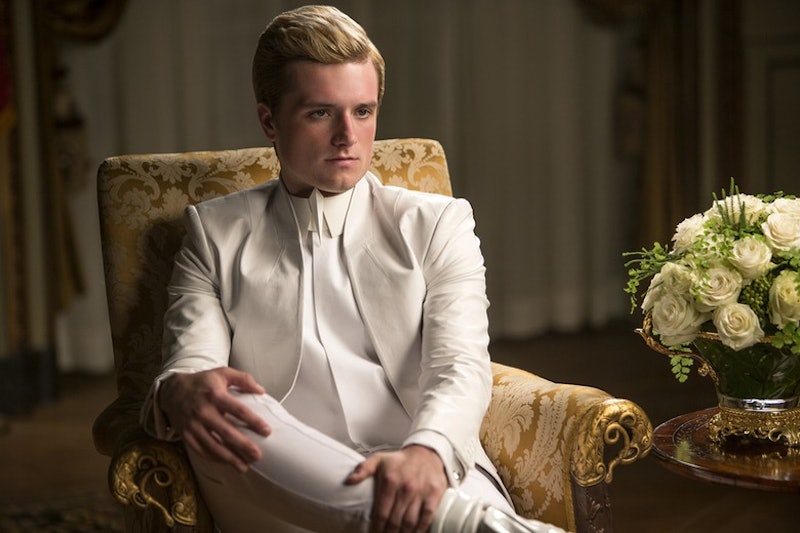 There are so many unanswered questions from The Hunger Games: Mockingjay — Part 1 after such a cliffhanger ending. With the final book in Suzanne Collins' series split into two films, fans were left on the edge of their seats after Peeta attacked Katniss; it wasn't quite the happy reunion anyone was expecting. Although Josh Hutcherson didn't lose weight for the role — it was all done with CGI, much like Kristen Stewart in the Twilight Saga: Breaking Dawn movies — that doesn't mean Peeta is fine and dandy in the second part of the movie. So, what does Peeta look like in Mockingjay — Part 2? He's frail and thin and scared out of his mind, for starters, and it doesn't get any easier for him as time goes on.

I could sit here and spoil the entire book, but instead, I'll just link to some hijacked Peeta quotes from Mockingjay to explain what happens to him in Part 2 . Read at your own risk. We saw a glimpse at how terribly Peeta was treated at the end of Part 1, but we get an even closer look once he starts recovering. Because of what the Capitol did to his mind, he sees Katniss as an enemy and someone who causes him great pain. All of his memories of her are now replaced with terrorizing ones, turning him into a weapon against District 13. However, he does start eating again — carb-o-loading for the former baker boy, of course — and doesn't stay that fragile forever. Phew.