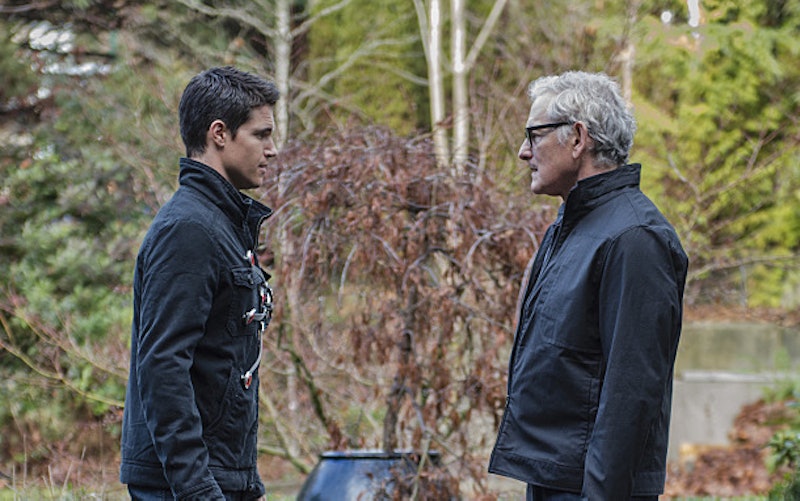 As predicted, Firestorm became two different people again on The Flash, as Ronnie Raymond and Doctor Martin Stein were separated. And just like anyone who's been in close quarters with someone for a little bit of time, the two of them come apart hating each other. It doesn't last for long, though, when Ronnie and Stein realize that they're still joined together in more ways than one, and not just over the newfound shared love of pizza. But where's Firestorm going now?

After re-fusing back together, Ronnie and Stein realized that they do in fact need each other to survive. They can't be the full and complete package of Firestorm without the other — basically, no flying, no fire, no superpowers. It's a lot to swallow, especially since no one, including Harrison Wells, is even sure that they'll be able to un-fuse, and then re-fuse again and again. Turns out, though, that they can. Ronnie and Stein can go from two to one through a nifty Firestorm handshake, and suddenly the flying and fire is back. But they can't stay in Central City like this.

Even though they've just been reunited with their loves — Caitlin Snow and Clarissa Stein, respectively, now just realizing that their initials are both CS, huh? — it's time to head out again. Both bid adieu to their partners, and it's casually mentioned that Stein has a colleague somewhere who might be able to help them figure out their Firestorm powers/problems. It's casually mentioned that Pittsburgh sounds like a good place to check out.

Conveniently enough, in the comics, Stein is actually a college professor in Pittsburgh, at the (fictional) Hudson University. Guess who enrolls in Hudson University upon high school graduation? Ronnie Raymond.

Who knows that Stein and Ronnie will find in Pittsburgh — and possibly Hudson University — on The Flash. But now that we know that they're two parts of Firestorm, and headed to a place right out of the comics, it's time to start pouring over a thousand DC comics to find out more.