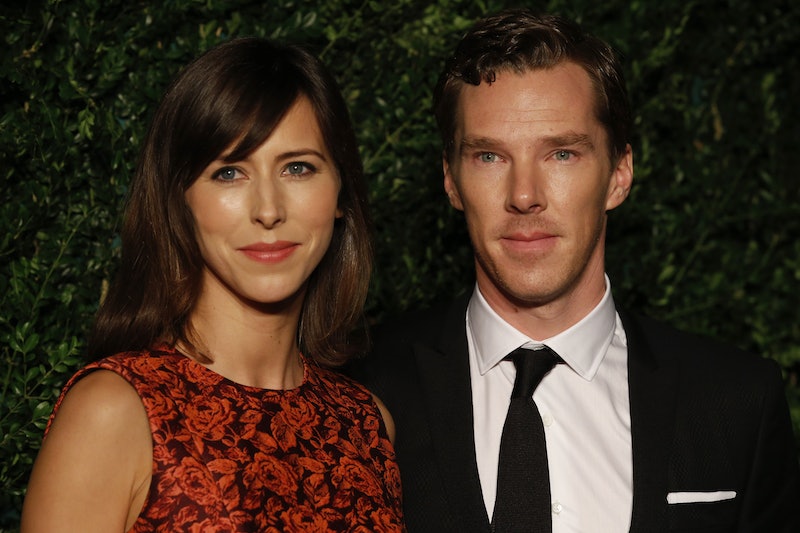 Sorry, Cumberbitches, but Benedict Cumberbatch is officially off the market. The Sherlock star Benedict Cumberbatch wed theater director Sophie Hunter on Valentine's Day after a three-month engagement, sending fans into a bit of a frenzy. Sorry, guys — we can't all marry Benedict Cumberbatch. And, unfortunately, we can't all be lucky enough to be pals with the Imitation Game actor, either. While we do know a few stars that made it to Cumberbatch's wedding — like his Imitation Game co-star Keira Knightley, his Sherlock co-star Martin Freeman, and Tom Hiddleston — the star-studded event included we don't yet know who was the star's Best Man. Though it was reported that actor Martin Freeman was supposed to fill the spot, the rumors haven't been confirmed — which means that it's still possible for Tom Hiddleston to have scored the honor.

Hiddleston and Cumberbatch have one of the most adorable friendships around, so it's not surprising that so many fans want Hiddleston to help Cumberbatch's dream wedding go off without a hitch. (Or, well, with a hitch.) We might not know for a while whether or not that's actually a reality — Cumberbatch and Hunter are notoriously private people, and getting any details at all about their wedding is almost impressive — but , for what it's worth, the Daily Mail did recently present an alternative clue that may suggest that perhaps the setting of the wedding (at the Mottistone Manor on the Isle of Wight in England) could be a hint that the Thor actor did, in fact, act as the Best Man.

As fans may know, both Hiddleston and Cumberbatch starred in War Horse, a drama about World War I service animal. It turns out that the real "war horse" died at Mottistone Manor, which the Daily Mail suggests could be a hint that Hiddleston got the title of Best Man.

Sure, it seems like a bit of a stretch — but we do know that Tom Hiddleston did show up to the wedding to support Cumberbatch. Whether Hiddleston hung out at the wedding ceremony as a guest or as a part of the wedding party is still unclear, but, whoever was crowned Cumberbatch's best man is certainly a lucky guy... and Hunter is definitely one lucky lady. Congrats to the happy couple!