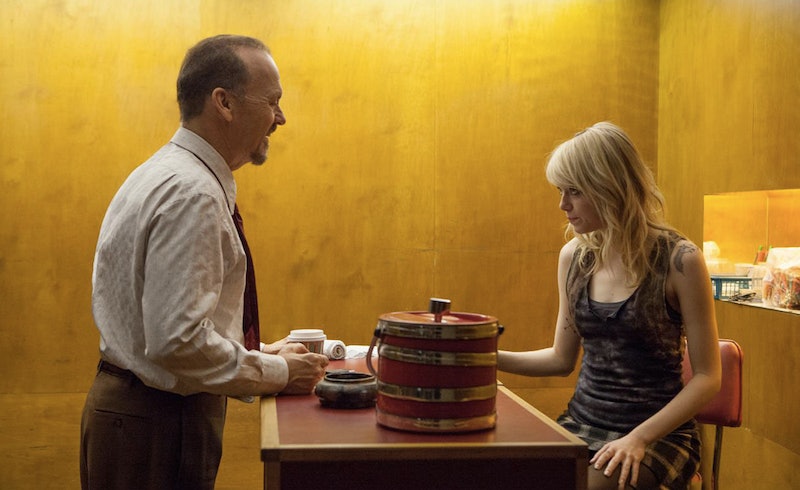 Trying to predict the Oscars is a tricky business. Oftentimes, categories are a virtual lock months before the presenters open those glossy envelopes — as is the case in the Supporting categories this year, where J.K. Simmons and Patricia Arquette are all but guaranteed to triumph for their roles in Whiplash and Boyhood, respectively. But when the categories aren't locks, then trying to stare into the crystal ball of the Academy can be like swimming through fog. Surprisingly, the 2015 Oscars Best Picture race is shaping up to be anyone's game this year, which means the inventive Michael Keaton dramedy Birdman has a shot at the 2015 Best Picture Oscar.

But there's a catch: Ever since Richard Linklater's 12-years-in-the-making film premiered at the Sundance Film Festival in January of 2014, Boyhood has been an early favorite for Best Picture. The audacity of taking twelve years to shoot a coming-of-age story took people's breath away, and by the time the movie opened in limited release in mid-July (and opened wide a month later), it was already the talk of the town. It landed at an impressive 98 percent on RottenTomatoes — the highest critical score of any of this year's Best Picture nominees, tied with Ava DuVernay's Selma. And CriticsTop10.com claims that Boyhood appeared on 536 year-end best-of lists in 2014 (a record), and was the top choice on 189 of them (also a record), including The New York Times, The Wall Street Journal, and The Washington Post. So how could any film hope to overcome those impressive credentials, much less one with a seemingly silly name like Birdman?

It's Not The Academy's Style

While Birdman was directed by Alejandro G. Iñárritu, an Oscar nominee for 2006's Babel, the film itself is not your typical Academy fare. It's dark and cynical — two adjectives the older-skewing voting body haven't exactly embraced in the past. It finds Keaton, someone who has been ignored by the Academy for his entire 40-year career, playing a washed-up has-been most famous for having played a superhero. It skewers industry professionals like vain actors, blustery producers, and holier-than-thou critics, which doesn't bode so well for the Academy, who holds all of Birdman's targets so dear, to turn over a new leaf and hand over an Oscar.

But there may be a silver lining in all of this.

But It Was Really Successful

First of all, Birdman's critical success doesn't hurt. It also out-grossed Boyhood by $11.5 million, which means it's higher in the public consciousness. (Not that the Academy necessarily cares what's popular, but money never hurts a film's chances.) It is tied with The Grand Budapest Hotel for the most nominations of the year, at nine. (Boyhood only has six.) More importantly, with three nods for stars Michael Keaton, Edward Norton, and Emma Stone, it has the most acting nominations for one film in this year's race — and actors are the largest voting branch in the Academy.

And It's Winning All Kinds Of Awards

The safest bet for Best Picture is often the slew of awards that come before the Oscars. Boyhood was on a roll for a while, winning the top prizes from the Golden Globes and the Critics' Choice Awards. But then came the Guild awards (the Producers Guild, the Directors Guild, the Screen Actors Guild, and the Writers Guild), and Birdman pulled off a surprise near-sweep, claiming the Best Ensemble prize from SAG, the Best Director prize for Iñárritu from the DGA, and the Best Picture prize from the PGA. The only Guild award Birdman didn't win was from the WGA — and that's only because it was deemed ineligible to compete because the script was not completed under WGA guidelines. (Don't worry, John Ridley was also deemed ineligible for his 12 Years A Slave script by the WGA last year, and he went on to win the Oscar for Adapted Screenplay and the film itself took home Best Picture.)

It's Also Winning The Right Awards

The reason Birdman's dominance with the Guilds is important is because, unlike with the Globes or the Critics' Choice, there is overlap in the voting bodies between the Guilds and the Academy — which means a lot of the same people will be casting ballots for both ceremonies. So while foreign journalists and film reviewers both loved Boyhood, industry professionals apparently have a preference for Birdman. And that bodes extremely well for Iñárritu's film. The Producers Guild in particular has been a reliable bellwether for the Oscars, having correctly predicted the eventual Best Picture winner the past seven years in a row and 18 of the 25 years the Guild has been handing out awards. By that indicator, Birdman has a come-from-behind victory locked and loaded for February 22.

There Are Still Some Roadblocks

There are a couple of caveats, of course. Just one night after Birdman triumphed at the DGA Awards, completing its Guild trifecta, it lost the crucial BAFTA prize to Boyhood . The British Academy Film Awards are considered the English Oscars, and they're almost as good an indicator as the PGA, having crowned the eventual Best Picture winner the past six years in a row. (While the PGA correctly gave its prize to No Country For Old Men in 2008, BAFTA gave its to Atonement.) So two voting bodies both infamous for predicting the Academy's future selected separate films this year which pretty much screws my selection method for my yearly Oscar pool.

If Birdman Loses, It's In Good Company

Another thing to consider: If Birdman doesn't win on Oscar night, it wouldn't be the first film to win the PGA/DGA/SAG triple-crown and then fail to take home Best Picture. The same thing happened in 1996 to Apollo 13, which lost the trophy to Mel Gibson's Braveheart in spite of apparently massive Guild support. There was, however, one indication going into Oscar night that Apollo 13 was in trouble: the Academy had delivered the film a crippling snub by not nominating its DGA-winning director, Ron Howard. And there's similar indication in 2015 that Birdman is facing an Apollo 13-sized upset.

Birdman's director earned a nomination, but the film did receive a snub in one crucial category: Best Film Editing. Since 1981, not a single Best Picture winner has won without a Film Editing nomination — and about two-thirds of those winners have also won that award. A snub in this category is definitely reason to worry.

The only question that remains is which whether the acting nominations & Guild awards dominance or its BAFTA and Editing category losses will weigh more heavily on Birdman's chances. Either way, it will walk away with one huge honor: being the film that kept everyone guessing right up until Oscar night.