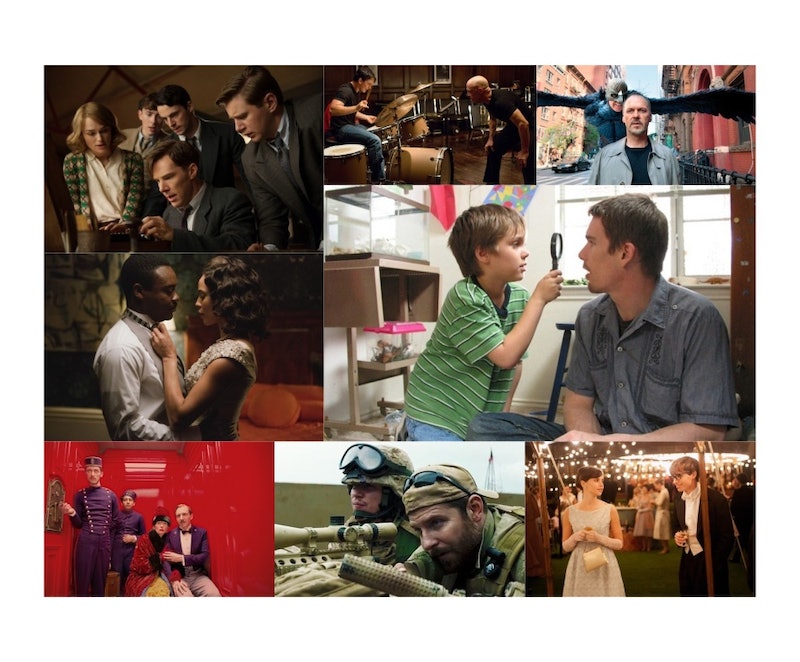 By the time the Oscars roll around, we're usually all complaining about how predictable the awards season has been. Typically, one film dominates the conversation, raking in awards on an unstoppable trajectory towards the Best Picture prize. This year, then, is a refreshing change of pace. Going into the 87th Annual Academy Awards, the race is wide open, with several films' odds waxing and waning in turn. The 2015 Oscar nominees for Best Film are American Sniper, Birdman, Boyhood, The Grand Budapest Hotel, The Imitation Game, Selma, The Theory Of Everything, and Whiplash.

Last year was a slight departure from this model, with both Gravity and American Hustle giving 12 Years A Slave a run for its money (with Gravity's Alfonso Cuarón even nabbing the Best Director trophy), but it turned out, neither of them could supplant the weight of that historical epic. Richard Linklater's experimental Boyhood is the closest thing we have to a frontrunner this year, managing to sustain its buzz since its premiere way back in July, and having just taken home Best Picture — Drama, Best Director for Linklater, and Best Supporting Actress for Patricia Arquette at last week's Golden Globes. But it's far from the only heavyweight in the competition.

The biggest question surrounding the Best Picture nominations wasn't, "Who will make the cut?" but, "How many will make the cut?" In 2009, the Academy widened the field from five nominees to 10, so they could recognize a larger range of films, from big blockbusters (Inception) to tiny indies (Winter's Bone) that the voting body would usually ignore. But just two years later, they changed the rules again, stating that there was no longer a mandatory number of nominees. In theory, there can be anywhere between five and 10 films nominated in the category, depending on how many earn at least 5 percent of first place votes in the Academy's preferential voting system. Weirdly, there have been nine Best Picture nominees all three years since that rule was instated, but there was nothing guaranteeing that would hold true for the films of 2014. As it turns out, only eight films made the cut.

And the nominees are:

The Academy loved Clint Eastwood's war drama more than anyone expected them to, landing Bradley Cooper a Best Actor nod in a very crowded film (at the expense of frontrunner David Oyelowo for Selma and dark horse Jake Gyllenhaal for Nightcrawler), as well as Adapted Screenplay, Film Editing, Sound Editing, and Sound Mixing... though they didn't quite love it enough to give Eastwood himself recognition in the Directing category (which, at 84, would have made him the oldest person ever given that honor).

Odds of winning: Low. Most prognosticators were unsure if it would even sneak into the field, so it should consider its nomination its award.

No surprise to anyone that Alejandro G. Iñárritu's experimental dramedy was much loved by the Academy, who gave it nine nominations total, including Picture, Director, and three Acting nods for stars Michael Keaton, Edward Norton, and Emma Stone. (This is the second time Iñárritu has been nominated for Best Director, after 2006's Babel.) That ties it with Grand Budapest for the highest number of nominations.

Odds of winning: Lower than before the announcement, oddly. Birdman was one of the favorites for the top prize, and despite its high number of noms, its chances were definitively hurt this morning in one surprising way: a snub for Film Editing. Since 1981, not a single film has won Best Picture without a nomination in that category, and about two-thirds of films that have won Best Picture in that same time period have also won the Editing award.

Richard Linklater's 12-years-in-the-making coming-of-age story may have only gotten a total of six nominations, but it stuck the landing where it counted. The picture secured nods in all the expected categories: Picture, Director, Supporting Actor, Supporting Actress, Original Screenplay, and Film Editing.

Odds of winning: Very high. Boyhood has managed to sustain its buzz since its July premiere, and it shows no sign of flagging. And that Film Editing nomination gives it the edge over its fiercest competitor, Birdman.

Wes Anderson's latest comedy seemed to have all but faded from awards consideration in the face of several late-in-the-season heavyweights, but its triumph in the Best Picture — Musical or Comedy category at the Golden Globes signaled an uptick in voter appreciation... a trend that the Academy continued, giving the film nine nominations — tying it with Birdman for most of the year.

Odds of winning: Good. Its victory over Birdman at the Globes definitely ranks it as a major contender, and it does have that coveted Editing nod. But actors are the largest voting block of the Academy, and Budapest didn't land a single nomination in any of the four Acting categories (not even for leading man Ralph Fiennes, who some considered a possible contender), which certainly doesn't help matters.

With eight nominations, this biopic of Alan Turing was right behind Birdman and Grand Budapest in terms of total recognition — and where it has one-up on the latter is in the acting fields, where stars Benedict Cumberbatch and Keira Knightley were both nominated. Director Morten Tyldum got a first-time nod, and the film was recognized in the coveted Editing category.

Chances of winning: Great. Could Tyldum's film be this year's King's Speech? As in, a solid if by-the-numbers biopic of a famous British figure with respected performances that steals the top prize from other worthy (if more experimental) fare? In 2010, it was David Fincher's The Social Network that fell to the movie about a stuttering king. Could Birdman and Boyhood fall victim to The Imitation Game in the same way? It's possible.

I expect that most people had given up hope of hearing this film announced when it came time for the Best Picture race, since Selma had been snubbed in every category except Original Song, where Common and John Legend's "Glory" was recognized. Counter to most people's hopes, Ava DuVernay did not make history by being the first black woman nominated for Best Director, star David Oyelowo lost out in a competitive Best Actor category, and it failed to gain entry into the Original Screenplay race or any of the technical categories. That almost makes Selma's nomination for Best Picture worse — it feels more like the Academy tossed it a nomination so it could be the token "minority film" in the race, rather than because they felt it actually deserved the recognition on its own merits.

Odds of winning: Slim to none.

The Theory Of Everything

This film based on the memoir by Stephen Hawking's wife Jane earned five nods from the Academy, and has the honor of being the only film this year recognized in both the Leading Actor races — for stars Eddie Redmayne, who won the Golden Globe for Best Actor in a Drama, and Felicity Jones.

Odds of winning: Very low. If only one biopic of an eccentric British genius is going to win, it will be The Imitation Game.

This little-film-that-could about an aspiring jazz drummer and his maniacal instructor landed five nominations, including one for its screenplay — which was far from a sure thing after the Academy decided it should compete in the Adapted category instead of the Original, despite the filmmakers entering it in the latter, because the film is actually an adaptation of a short film by the same name that the director, Damien Chazelle, made in 2013. BUT, that short film itself was adapted from the feature-length screenplay that Chazelle had already written, and was only made to secure funding for the feature-length version he had always envisioned. Confusing.

Odds of winning: Modest. It did land a nod in the Film Editing category alongside such heavyweights as Boyhood, Grand Budapest, and Imitation Game. But J.K. Simmons is all-but-guaranteed to take home the trophy for Supporting Actor, and — with so many deserving films this year — the Academy is likely to spread the wealth.

Opinion was split on this true crime film about schizophrenic billionaire John du Pont and his obsession with Olympic wrestling brothers Mark & Dave Schultz... even within the Academy itself, it would seem. Despite star Steve Carell staving off fierce competition to remain in the Best Actor race and director Bennett Miller getting a nod in his category, the film itself was absent from the Best Picture roster. This marks the first time since the Picture category was expanded from five nominees in 2009 that a film whose director was recognized failed to earn a place in the Best Picture race.

Wow, the Academy really didn't like David Fincher's adaptation of Gillian Flynn's best-selling novel. Despite being considered by most as a frontrunner to be nominated in many categories, including Picture, Director, Adapted Screenplay, Film Editing, and Original Score, the thriller's sole nod was for Rosamund Pike in the Best Actress race. Of course, with $167 million in the bank, Gone Girl was the highest-grossing movie in serious contention for Best Picture this year, so go figure. (That's $108 million more than the highest-grossing movie that ended up landing a nom: The Grand Budapest Hotel, with $59 million.)

No film faded from grace so quickly this year as Angelina Jolie's World War II biopic. Highly anticipated before its release, Unbroken plummeted precipitously in awards consideration after a slew of mixed-to-negative reviews. We entered this season thinking the Academy might make history by nominating two female directors for the first time (Jolie and Selma's DuVernay). Instead, it's just business as usual, since neither of them ended up making the cut. (Unbroken's only nominations came for Cinematography, Sound Editing, and Sound Mixing.)

More like this
12 ’90s Movie References You Missed In 'Do Revenge'
By Radhika Menon
Paul Mescal, Man Of Mystery
By Samantha Leach and Heather Hazzan
What’s New On Netflix: Ana De Armas’ 'Blonde' & A Nick Kroll Special
By Arya Roshanian
These 25 International Horror Movies On Netflix Prove Fear Is A Universal Language
By Bustle Editors
Get Even More From Bustle — Sign Up For The Newsletter