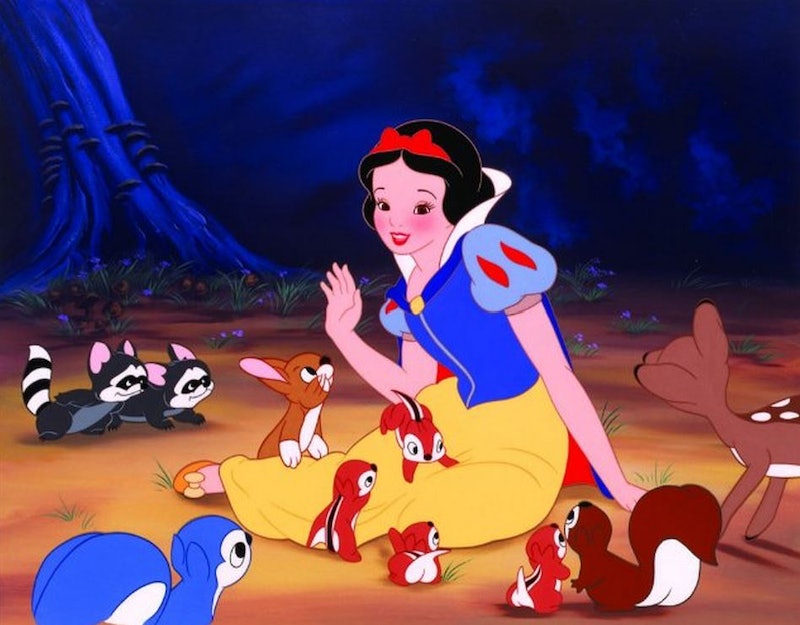 There have been a lot of different reactions since news broke that a measles outbreak started at Disneyland about a month ago — but this? This one is definitely the best one anyone could possibly come up with: Writing for McSweeney's, George Estreich penned a magnificent piece detailing the immunization status of various Magic Kingdom celebrities. You guys? It is genius. Genius, I tell you — and definitely worth the five to 10 minutes it will take you to read it. I promise.

In Estreich's vision, brief case studies are provided for a variety of classic Disney characters. Snow White, for example, was immunized as a child, but later developed “a suspicion of oppressive beauty standards and a distrust of big Pharma.” She also runs a blog, which earns over 70,000 unique views per week. Cinderella, meanwhile, made sure to get all of her children vaccinated after her stepmother refused to let her get her shots (her stepsisters all got them, though — even the one for HPV); she had to fight the palace tooth and nail on it, though, as they had somehow developed the belief that immunizations would turn the children into elves.

However, given that Estreich's piece focused solely on classic characters — the most recent one is Ariel, who first graced us with her presence in 1989 — I couldn't help but wonder where some of the more recent additions to the Disney pantheon might stand. I mean, some of the ones that have made their appearances within the last 10 to 15 years? Well, let's just say they might be somewhat... uh... questionable. Here's my take on it; head on over to McSweeney's to read the original post. No, seriously, you guys — go read it. It's brilliant and hilarious and absolutely wonderful. Happy Wednesday!

Jack Sparrow — his physician refuses to call him “captain” — is nothing short of a medical miracle. Given his recreational and professional activities, he should be a teaming mass of unspeakable horrors; furthermore, he has not been immunized against… well, anything (indeed, hypodermic needles wilt out of fear whenever they are brought in close proximity of the pirate's body). And yet, somehow, he remains as healthy as the proverbial horse. Learned women and men of science keep offering him great sums of money if only he would allow them to study his curious biology; however, he has developed a habit of taking the money and running, rather than holding up his end of the bargain.

Because Anna is terrible about staying on schedule, her children with Kristoff got vaccinated much, much later than they should have. Elsa was largely responsible for making sure it ultimately happened; when she realized they were running around unprotected, she summoned the palace doctor immediately (and when Queen Elsa summons you, you drop everything and go). When Anna's youngest got chicken pox, she decided they may as well all get it done in one go and made them all play and sleep together in the same room. The children were itchy, but came out of it relatively unscathed.

Anna and Elsa themselves, of course, had had their shots long ago; their parents may have made a mistake in wiping Anna's memory and forcing Elsa to hide her abilities, but generally they were mindful of the dangers of the world — and how to protect their daughters from them.

Due to the fact that they spent only a few minutes at a time in the human world, Mike Wazowski and his fellow Monstropolis residents had not been immunized against the majority of human illnesses. As a result, Boo's foray into their home brought untold numbers of contaminants into Monstropolis. Fully two-thirds of the city's population perished in the ensuing epidemic, but they are slowly rebuilding — and making sure they are armed with as much knowledge and science as possible to prevent a second such occurrence from happening.

After losing his wife and taking down the giant, the Baker had one more battle left to wage: The fight against his own tendencies toward becoming an unhealthily overprotective parent. With the help of Cinderella, Jack, and Red Riding Hood, though, he has grown able to keep his worrying in check and his parental efforts sensible (mostly). His son, who is now a strapping young lad of eight, has been vaccinated against all the usual suspects: Measles, mumps, and rubella; whooping cough; polio; and both types of hepatitis. The baker had a small breakdown when he learned that this year's influenza vaccine was only 50 percent effective, but has since recovered and allowed his son to return to school.

With the help of Baymax, Hiro Hamada has developed cures for every known virus and harmful bacteria in the world. Vaccines are no longer necessary in San Fransokyo, although rents remain astronomically high. You win some, you lose some.