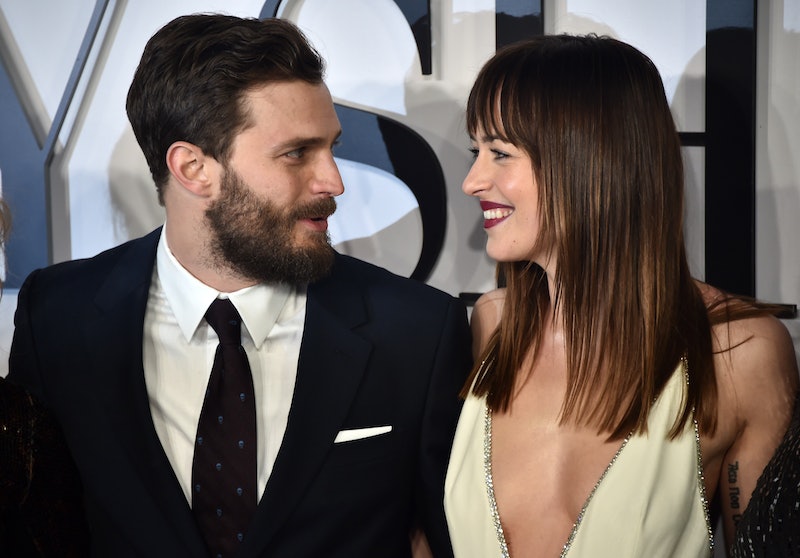 If Fifty Shades of Grey had you all hot and bothered this Valentine's Day, well, you're in luck — the rest of the trilogy is moving forward. According to Variety, the Fifty Shades of Grey sequels will be adapted into films,which means that we'll finally see a real conclusion to Christian and Anastasia's love story. Though rumors are already swirling that Sam Taylor-Johnson, the film's director, is likely not to return for the follow-up films based on book sequels Fifty Shades Darker and Fifty Shades Freed, both Jamie Dornan and Dakota Johnson are committed to their romantic roles. And it sounds like they don't need to be tortured to do so — the film's leads seem very happy to return for more Fifty Shades, meaning any rumors of a feud between the stars is just that: rumors.

Johnson has stated that she's thrilled to return for more, mostly because she loves how her character Ana develops not only over the course of the first film, but in the franchise as a whole. The actress told MTV News:

“I’m excited, I mean, she goes through such an arc in the first book and really explores herself and this whole other world... In the second book I think Ana becomes a woman, really. It’s a really interesting thing to play, to figure out the moment in which a person becomes comfortable with themselves.”

In Fifty Shades Darker, Ana definitely explores another side of herself — she's forced to contend with forces a bit more intense than her new sexual relationship with Christian, and while Fifty Shades of Grey is certainly a ride, the plot moves far more quickly in the sequel. Basically, Ana has way more to do in the second book than in the first, so it's no wonder that Johnson is excited for it.

Of course, getting to make out with Jamie Dornan isn't exactly the worst job in the world, either.

As for Dornan himself, he's also excited to dive into his character. He told MTV that he's stoked to explore the "different sides" of Christian, which we'll get to see a bit more of in the sequels. While the first book hints at Christian's past, the sequels introduce us to more characters that make up his world, including the older woman who took advantage of him as a teenager and his very first submissive. As the trilogy unfolds Christian's mysterious persona falls away, and it would be exciting for any actor to get to explore that.

Also, the audience gets to explore more of this:

Though the sequels do not yet have a release date, it's only a matter of time before we start hearing word of what's to come for the trilogy — and luckily, the actors are just as excited as all of their fans.