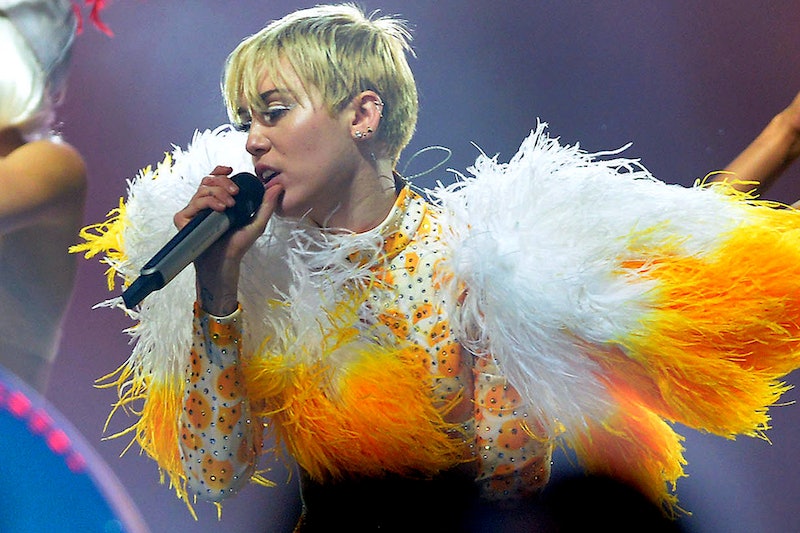 It would be inaccurate to say Miley Cyrus is having a moment, because we're always talking about her, but now her words on feminism have us talking again. In an interview with Australia's Sunday Style, Cyrus talked about dealing with snobby saleswomen on Rodeo Drive, but despite their attitude, that doesn't detract at all from how much Miley Cyrus loves women. In her words, "I f--king love women, trust me. They are something so beautiful... This kind of sounds cheesy, but girls just rule." Girls DO just rule, and it's not cheesy at all. In fact, the most important part of what the singer says focuses on the solidarity between women.

What's the basis for her lady love?

Because we have a sensitivity and passion you can't find in other people. It's in your demeanor as well... There are some good vibrations that come off women that men can't — oh, I'm going to get in trouble here, right? I always do — but maybe it is [simply that] women are born complicated.

"I'm going to get in trouble" is a valid concern. It definitely sounds like Cyrus thinks she's gonna "get in trouble" with dudes for insinuating that women have something exclusive that men don't — special bonds of friendship, and man-splainers can't stand when they are excluded from something. Forget you not about the "man-splaining" that's all the rage right now. Portlandia made fun of it in this searing sketch and then there's the recent Parks and Recreation episode where Leslie Knope so definitively sums it up saying, "Men's rights is nothing."

But Cyrus is right. There's something special about female relationships and bonds. Besides a different kind of support from your girlfriends, there's also often that unspoken solidarity to support each other to survive the patriarchy. (I don't care if THIS sounds cheesy, because it's true.)

Cyrus also has a positive outlook on women's progress: "The world is in the prime of its feminine energy... I think there's been a real twist [and] women are starting to feel that." Even though I may disagree when she went on to say that "women are more free than we've ever been," due in large part to the constant and exhausting fight for reproductive rights, I do have to endorse her feelings that women are becoming more fearless.

I especially appreciate the fact that more and more nuances of female friendships are being explored in TV shows that are smashing the Bechdel Test: Abbi and Ilana on Broad City are one of the best. Taylor Swift is bff-ing so many famous ladies, like Karlie Kloss, and it's the kind of bond that's important not only in the cutthroat entertainment world that drags on women constantly, but for everyone. I'll say it again: I agree with Miley, and you should NEVER underestimate the value of your girlfriends.