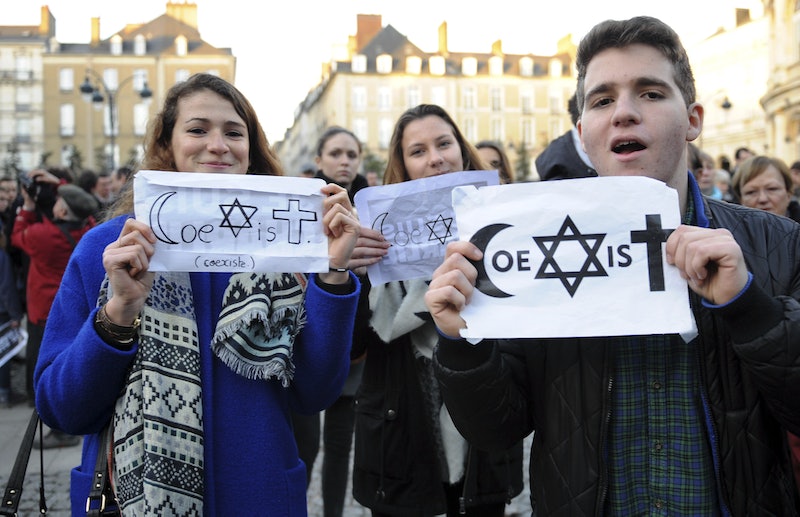 It seems that people are taking new tacks on combating terrorism and hate crimes, as previous strategies have not prevented attacks in Europe, the Middle East, or the U.S. Ordinary citizens are coming together to take down terrorism in their own way. They're not framing it as a "war on terror" — rather, they are waging peace. As the number of nations struggling with terrorism and extremism only increases, British activists held a "peace pilgrimage" in London on Thursday to advocate for unity among people of all faiths.

More than 100 Muslims, Christians, and Jews marched across London for hours, bearing signs encouraging peaceful coexistence between people of all religions. Marchers walked through three major religious centers: from the Regents Park Mosque to the Central Synagogue in Great Portland Street to Westminster Abbey. After hitting these three landmark places of worship — pausing to take a moment of reflection at each, led by respective religious leaders — marchers continued to more political destinations. The pilgrimage stopped at London's Parliament and concluded at St. Thomas' Hospital, taking a grand total of approximately five hours.

The march was organized by Coexist, an international humanitarian foundation that works to bring people together across various types of cultural boundaries (you might have seen their bumper stickers). According to the organization, the event was officially titled "The Coexist Pilgrimage: People of Faith Walk as People of Peace."

Organizers intended the pilgrimage to bring about a feeling of peace and goodwill towards citizens' fellow men (and women). According to Coexist, religious leaders held the march "to affirm a shared commitment to freedom, equality, democracy and respect for life." They marked their commitment with the two final stops on their pilgrimage: They paused at Parliament "to show a united love of democracy," and finished their tour at St. Thomas' Hospital "to emphasize shared respect for life."

There couldn't be a more appropriate time for an event like this. We've been saturated with bad news this winter, starting with the hostage situation in Sydney. ISIS has been waging a continued and increasingly brutal attack in the Middle East. This group is not only terrorizing masses of citizens in Iraq, Syria, Libya, and elsewhere, but they have recently turned their attention to executing Western reporters and social workers — perhaps in an effort to garner more publicity. Meanwhile, Islamic extremists ravaged Paris in January in a series of fatal hostage situations, and a Danish gunman is suspected to have been imitating those extremists when he opened fire on a free speech debate and a Copenhagen synagogue. Anti-Semitism, along with anti-Muslim sentiment, runs rampant across Europe.

Some of the most recent victims of religious extremism and violence are three young Muslim-American college students killed in their home this month. Though suspect Craig Hicks has been indicted on murder charges, the killing is not yet officially a hate crime. It sometimes seems like hatred is the rule and magnanimity the exception.

But this peace pilgrimage, albeit pretty small, is a marker of something positive coming out of all this violence. Coming just after President Obama harshly condemned terrorism at the Global Security Summit, the peace pilgrimage speaks to a population — not a national population, but a world population — that is ready for some kind of positive change. While Obama's rhetoric is not exactly peaceful — he calls for us to "destroy" and "degrade" ISIS — a message of coexistence is one that has begun to reverberate around the world. In the face of all this senseless violence that pits individuals against each other based on something as arbitrary as religion, we need a communal effort to show terrorists (and would-be terrorists) that peace is better.