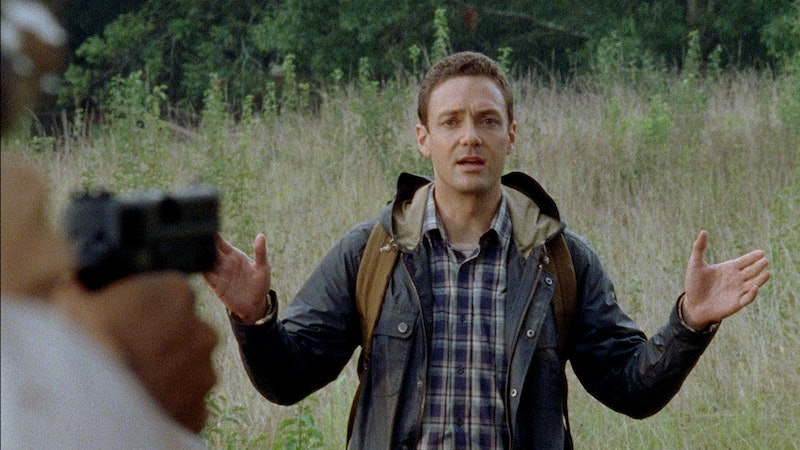 We've got fresh meat on the set of The Walking Dead with Aaron appearing at the end of the Feb. 15 episode, "Them." With Ross Marquand joining the squad, does this mean Aaron's partner Eric will be on The Walking Dead ? I would have been supremely upset if the AMC show introduced the first gay man of the series and then neglected to include his boyfriend — another prominent character in the comics. But rejoice, TWD comic fans! The show seems to be following the comics by including Eric.

The Spoiling Dead Fans posted on its Facebook page that according to an unnamed source, not only will Eric be on The Walking Dead, but he will be in Season 5, Episode 11 "The Distance," airing on Feb. 22. Woah — The Walking Dead is going to give us instant gratification? That's something we're not used to. But Eric and Aaron worked together as recruiters for the Alexandria Safe-Zone in the comics and teamed up while searching for new people they could trust to ensure each other's safety. It only makes sense that with Aaron finding the group on the show, Eric should soon follow.

According to The Spoiling Dead Fans' source, Jordan Woods-Robinson will portray Eric. And like with other newbie Marquand's amazing impersonation skills, Woods-Robinson boasts an interesting skill set — he's been a Blue Man in Blue Man Group. Someone please tell me that Tobias Fünke is a Walking Dead fan?!

With so much chatter about whether or not Aaron would be joining the cast, it's been a bit surprising that Eric has gotten so little attention. Sure, Aaron is the bigger character in the comics, but Eric is important to Aaron and the Alexandria Safe-Zone storyline.

Now, just because you join The Walking Dead doesn't mean you'll get a lot of screen time (*cough* Rosita *cough*). Aaron is most likely to be seen more than Eric, but Rick and his crew will need the pair of them to explain a lot about the Alexandria Safe-Zone. And of course, Aaron and Eric will need to earn their trust. Shockingly, Rick isn't always so willing to trust people so easily nowadays. I wonder why that is...

It doesn't help that Aaron says things like, "You can trust me" in the preview for "The Distance." I mean, I don't know what else I would say in his position, but if his role is recruiter, he's going to need to do a bit better than that to woo Rick, Daryl, Glenn, and gang. (Also note, Eric is nowhere to be seen in the promo.)But, I spoke too soon, because Aaron is not a rookie. In this preview scene below, we see Aaron talking to Rick in a direct manner about the fact that they won't believe whatever he says anyway.

Ah, yes. Rick will have to respect Aaron, even if he doesn't trust him (or Eric) right now. All of that needs to change if the group is going to head to Alexandria Safe-Zone — and at this point, I can't imagine The Walking Dead headed in any other direction but north.