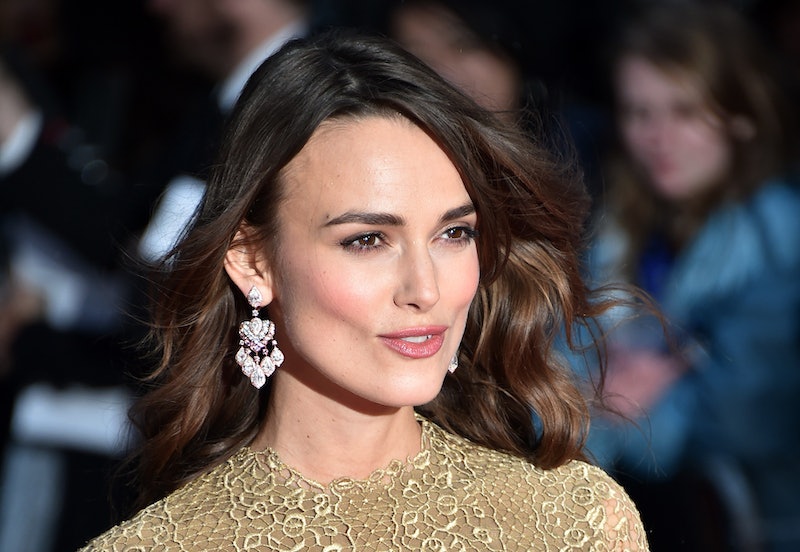 To the delight of her fans everywhere, Keira Knightley scored her second Oscar nomination for her stellar performance in The Imitation Game (she was last nominated back in 2005 in the Best Actress category for her turn as the iconic Elizabeth Bennet in Pride and Prejudice — and at 20 years old, she was actually the fifth youngest nominee in the category). Critics pretty much across the board praised her Imitation Game performance (praise that was well-deserved, considering that I almost cried during her last scene with Benedict Cumberbatch and I'm practically a robot), but it's not as if she's generally been considered a serious a contender for the Best Supporting Actress award this year or in 2005. After all, Patricia Arquette is widely believed to have the whole thing on lockdown, and even if (by some strange twist of fate) Arquette didn't end up winning, there's still Meryl Streep, Laura Dern, and Emma Stone for Knightley to contend with. So, excellent performance or no, it's not looking like 2015 is Knightley's year to win an Oscar.

After all, she's someone for whom there's generally a lot of smoke — but not always a fire. Over the past decade, she's had a lot of buzz-worthy roles (think Atonement and A Dangerous Method), but she's actually picked up fewer nominations, and even fewer awards than you may think. You hear the name "Keira Knightley" and you think things like "period films" "serious actress" and "biopic" — usually all topics that are thought to be awards bait, though she generally hasn't historically delivered on that front. A cynic might even say she's doomed to a lifetime to Leonardo diCaprio syndrome (which truly is a tragedy — NOT), but I think she'll pull through and win — someday.

And hey, that day may be sooner than we think: What with her recent career shakeups like Laggies (she stars as an almost disturbingly-relatable millennial), her first-ever singing role in Begin Again; not to mention the Oscar nomination she scored for The Imitation Game — and I think we're seeing the beginning of Keira Knightley 2.0. I think Knightley's on the rise — which, in my calculations, means we're not going to have to wait another 10 years until she gets another Oscar nod, because she's going to be getting one soon.

Knightley may have once been someone to scorn and tease for the occasional overwrought (and/or underwrought) performance, but she's left those days behind her — and you'd better watch out, because she's coming to get your awards.