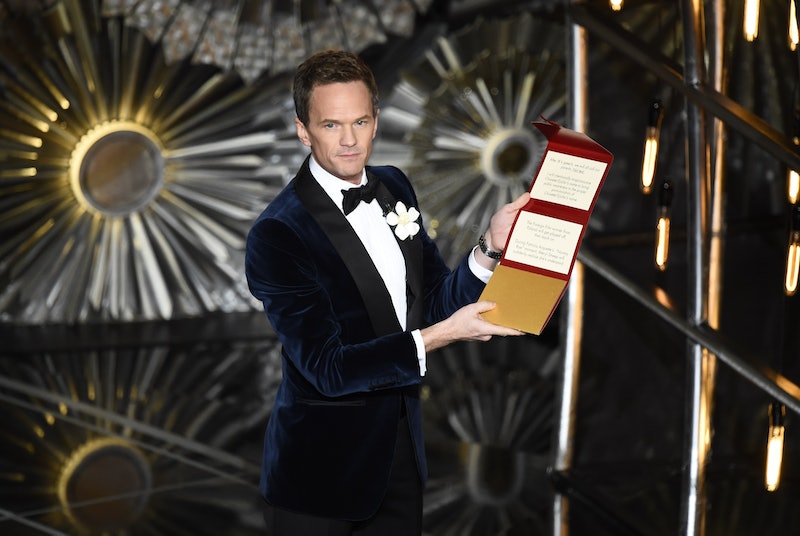 Tonight, millions of people around the country tuned in to the 87th Annual Academy Awards, broadcast live from the Dolby Theatre in Los Angeles, hosted by star of stage and screen Neil Patrick Harris. Some of the people watching were anxiously awaiting the results of the Academy's votes. Others were watching for the fashion as celebrities glided down the red carpet. And still others were just hoping to hear famous people say something funny when their teleprompter inevitably broke. That's why we need to remember the best quotes from the 2015 Oscars.

There are no shortage of famous quotes from the 86 Oscar ceremonies that have proceeded Sunday's event: some funny, some touching, some embarrassing. Without a doubt the most memorable quote from last year was when presenter John Travolta so thoroughly flubbed Broadway actress Idina Menzel's name. The actor's gaffe launched a frenzy of parodies and memes, becoming an overnight internet sensation. (On Slate, you can even "Travoltify" your name.)

But flubs aren't the only Oscar quotes we remember years later. We also remember when stars are refreshingly self-deprecating, like when Meryl Streep won her third statuette in 2012 for The Iron Lady: "When they called my name, I had this feeling I could hear half of America going, 'Oh no. Come on... Her, again?'" We remember their off-the-cuff improvisations, like David Niven's quip after a streaker ran across the stage at the 1974 ceremony: "The only laugh that man will ever get in his life is by stripping off and showing his shortcomings." And we remember the stars' hilariously over-the-top reactions to winning, like Sally Field's oft-misquoted acceptance speech for 1984's Places In The Heart: "I can't deny the fact that you like me — right now, you like me!"

Only time will tell if any of the following quotes will join those in the pantheon of most memorable Oscar moments. But while we await history's decision, here are the best jokes, the worst flubs, and the most moving thank-you's of the 2015 Academy Awards:

Approximately two seconds into his opening monologue, host NPH established the self-aware tone of the evening with this jab at the fact that 2015 is the first year since 1998 in which all 20 acting nominees are white.

"Tonight is not just about the eight picture nominees. There are 60 films the Academy has recognized. Tonight is for the composers and the computer animators, the set designers and the screenwriters, the sound mixers and the makeup masters. But tonight is also for the people who love these movies, who bought a ticket, who took a ride, who got lost in the stories that inspire us, the stories that motivate us. That remind us to be brave in the face of danger, to chase impossible dreams, and to stand up for our rights. Tonight, on this stage, we have come together to celebrate, and hopefully to fall in love, with moving pictures all over again. Okay, maybe not Smurfs 2." — Neil Patrick Harris

NPH wrapped up his monologue with a touching moment. Celebrating the many moving parts it takes to make a moving picture... including those of us who participate by watching them. But he veers away from the schmaltz pretty quickly, poking fun at himself for his role in the much-derided animated comedy.

"Everybody, call you mom, call your dad. If you're lucky enough to have a parent alive on this planet, call 'em. Don't email, don't text them. Call them on the phone, tell them you love them, thank them, and listen to them for as long as they want to talk to you." — J.K. Simmons

While accepting his Oscar for his supporting role in Whiplash, Simmons delivered a moving tribute to the supportive parents all around the world, encouraging young people to put down their "jean screens" and actually call their folks.

"American Sniper with Bradley Cooper, is the most prolific sniper in history, with over 160 confirmed kills... Or, as Harvey Weinstein calls it, a slow morning." — Neil Patrick Harris

NPH is referencing the Miramax über-producer, who is famously for ruthlessly campaigning his films all the way to Oscar gold — as in 1999, when he pushed Shakespeare In Love to victory over assumed frontrunner Saving Private Ryan.

"And now, an actor who's as appealing playing a male stripper as he is playing a wrestler in a onesie. He's the real deal, pants down. Hands down. Did I say pants? I meant pants." — Neil Patrick Harris

The adorable host gets as flustered around Magic Mike and Foxcatcher star Channing Tatum as the rest of us would, apparently.

If anyone's name was going to get flubbed this year, it was the Oscar-nominated star of 12 Years A Slave. At least NPH quickly acknowledged his error and corrected it smoothly. (And he did nail Selma star David Oyelowo's name later in the broadcast.)

"I'm particularly happy because this now means I can get a free donut at my local bakery, the Pump Street Bakery. They do fantastic donuts. Should we stick to the script?" — Mat Kirkby

Winner Mat Kirkby tries going off-script in his acceptance speech for his Live Action Short Film The Phone Call... and then quickly changes his mind for the better.

"Acting is a noble profession." — Neil Patrick Harris, in his tighty whities

Parodying a scene from Birdman, NPH's robe got caught in his dressing room door and he had to go out on stage in nothing but his skivvies.

"They are four women, plus, in accordance with California State Law, Meryl Streep." — Jared Leto

Last year's Supporting Actor ;winner for Dallas Buyers Club introduced the Supporting Actress category by saying what we were al thinking. (Streep's nomination for Into The Woods was her record-breaking 19th.)

The host poked fun at the ridiculous names of the popular Hunger Games franchise. (Speaking of The Hunger Games... Where was Jennifer Lawrence tonight?)

The star of Into The Woods quipped about her own small stature while presenting this category with the similarly short Kevin Hart.

"If you're at an Oscar party with the guys who made The Lego Movie, now's the time to start distracting them." — Neil Patrick Harris

"The subject of CitizenFour, Edward Snowden, could not be here for some treason." — Neil Patrick Harris

"Benedict Cumberbatch. It's not only the most awesome name in show business... It's also the sound you get when you ask John Travolta to pronounce 'Ben Affleck.'" — Neil Patrick Harris

NPH introduced the star of The Imitation Game with this reference to John Travolta's famous gaffe.

The singer accept the award for his Best Original Song "Glory" with this eloquent speech about civil rights, and the Martin Luther King, Jr. biopic's parallels to today's struggles.

"When I was 16 years old, I tried to kill myself because I felt weird and I felt different and I felt like I did not belong. And now I'm standing here and so I would like for this moment to be for that kid out there who feels like she's weird or she's different or she doesn't fit in anywhere. Yes you do. I promise you do. You do. Stay weird, stay different. And when it's your turn standing on this stage, please pass the same message on to the next person who comes along." — Graham Moore

The screenwriter of the Alan Turing biopic The Imitation Game took the opportunity of his Oscar victory to give this heartfelt confession and to deliver these stirring words of encouragement to outsiders everywhere.