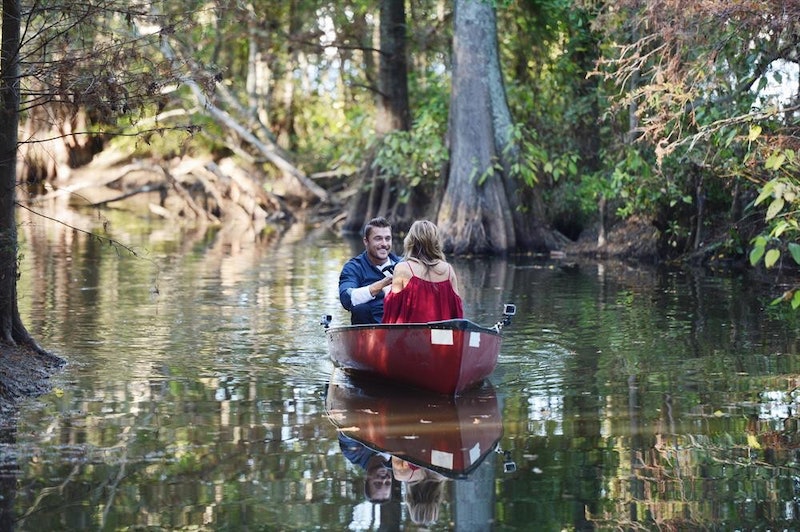 The most awkward episode of one of the most awkward shows on television has arrived: it's time for The Bachelor Fantasy Suites, y'all! I live for the last few weeks of every Bachelor season when everything has become so serious and as an audience member, you're so invested in figuring out who's the perfect match that you totally forget that things like asking a parent for their marital blessing while still actively dating three other women is a very normal step in a relationship. Fantasy Suites are practically an American institution at this point: The throw pillows are arranged on the mattress with care; a P.A. with an assortment of condoms, soon will be there (or not, if Courtney Robertson's book is to be believed). The assumption of sex in the Fantasy Suite is a lot like the proposal this whole thing is supposed to end in: It feels weird and wrong, but 19 seasons of this show have led us to believe this is all normal. But head's up: It's totally fine to not have sex in the Fantasy Suite.

This week, Becca (who's yet to tell Chris she's a virgin) will weigh her options regarding the Fantasy Suite and if I have anything to say about it, Becca shouldn't worry about the pressure. You don't have to have to get down just because ABC bought a hotel room, girl. It's OK to not have sex in the Fantasy Suite because, duh, it's OK to not have sex anytime you don't want to; or even times when you do want to but feel like you shouldn't; or like, if you're really full, or really tired, or at all hungry. There are tons of reasons not to have sex, but when you've been in a semi-mandatory polyamorous relationship for the last two months with the knowledge that it was all leading to one day when you would be given the chance to have ABC-approved sex with your one-thirds boyfriend, those reasons could reasonably get a little muddied. This man is the reason you risked your dignity for on national television and now he likes you, and you like him, and there are plenty of reasons to have sex with him once you read the note from Chris Harrison that says you're contractually allowed to.

But not everyone is down with this, and it's also totally reasonable not to get down because...

Everyone You Know Will Watch This

No one will be able to resist watching. I barely knew a contestant from college in a recent season and I felt like I could practically smell Chris Harrison's aftershave in every episode she was on. We're living in an era where everyone at least tangentially knows someone who is currently participating in some sort of reality show, but that doesn't make it any less exciting when it happens. So if you're someone who doesn't like your parents, a girl from your 10th grade Chemistry class, and your Ethics professor explicitly knowing that you're having sex with your new boyfriend (sidebar: they'll also know exactly who else he's having sex with), then this would be a good time to hold off. Because everyone you've ever know, ever, is watching this.

You've Only Spent Five to Ten Solo Hours with This Fella

It's fine to have sex at whichever point you're ready to in a relationship. But it's also a bit of emotional Bachelor trickery to make these people think they've been dating the Bachelor(ette) for two months, when really they've been on a maximum of three solo dates with them. And the Fantasy Suite is the first time that any of those dates will not be televised. So, go on and do whatever you want to do in there, but know that talking, snuggling, and/or testing out your Chris Harrison impressions on one another are also solid options for your first moments alone.

I seriously don't know how these people do it. They fly into another country in a different time zone for three days; any time that isn't spent on a date is spent thinking about how somebody else is on a date with the person they're in love with; and then, they go on a date that usually starts in the morning and goes well into the night, where they're then invited to go sex it up in the Fantasy Suite for eight more hours of not sleeping. There's also usually a lot of sweating involved during the "exploring the country" part of the date. If you're too tired to put that "fantasy" in "suite" after a 20-hour day of filming, that's fine. And that stands for the Bachelor(ette) too, who at any given time, could be going on their third consecutive Fantasy Suite.

Do Whatever You Want — EVERYTHING IS ALREADY CRAZY

Fans and contestants of The Bachelor are experts on the "rules" of this show. That's why everyone on Chris' season freaked out when Harrison was all, "There are no rules!" The Bachelor was built on rules, spoken and unspoken, and that's why it seems like you need to have sex in the Fantasy Suite, because that's what it's there for (#unspokenrule). But here's the thing: the premise of this show is already nuts! So, there's really nothing you could do that would be weirder than what ABC has already done by airing 19 seasons of it. Go into that Fantasy Suite, saber a bottle of champagne and declare it the Winner's Suite, because today is your day, whether you're ready to have sex with a virtual stranger you think you're in love with or not!

More like this
Becca Tilley Confirmed Her & Hayley Kiyoko’s 4-Year Romance With A Heartfelt Note
By Brad Witter
JoJo Fletcher & Jordan Rodgers Got Married In A “Playful & Fun” Wedding
By Grace Wehniainen
I'm 42 & I've Never Had Sex. Is It Too Late?
By Sophia Benoit
All The Clues Gillian & Edgar Are Still Friends After 'Temptation Island'
By Brad Witter
Get Even More From Bustle — Sign Up For The Newsletter