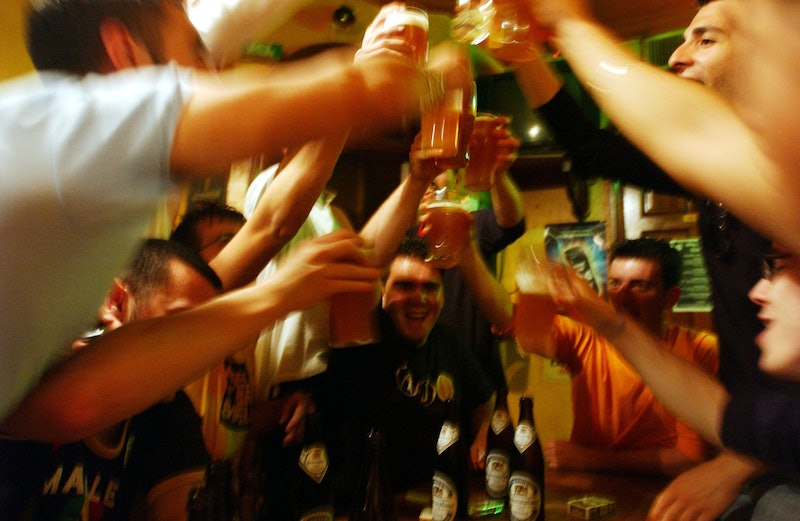 There's no shortage of alcohol-drinkin' people in America. There is also no shortage of pop songs about drinking, and no dearth of music videos for those songs about drinking. And these music videos all make alcohol look pretty good — the only exception I can think of is "Blame It" by Jamie Foxx ft. T-Pain, which isn't even that negative. For perspective: when I Googled "how many videos are on YouTube are music videos" for this article, one of the top results was a YouTube video for the song "How Many Drinks" by Miguel. Since there are approximately a ton of music videos on YouTube and a whole lot of them are about how great alcohol is, I'd say that's a fair representation of how alcohol is presented on the site. So, it might not shock you to hear that a new study has found that videos on YouTube tend to glorify alcohol use and show drinkers as cool, attractive, and funny.

For the study, researchers at Brown University and the University of Pittsburgh searched YouTube for videos containing the words "drunk," "hammered," "tipsy," "buzzed," and "trashed" and examined the 70 most popular results. They found that the videos contained more men than women and tended to show people who were attractive, funny, and most importantly, having fun. According to the study — which is called "Portrayal of Alcohol Intoxication on YouTube" and will be published in the journal Alcoholism: Clinical and Experimental Research in March — most of the videos focused on hard liquor. This came as a surprise to the researchers, since most of the videos were uploaded from the U.S., where most people drink beer more than liquor.

If none of this information sounds like news to you yet, here's what worries the researchers: Even though 86 percent of the videos examined show active intoxication, only 7 percent even mention the possible negative effects of alcohol. As you probably know, these effects are wide-ranging and can be damaging in the short term or the long run — illness, hangovers, alcohol poisoning, brain damage, addiction, and more, unfortunately. Here's what the researchers say about this finding in the study:

Internet videos depicting alcohol intoxication are heavily viewed. Nearly half of these videos involve a brand-name reference. While these videos commonly juxtapose alcohol intoxication with characteristics such as humor and attractiveness, they infrequently depict negative clinical outcomes. The popularity of this site may provide an opportunity for public health intervention.

Public health intervention is a noble goal, but YouTube may not be the place where it happens. In fact, people seem to use the site as a platform to talk about the things they find fun, despite their possibly negative outcomes (see: people who do daredevil things, "fail" videos, pretty much everything). Here are four more things YouTube videos glorify, despite their potentially bad side effects.

Coffee is not great for you. At least, it's definitely not a health food, though lots of caffeine addicts — ahem, lovers — consistently try to find "hidden benefits" to drinking more java. Yet YouTubers continue making videos about how great it is. Hmm...

All I have to do to find tons of horrifying information about sugar is search my Gmail inbox for emails from my dad, who takes a perverse pleasure in alerting my entire family whenever he discovers a new terrible fact about how bad sugar is for your body and mind. This is literally my inbox:

In case you're wondering where he gets his information, try this article, this other one, or even this extremely disheartening one. Anyway, the good news is that despite all these petrifying effects, people continue posting videos on YouTube of how to make rainbow mug cake.

Sex is the ultimate risky fun, though the risks are definitely easier to avert with sex than they are with, say, coffee or sugar — or my personal weakness, coffee with a hundred sugars. If there were a pill or condom I could use to eat espresso cupcakes and not deteriorate into a rotten-toothed sugar stick, you better believe I would be first in line. The variety of videos about sex on YouTube definitely vary more than the ones on the subjects in the rest of this list. For example, Laci Green, whose video is linked above, is very informative about the pleasures as well as the dangers of sex. So that's good.

We all know about how many cat videos there are on YouTube. At times, delving into a nightlong binge of cute cat clips can seem like a good coping skill that doesn't hurt anyone. But remember the negative impacts cats can have, as we bring it full-circle back to Gilmore Girls:

More like this
Starbucks' Summer Menu Includes A New Chocolate Cream Cold Brew
By Emma Garza
Michigan’s Governor Is “Going To Fight Like Hell” To Protect Abortion Access
By Andrea Zelinski
I'm 42 & I've Never Had Sex. Is It Too Late?
By Sophia Benoit
Help! My Partner Only Wants Sex Late At Night & Won’t Compromise
By Sophia Benoit
Get Even More From Bustle — Sign Up For The Newsletter