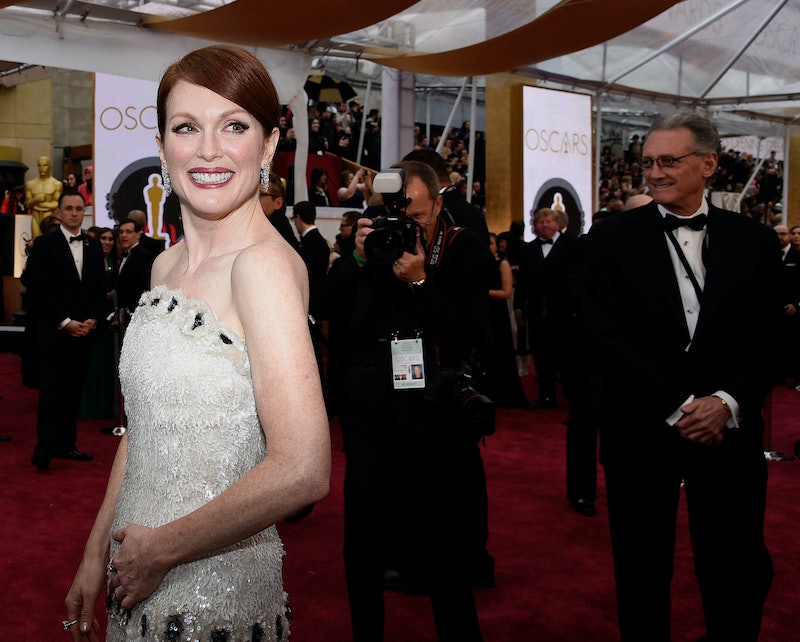 I don't know about the rest of you, but I definitely think snaps are in order for Julianne Moore's Best Actress win for Still Alice, but I have to admit there's a strange thing I noticed between Moore and the 2014 Best Actress winner, Cate Blanchett. Both of them won for roles in which Alec Baldwin played their husband. I know, right? Call me crazy, but could there be a trend here?

Okay, it DOES sound crazy, more coincidental than anything, and it overhauls the tiny moments of girl power we saw Sunday night. Winning Oscars based on being Baldwin's wife? It's ridiculous. Still, skeptical as I am, I did a quick review of five women who played Baldwin's wife (or, to role reverse, starred in a film where Baldwin played their husband) and examined if that role correlated with any accolades, either for that film or for future films.

I know, the comparisons are trite as well. "There's no such thing as Best Actress, as is evidenced by the performances of my fellow actresses," the red-haired angel said at an institution that helps to establish hierarchy within Hollywood's elite. Bless. Still, awards count for something, and you know you're curious, so take a quick peak at this recap.

Role: One half of the Maitlands, a ghostly couple stranded in their former house, forced to co-habilitate with a pretentious artist, her meek husband, and his delightful daughter Lydia (the OG goth girl.) Has questionable taste in floral dresses.

Awards for this Film: I mean, it's a Tim Burton film, nobody really does those for the likelihood of snagging an acting Oscar (which is something someone should've told Amy Adams). The only Academy Award it won for was Best Visual Effects and Make-Up, and, across the board, Davis wasn't nominated for any real awards.

Award History Overall: Despite this, it's important to note that, the following year, Davis won Best Supporting Actress for The Accidental Tourist. In 1992, she also scored nominations and acclaim left and right for her role as Thelma in Thelma & Louise (although, to be fair, Susan Sarandon also got noms for being Louise).

Michelle Pfeiffer in Married to the Mob

Role: Pfeiffer is basically a mob wife trying to find herself and to escape from that crowd. Which, wise choice, considering it's the mob and all...

Awards for this Film: Nothing huge. She was nominated for a Best Actress in a Musical or Comedy Golden Globe, but it ends there.

Award History Overall: No Academy Awards won, but she was nominated for Best Supporting Actress for Dangerous Liaisons and Best Actress twice for The Fabulous Baker Boys and Love Field. The latter two came definitively after Married to the Mob, so either there's the beginning of a Baldwinian trend, or we're just capturing these ladies at the peak of their career.

Kim Basinger in The Marrying Man

Role: That is most definitely her in Wayne's World 2 above, but anyway. Basinger is Vicki, a glamorous singer who Baldwin's character gets somewhat forced to marry in Vegas. Basinger also had a role as Baldwin's real life wife for several years after this.

Awards for this Film: Basinger got a Razzie nomination, so take that as you will.

Award History Overall: Yikes, more Razzie noms than anything else. Not to worry, though. Basinger did win the 1997 Oscar for Best Actress in a Supporting Role for L.A. Confidential. That's one more Oscar than you and I have.

Meryl Streep in It's Complicated

Role: Technically here she's not so much Baldwin's wife as she is his ex-wife, but they're carried into a post-marital extra-marital affair (I know, confusing) with one another by the plot. So, you know, gray area.

Awards for this Film: Nothing won, but she did get a Golden Globe nom for this film, which I didn't expect.

Award History Overall: Um, this is the queen of the Academy Awards, with 29 nominations and three wins all together. I think she's doing fine.

Role: Blanchett is Jasmine, a wayward soul with pain, deceit and infidelity in her past, and crumbling sanity in her future. Suffice it to say, the relationship she had with her husband is part of the past. It's all very Streetcar Named Desire.

Award for this Film: Blanchett snagged many awards for her performance, but, as noted earlier, the most important accolade was the Best Actress Oscar.

Award History Overall: Like Streep, Blanchett has no dearth of awards, and, in fact, that was her second Oscar, having won a Best Supporting Actress award for The Aviator years prior.

Conclusion: While there are some interesting trends at work here, overall, I would suggest that Baldwin has simply just been paired with some amazingly talented women. His presence certainly didn't determine the star power of Blanchett, and everyone knows he's not the reason Streep is such a consistent success. So, at the end of the day, I just I hope he realizes how lucky he is to be surrounded by so many wonderful actresses.