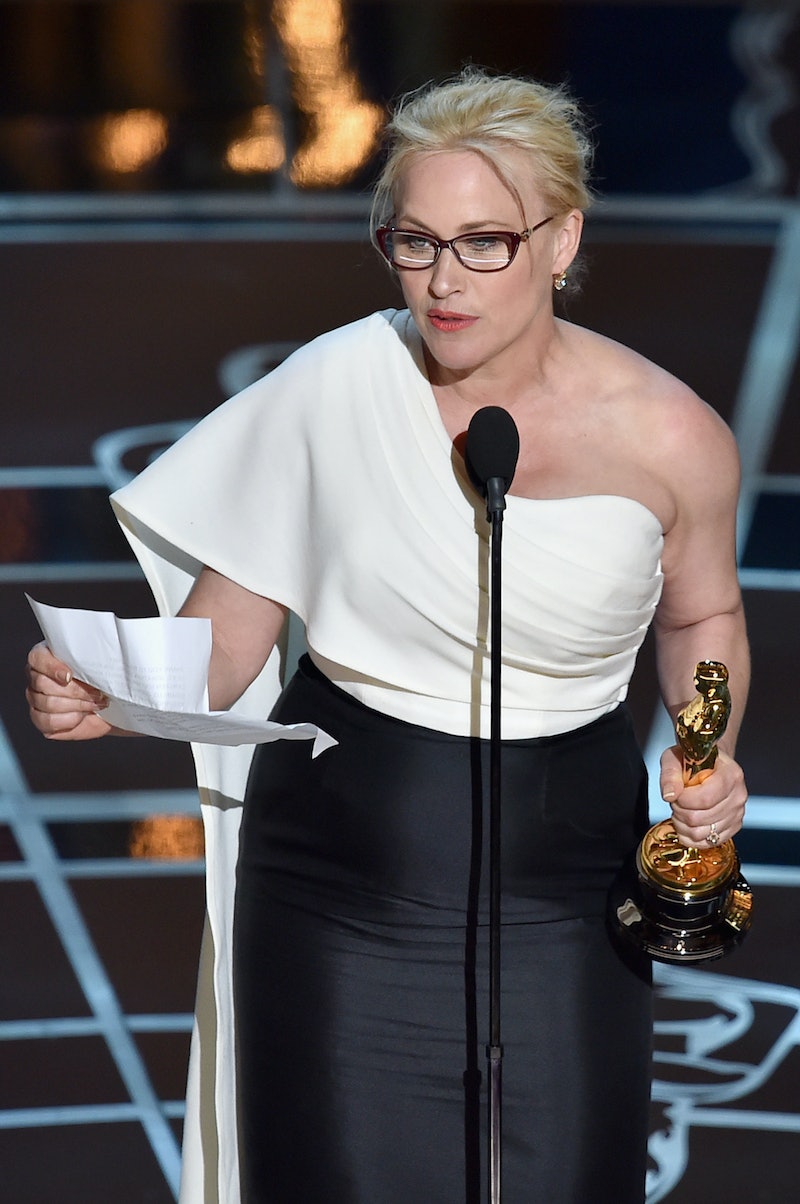 If you were watching the Oscars looking for feminist shout-outs or women calling out their oppressors, you might've been disappointed; save for an inspiring speech by Supporting Actress winner Patricia Arquette that called for equal rights, the 2015 ceremony was mostly devoid of any particularly notable moments of female empowerment. That's not to say the night was absent of feminism completely, however — many of the Oscars' most female-friendly moments actually happened before the show even began.

During the red carpet pre-show, the #AskHerMore campaign was proven to have a real effect on the questions reporters asked stars on the red carpet. Yes, there were a few less-than-ideal moments (what was up with those interviews of Chrissy Teigen and Sienna Miller, Ryan?), but for the majority of the night, the questions asked to female celebrities were more in the range of "what made you take the role?" than "who did your makeup?" It was a refreshing change of pace for a red carpet, and made even better by the lack of a Mani Cam (good riddance.)

One of the highlights of the pre-show was a quote by reporter Dave Karger, who broke up the backstage chatter about dresses and hairstyles to bring attention to the lack of female-driven movies in this year's Best Picture race. To refresh your memory, all eight of the contenders for the Oscars' biggest category were solely about men; the few female-led films that did make it into the competition, like Wild and Gone Girl were relegated to the other categories. Speaking on the matter, Karger said that he was "dismayed" about the lack of movies starring women vying for Best Picture, and that for him, their absence in the race is an issue of importance.

Karger also spoke highly of Wild star Reese Witherspoon, who has shown her support for feminism and, specifically, the #AskHerMore campaign both in the past and on Sunday night's red carpet. In an interview, the actress explained her reasoning for taking part in the hashtag.

"This is a movement to say we're more than just our dresses," she said.

It was a wonderful show of feminism by Witherspoon, and one echoed by her fellow star Lupita Nyong'o, among others. Speaking to a reporter, the actress said that she prefers questions about her work to those about her appearance.

"I enjoy being asked about my craft, my profession," she told the interviewer. "That's where I'm an expert."

As the show began, the feminist moments became less apparent; there was, thankfully, no outright displays of sexism, but the fact that so many of the nominees were men, representing films about men, was a black cloud hanging over the evening. The first truly feminist moment of the night was when Crisis Hotline: Veterans Press 1 director Ellen Goosenberg Kent and producer Dana Perry took the stage to accept the award for Best Documentary Short. It may be a category that viewers tend to ignore, but the importance of the moment — two women accepting an award for directing and producing — could not be understated. Rarely does that feat occur at the Oscars, or, unfortunately, at any awards shows at all, and it was a wonderful, empowering sight to behold.

The night's biggest show of feminism, however, came shortly after, when Patricia Arquette won the Oscar for her supporting role in Boyhood. The actress has often spoken out about her beliefs in equality, and tonight was no exception; Arquette ended her speech with a rousing shout-out to her fellow women and called for a change in their treatment.

"To every woman who gave birth, to every taxpayer and citizen of this nation, we have fought for everybody else's equal rights," said Arquette. "It's our time to have wage equality once and for all, and equal rights for women in the United States of America."

It was a powerful moment, with shows of support — including a particularly memorable one by Meryl Streep — coming from across the room. Unfortunately, it was also short-lived; after Arquette's speech, none of the winners or presenters took the time to make feminist statements of their own. Yes, Julianne Moore won her Oscar for taking on a complex female role, and Common and John Legend used their acceptance speech to acknowledge the struggles of all those oppressed, but nothing that came later in the night could compare to Arquette's deliberate, affecting shout-out.

Yet while the Oscars certainly could've used more feminism, the night was far from a disappointment. As stated, both Arquette and Moore won for playing wonderfully complicated women, and the surprisingly non-sexist red carpet questions were a fantastic change of pace. Still, it would've been nice if the show and its nominees put feminism more in the spotlight, acknowledging the lack of female-driven films in the race or praising Ava DuVernay for her contributions to film, regardless of that snub for Best Director. Yes, subtlety is better than nothing, but as tonight showed, it's still far from enough.

More like this
Sandra Bullock, Girlboss Extraordinaire
By Matt Harkins & Viviana Olen
The 'Hocus Pocus' Sequel Finally Has A Release Date & It Makes Total Sense
By Shannon Barbour and Radhika Menon
Laura Dern Said “Cultural Awareness” Made Her Rethink This 'Jurassic Park' Fact
By Grace Wehniainen
Colin Firth Revealed His Favourite Mr. Darcy (& No, It's Not Himself)
By Sophie McEvoy
Get Even More From Bustle — Sign Up For The Newsletter