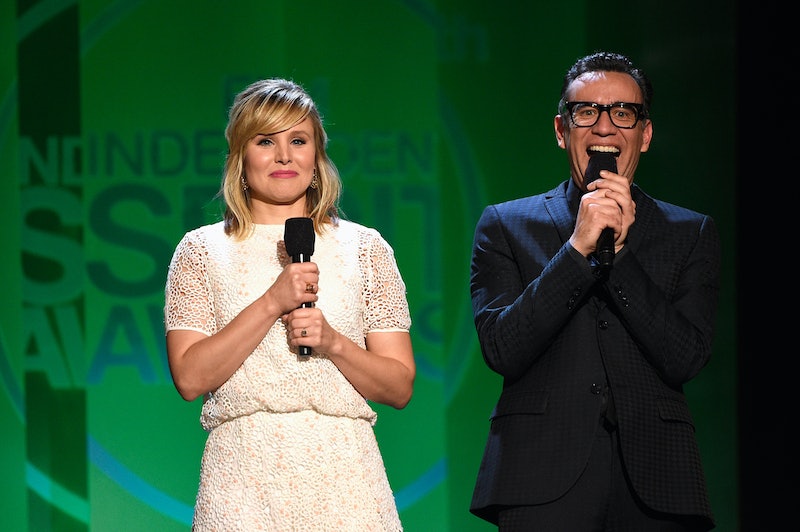 If you missed the 2015 Film Independent Spirit Awards, listen up. As we predicted, co-hosts Kristen Bell and Fred Armisen were hilarious and fantastic together, kicking off with a cold open spoof of Birdman that felt like a Saturday Night Live sketch. And no, it wasn't just because of Armisen and another SNL alum who popped up at the end of the bit; it was just spot-on and poked fun at parts of the film in the best ways. There were plenty of memorable moments throughout the video, including Armisen as Riggan (Michael Keaton), attempting to move an object with his mind, and Bell delivering an epic slap — there are many of those, actually — as the tattooed, cynical Sam (Emma Stone). The only bad thing about this spoof is that it didn't go on longer. I would have loved to see who they picked for Mike (Edward Norton) and Lesley (Naomi Watts). In my mind, they were Dax Shepard and Kristen Wiig, respectively, because how perfect would that be? Bonus points if they threw in some sloths somewhere to really rile up Bell.

The whole spoof is awesome, but I've narrowed down 11 of the best moments below. Spoiler alert: no tighty whities were involved — Neil Patrick Harris in his underwear at the Oscars made up for it, though.

When Armisen Reminisces About His Days As Prince

Then He Falls To A Thud After Levitating

It's not as cool as it looks.

When Adam Scott Is Zach Galifianakis

Damn, he looks good in glasses.

Giving Emma Stone a run for her money.

Armisen's Attempt At Moving Things With His Mind

He tried. He tried very hard.

When All That Drumming Is Just Miles Teller From Whiplash

"ARE YOU RUSHING OR ARE YOU DRAGGING?"

Not to be confused with NBC's The Slap starring Zachary Quinto. Teller's reason for the slap? "Because I love Portlandia and you only make 10 shows a year, you lazy bastard."

He plays the director, explaining why this movie is one single shot and there can be no retakes.

So hard that it sends Armisen's glasses flying.

Sealed With A Kiss

SNL reunions are always so satisfying.