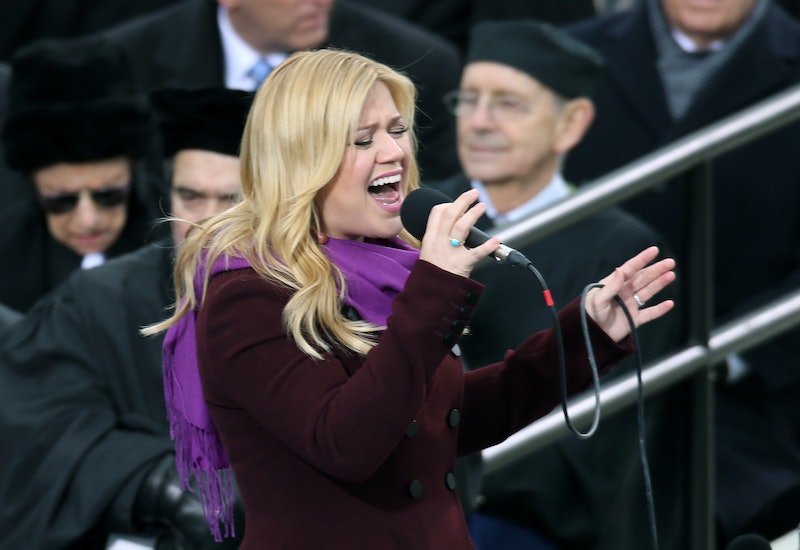 On Monday, Kelly Clarkson premiered her new single, "Invincible," and it's the empowerment anthem to end all empowerment anthems. It makes "People Like Us" sound limp; it makes "Stronger (What Doesn't Kill You)" sound weak. In fact, it's one of the most striking pop songs I've heard in recent memory! So, why on Earth wasn't it chosen as the lead single from Clarkson's new album, Piece By Piece ?? Don't get me wrong, I love "Heartbeat Song" — but "Invincible" makes a much more powerful statement. It says to the world: "Kelly Clarkson is BACK, y'all. Get ready."

You know I was broke down, I had hit the ground

I was crying out, couldn't make no sound

No one hears the silent tears collecting

You know I had lost hope, I was all alone

Never been so low 'til you came along

Teacher, I feel the dots connecting

The strings swell and the drums thunder as Clarkson launches into the massive chorus:

Now I am invincible

No, I ain't a scared little girl no more

Yeah I am invincible

What was I running for?

I was hiding from the world

I was so afraid, I felt so unsure

Now I am invincible and I'm a perfect storm

According to Billboard, "Invincible" was co-written by Sia and produced by Jesse Shatkin and Greg Kurstin — the same team behind Sia's "Chandelier." The soaring mid-tempo ballad really shows off Clarkson's impressive range, and I think its lyrics are going to resonate with a lot of listeners. With any luck, "Invincible" will become a hit. (Unfortunately, "Heartbeat Song" has struggled to make a significant impact on the charts.)

In a recent interview with ODE, Clarkson confirmed that "Invincible" is the next official single from Piece By Piece. However, according to the singer's Twitter account, new "countdown" songs will continue to debut online until the album is released on Tues., March 3. Woo hoo!

"Invincible" is available on iTunes now.