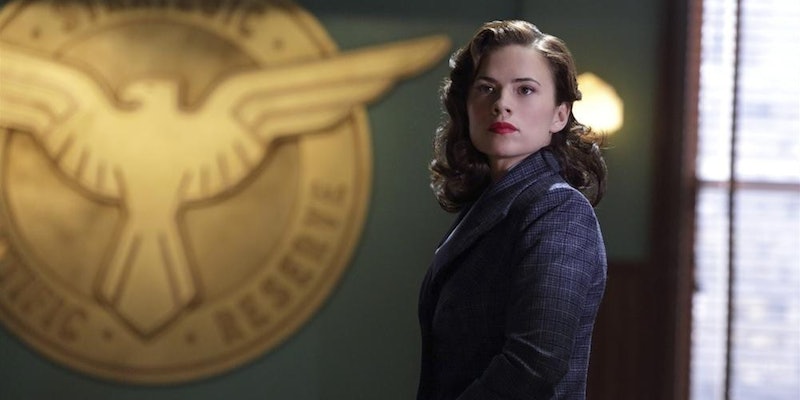 As we draw closer to the end of the phenomenal first season of Marvel's Agent Carter , I can't help but look to the future. No, the show hasn't been renewed yet, but my fingers are definitely crossed, hoping for some good news in the coming weeks. If ABC loves us they'll give us more episodes and WHEN they do (not up for discussion, at this point), there are a few characters who we need to see on Agent Carter Season 2.

It'd be cruel to even think about the idea of Captain America stopping by, because in Peggy Carter's time he's still frozen in a block of ice somewhere, not yet discovered. It would be cool for maybe a Steve Rogers flashback or flash-forward, but the well of Marvel characters who would fit in on the series isn't even close to being depleted. ThoughAgents of S.H.I.E.L.D. has introduced a dozen or so comic book characters into the universe, Agent Carter, aside from Peggy herself, Howard Stark, and Edwin Jarvis, hasn't tapped into that potential yet. A second season would give the show an opportunity to bring all these Captain America characters to life. So when ABC comes to its senses and orders a second season, here's who should join Peggy.

Tommy Lee Jones played Col. Phillips in Captain America, and it's about time he came to the small screen. Even though the war's over, he's out there somewhere, right? It's stated in Winter Soldier that he, Stark, and Peggy were all founding members of S.H.I.E.L.D., so he's gotta pop up at some point.

Who is Private Lorraine? She's got a split second scene in First Avenger — in which she plants a big wet one on Steve — but she's played by Natalie Dormer. Don't you want to see Peggy Carter face off against Margaery Tyrell?

Where are they? Are they still back in London, where Peggy was born? You'd think they might know a little bit as to what their daughter is up to, and it'd be amazing to watch a scene of the two of them tap dancing around the fact that their daughter was involved with Captain America and is now a badass SSR agent.

Howard might be gallivanting all over town with different women right now, but eventually he settles down with Maria, and the two of them have a little baby Iron Man — uh, Tony Stark. When do they meet, and how do they meet? Do you think Howard asks Peggy for real and true dating advice when he finally decides to get serious? We need to see the beginning of this love story.

Jarvis has talked in length about his wife Anna, and we heard her voice from off screen a few times. But we've yet to actually see her, which is a little bit odd. Why are they hiding her from our sight?