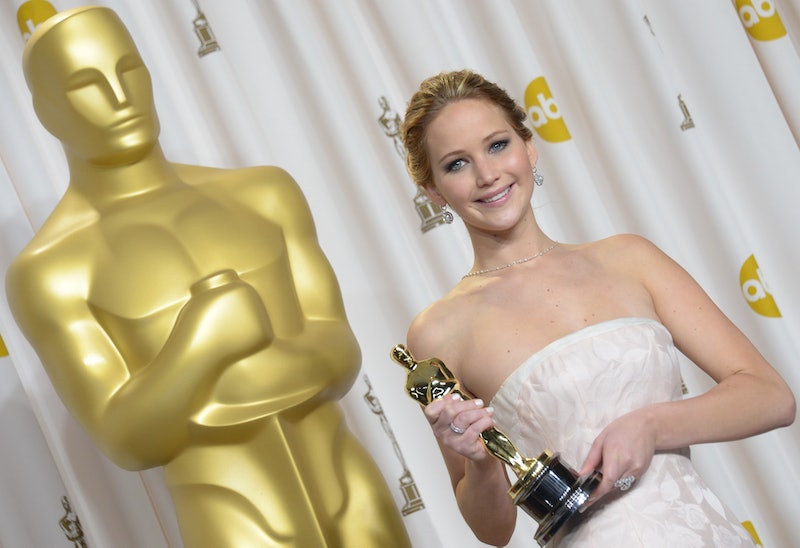 Despite having showman/magician/Halloween costume contest extraordinaire Neil Patrick Harris as host this year, the Oscars were some of the most ho-hum in years. Other than Tegan and Sara's performance with the Lonely Island, Patricia Arquette's incredible acceptance speech, and Common and John Legend having the most emotional moment of the night, the Oscars were pretty darn forgettable. It was also missing some big stars. No Brangelina. No Leonardo DiCaprio. NO JENNIFER LAWRENCE! That's what the Oscars really needed, everyone's favorite golden gal: but, apparently, Jennifer Lawrence instead decided to opt out of the Oscars and go to a mall in Boston. People Magazine reports that while shooting her current project Joy, Lawrence took last Sunday to peruse the Shops at the Prudential Center in the city.

And what a year for her to miss considering there were so many awesome feminist moments at this year's ceremony. Could you imagine if she had been sitting next to Meryl streep and Jennifer Lopez? A Meryl/J.Law/J.Lo sandwich. Be still my heart! Though I guess I can't be totally surprise that Lawrence spent the weekend in yoga pants while shopping and hanging out with her dog rather than getting all gussied up for the red carpet. She's just that kind of woman. Respect.

Here are all of the reasons we needed Jennifer Lawrence at the Oscars.

A Much Funnier Red Carpet

All of the Most GIF-able Moments

I would have probably felt the same.

I reckon she would have gone off script and just had fun with it. Screw the teleprompter!

Actual Funny Bits with the Audience

She would have been the opposite of Leo and pizza.

She Would Have Completed the Trifecta of Awesome

Emma Stone and Anna Kendrick were in the house. They were just missing Lawrence to complete the full list of the Internet's BFF's.