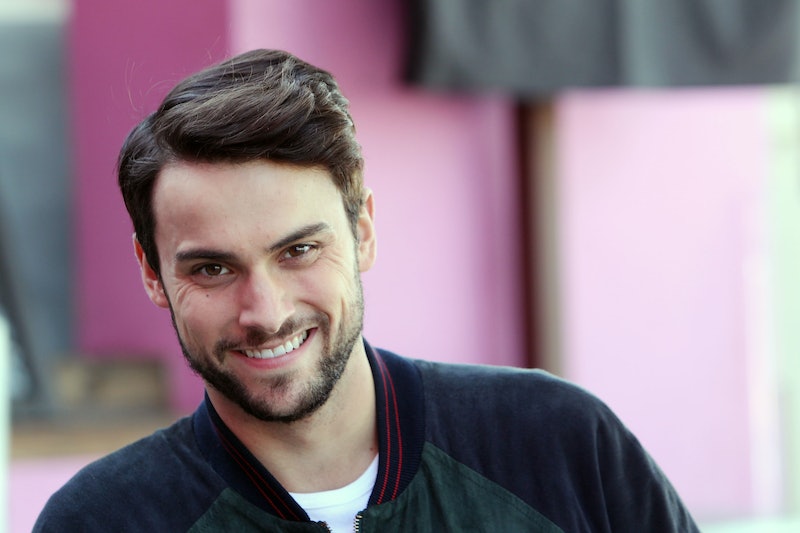 The finale of Season 1 of How to Get Away With Murder is among us and there are about a million to answer regarding the plot. Who killed Lila? Will the students be revealed as the murderers? Will Annalise get Nate off? Will Bonnie tell? What's the deal with Rebecca? I could go on and on. Besides the plot, there are many questions regarding the cast and who will or will not return for Season 2 of How to Get Away With Murder . Jack Falahee, who plays Connor Walsh on the ABC hit show is arguably one of the show's biggest breakout stars. But will Falahee be back to reprise his role in Season 2 of HTGAWM ? As Karla Souza told Bustle, no one but Peter Nowalk knows.

Falahee plays the sharp-tongued and minded future lawyer, Connor Walsh, part of Annalise Keating's five core students. He's smart and manipulative, he's ethics are questionable, but he's also weak — which we saw come into play when Connor cracked under the pressure of being an accomplice in Sam Keating's murder (do you blame him?). Connor's humor and darkness — and OK, "Coliver" is a fan favorite couple, too — is too good to not have on the second season of the show. ABC has been very tight-lipped on who will be returning for Season 2 — in a perfect world, everyone would be back, right? — but here's my pitch as to why we need to see Falahee return to the show.

Connor Has a Twisted Sense of Humor

This show isn't a comedy by any means, but Connor is definitely a dim ray of light on an otherwise dramatic TV show. And he's not like goofball funny, he's like "I've killed someone but I still occasionally watch Comedy Central funny" and isn't that what TV needs more of?

Bustle's Alex Kritselis wrote a great essay on the importance of having a character like Connor on TV. Unlike some gay characters on network TV shows, Connor represents a reality that other shows have shied away from. As Kritselis puts it, "There are real gay men in the world today who are just like Connor: Gay men who have active sex lives, gay men who enjoy sex, and gay men who use sex as a means to get what they want..."

This is probably the only couple on the show that I'm really rooting for, as everyone else seems to be corrupt in some sense. Sure, the two have gone through their fair share of rough patches, but Oliver needs Connor and Connor needs Oliver.

Connor Will Do What It Takes To Get Away With It