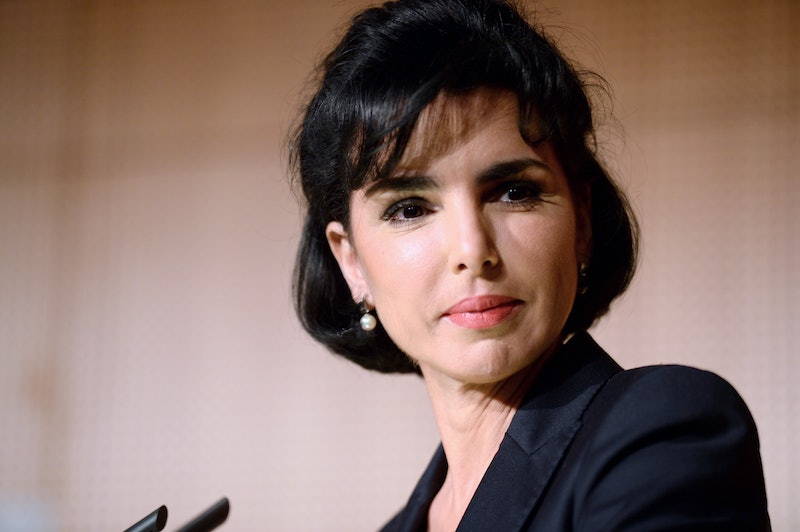 I’ve always had an issue with office life. Not only would I want to avoid the water cooler like the black plague (no, Doug, for the fourth time, I didn’t touch your coffee mug), but I’m pretty sure I’d lose my mind under the daily regimen of fluorescents and beige. While the word "tickler file" does make me want to cringe, the real reason I wouldn't be able to last isn't so much because of the little nuances that make office life, office life. The real reason is that I have a hard time acting in a way that’s not like myself — which is rule number one in downtown offices. Especially in ones where you want to succeed.

And this is coming from experience. I’ve always found it curious that, if you’d like to be taken seriously, you’d have to dress the part. And “the part” seemed to be something strictly male. Women would walk around the office wearing dull black pantsuits with boxy blazers (which would've been fine had those fashions actually been their style), hinting to the fact that there was a female under there with the wink of small hoops at their ears. Granted, some of them would be a little more expressive with their personality and go for an off-white collared shirt rather than a white one, but if you ventured to wear things like striped sweaters or skirts that didn’t resemble pencils (see: me), you’d be asked for the remainder of your time there to water your boss’s plants, like a good little secretary. Even though, as you’d politely remind him, you weren’t the secretary. And, you’d point out, nodding towards his desk calendar, even if you were the page didn’t read “1950” anymore.

But it didn’t matter.

So as I’d stand there, watering his plants with the remainder of my coffee, I’d think about these thoughts: How you never really see a woman in a high position just wearing a dress and flats, going about her business and killing it without the help of shoulder pads. That somehow we all began to subscribe to the idea that an ill-fitted blazer helps you close the deal or nab the highly sought after client. And a fun cardi would somehow make all your clients call at once and drop your business.

But we all know that’s not true. Yet, at the same time we all know that we have to blend in with a traditionally masculine look in order to reinforce that it’s appropriate we’re here. That our boss didn’t make a mistake hiring us because — look! — we’re just like him. We exude strength now in our two-piece suit, because a dress doesn't convey being capable and tough. Because being feminine isn't capable and tough; it's strictly a dude-centric type of thing. Right? And what’s more is... we actually do it. And by doing it, are we believing it, too?

In order to do something brave like stand out or take the first step towards change, we usually need a role model or two to show us that it’s possible. So here are six inspiring and powerful women who show that to be strong and female doesn't mean to be an imitation of our male counterparts. These ladies run empires, countries and boardrooms and do so whilst embracing their femme styles.

Introducing Marissa Mayer. Google's first female engineer, Stanford professor and CEO of Yahoo! She was listed sixth in "40 Under 40" by Fortune Magazine, and deemed the sixteenth most powerful business woman in the world.

Yet, her watercolor dresses and bold color choices command the same amount of respect as an Italian tie. Imagine that.

A French politician and a Member of the European Parliament, Dati is a tour de force. Before her election she was the Minister of Justice in France, as well as mayor of the 7th Arrondissement of Paris, which houses important tourist attractions such as the Eiffel Tower and Napoleon's resting place. All of which she does in a pair of killer boots and swinging skirts.

If Dati can show up to a political conference in statement heels and still clearly outline her positions, then surely you can do the same in your boardroom.

Being the Executive Vice President of Development & Acquisitions to one of the biggest real estate companies in the world is no small order. But one that can be done in silk dresses and saturated colors.

As a member of the executive management team of The Trump Organization, she appears at press conferences in suits. Just like her male counterparts. But on her terms.

Creator of one of the "fastest growing companies," in retail, Amoruso is the founder and former CEO of Nasty Gal. An online vintage store that started out on E-bay, Amoruso skyrocketed her business to reach revenues in the millions in just a matter of years. In 2011 the company was pulling in $24 million, marking an 11,200 percent three-year growth rate. With business smarts like that, Amoruso proves that a pronounced sense of style most definitely doesn't take away from one's capabilities.

While most of us know Michelle Obama as our First Lady, she's also a graduate of Princeton University and Harvard Law School, after which she went on to work at Sidley Austin, the sixth largest U.S. corporate law firm. After that she switched over to a few other careers, one of which was being Executive Director for the Chicago Office of Public Allies, where she set fundraising records during the years she had worked there. She did all this and still managd to land Vanity Fair's "10 of the World's Best Dressed People" list. Her bold and playful outfit choices have never subtracted from her work ethic or her ability to kill it.

The Editor-in-Chief of American Vogue for 27 years, Anna Wintour's eye for high fashion doesn't detract from her sharp business sense. And doesn't soften her demanding demeanor, for that matter. Case in point: Her nickname "Nuclear Wintour," a play on words for "nuclear winter." Which just shows you that even if you have to or want to be cut-throat, you can still do it in a fabulous dress.

The point that I'm trying to make isn't that a woman should "dress like a woman" — because definitions of "womanhood" are broad and varied. Some of us like to dress in masculine pieces. Some of us cringe when we hear, "You'd look so nice in a skirt," or, "Why don't you ever wear a dress?" The point I'm trying to make isn't so much on the actual style, but the weight that the word "feminine" carries. It's still seen as a negative; as a weak trait. It implies that if you're soft and colorful and gentle, you won't be able to handle heavy responsibilities or will break under the weight of a grueling work ethic. If you're soft and colorful and gentle, then you can't possibly be strong-minded and powerful.

But as these women prove: Sorry son, that's not going to work. We'll kick ass, and do it without blending into that beige carpet or yours.