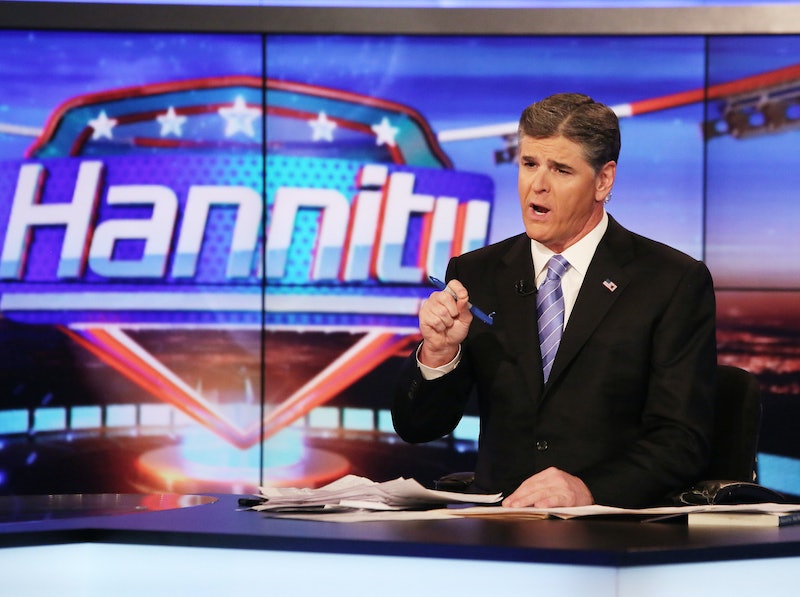 Add to another topic that should be off-limits for Fox News: the Academy Awards. Since the Neil Patrick Harris-helmed Oscars aired on Sunday, February 22, the anchors and talking heads on Fox have been picking apart the ceremony in a stunning display of ignorance. The latest offense came on Tuesday night, when Sean Hannity spouted his rage about John Legend's Oscars acceptance speech for "Glory," protesting that the musician "doesn't know anything about politics."

It's not the first insult, though, that FOX has hurled insults at the largely politically charged 87th Annual Academy Awards. Hannity's comments come in the midst of an across-the-networks scrutiny about the dependability of news anchors and the truths they tell; Brian Williams, of course, is on suspended leave from NBC News for six months after he revealed that he falsified stories about being on a helicopter that was downed in Iraq. Not long after, Bill O'Reilly's anecdotes about reporting from a dangerous zone in Buenos Aires were squashed as myths by a CBS correspondent. FOX has responded with ire to the results of the Oscars and to the ceremony, and it doesn't just begin and end with Sean Hannity. Here's the trainwreck so far (though we're dreadfully sure there will be more).

After an intensely powerful performance of "Glory," John Legend and Common won Best Original Song and gave a passionate speech urging people to wake up and realize that racial inequality in this country is still palpable and that protests and loud voices are required to incite social change. This didn't sit well with Hannity, though, who said on air that Legend knew "nothing about politics" and he shouldn't have "made it all political."

A newsman should know that no media exists in a vacuum, especially not in the world of entertainment, so where is his criticism of Legend coming from? How could a song from a movie about the civil rights movement — in a present moment that is so timely — NOT be political? Selma was as much a film about the persistence of racism and inequality in the United States as it was about Dr. King's own life, and ironically, Hannity has proved that message tenfold in criticizing Legend.

Though ultimately Patricia Arquette's charged speech demanding wage equality was undermined by her backstage footnote that it's time for gay people and people of color to stand by women for equal pay, Stacey Dash was flustered by Arquette's speech itself:

First of all, Patricia Arquette needs to do her history. In 1963, [President John F.] Kennedy passed an equal pay law. It’s still in effect. I didn’t get the memo that I didn’t have any rights.

Yes! She must do her history! She must provide the numbers that show women are totally paid the same as men, not paid way less even when they are just as qualified, and paid even less than that if they are minorities! Ugh, Stacey Dash, what happened? We were all rooting for you.

Some lovely words from our favorite Oompa Loompa, Donald Trump, about Alejandro G. Iñárritu winning Best Director for Birdman: "It was a great night for Mexico, as usual. This guy [Iñárritu] kept getting up and up and up. I said, ‘What is he doing? He’s walking away with all the gold.’ Was it that good? I don’t hear that. But it was certainly a big night for them."

Trump seems to just keep topping himself with regards to the shit that comes out o his mouth. He made the comments on Fox & Friends, and it seems like there really is no bigger Friend to perpetuate Fox's skewed view of America than Trump. "It was a big night for them," is so poetically xenophobic. Because Trump doesn't seem to understand that American is a nationality, and doesn't only apply to white people. Nice.

It Goes All The Way To The Local Level

Cleveland news anchor Kristi Capel, who co-hosts Fox 8 News In The Morning, went straight for the gold when she described Lady Gaga's music as a racial epithet. As Yahoo! News reports: "The former beauty pageant queen, who was crowned Miss Missouri USA in 2006, used the ethnic slur for African-Americans from the early 20th century to characterize the singer’s well-known dance-pop music — in contrast with her performance at the awards ceremony."

To make matters even worse, Capel was talking (and laughing about it) to her African-American co-anchor, Wayne Dawson, who laughs too, but in that "whatdid you just say to me?" kind of way. Though she later apologized on her Twitter in the classic non-apology style ("I'm sorry if I offended you,") there is absolutely no excuse in the world for using racial slurs on the air.