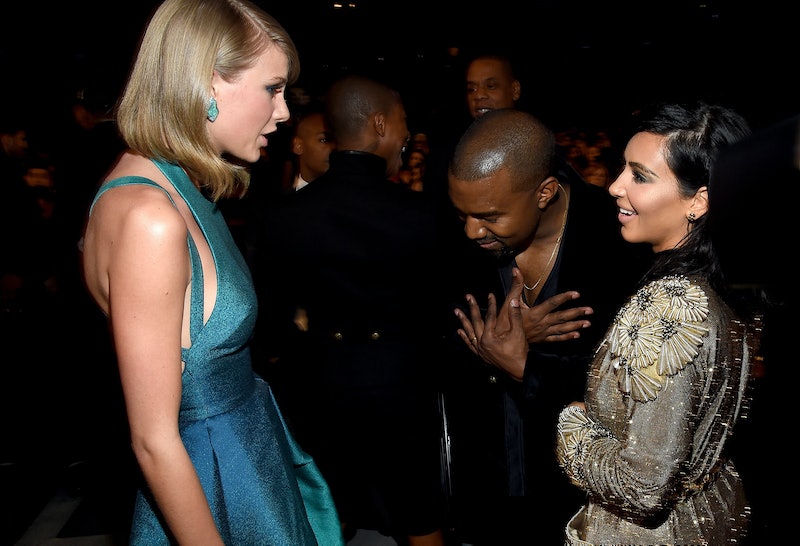 The day seemed like it would never come, but as of Thursday morning, it looks like it finally has: Taylor Swift has officially made friends with every last female celebrity in Hollywood. From Lena Dunham to Lorde, Karlie Kloss to Cara Delevingne, Swift's collection of lady celebs is legendary, but until recently, it was missing one key member. Now, though, it seems there's not a famous woman left in a 100-mile radius that the singer hasn't befriended, because after dancing with her at the BRIT Awards and taking tons of photos together, it looks like Swift is now BFFs with Kim Kardashian. Yes, really.

It's not as strange as it seems. We knew the duo had met before, most prominently at the Grammys, when the singer ended a feud with longtime enemy/the reality star's husband, Kanye West. But it was only the video of them dancing together at the BRIT Awards, and the several photos posted by Kardashian of them that followed, that made it clear they were more than just mere acquaintances.

Yet even once you come to terms with the fact that the stars' bond is real, you probably still have some questions: namely, what would a Swift-Kardashian friendship even look like? Here are my theories:

They DON'T Just "Hang Out"

In what world can you see Kim baking cookies or playing with Olivia Benson (the cat, not the person)? It would never happen, and while Taylor likes the occasional fashion show or photoshoot, I can't imagine that she's down to spend all day in Kim's world, either. When the two see each other, it's mostly at events — awards shows, after parties, birthday celebrations — and while they might wish it happened more often, they both know that regular hanging out — whatever that means — is just not in the cards.

They DO Bond Over Kendall and Cara

Kim, obviously, is close with her model sister, and it's appeared from many photos from parties that she's also befriended Kendall's pal Cara Delevingne. Taylor, too, is close with both women, so much so that she has a picture on her phone of the three of them lying in her bed wearing colonial-like nightgowns. "Hanging out" might mean very different things for Swift and Kardashian, but with the two models as their common ground, I bet they'll find a way to make things work.

It's hard to imagine any two female celebrities who dress less alike than Swift and Kardashian. The singer, as we all know, prefers cute dresses, high waisted shorts, and crop tops, and hates anything that shows off too much skin. The most conservative the reality star gets, meanwhile, was when she wore a glorified bathrobe to the Grammys. It's safe to assume that in regards to fashion, the stars' friendship doesn't hold much weight.

They DO Influence Each Other's Social Media Strategies

Swift isn't typically one for selfies, but you can be sure Kardashian's set on changing that all up. As for the TV star, her photos and posts have often looked too staged and severe, but with the help of image queen Swift, her social media game will seem much more spontaneous in no time.

They DON'T Talk About Boys

Because really, what would they even say? Taylor would be all, "ugh, he still hasn't texted me back, this is so annoying, what do I do?" and Kim would be all, "uh, my ex-boyfriend released a sex tape that made me famous and my current husband publicly declared his love for me for like, years, so I don't really know. Sorry!"

They DO Play With North

Kim has a baby. Taylor loves babies. It's a match made in heaven.

They DON'T Invade Each Other's Projects

I highly doubt Swift would let Kardashian, beloved singer of the 2011 classic "Jam (Turn It Up)," within 10 feet of a microphone, and I have a feeling the Grammy winner isn't exactly dying to make an appearance on KUWTK, either. Although... could you imagine? Kris wants to take singing lessons and Kanye's busy, so Kim enlists Taylor to help her mom out, all while Kendall cringes in the background. It'd be so good.