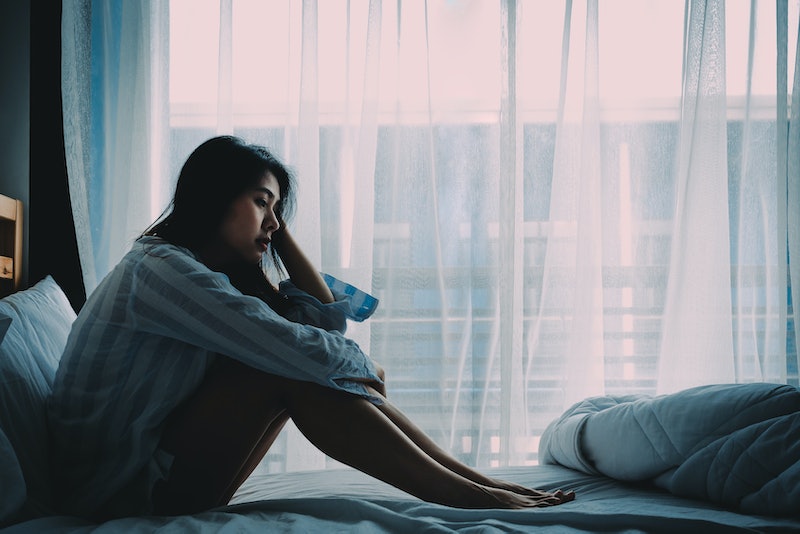 Editor’s Note: February 22-28 is National Eating Disorder Awareness Week. Each day this week, we’ll be featuring a piece about women’s body image. And remember: If you’re struggling with poor body image or an eating disorder, you’re not alone, and help is available.

I try not to think about the girl I was the year I turned thirteen.

My battle with anorexia began the way a lot of girls’ stories do: it was sneaky and quiet and happened all at once. I will never be able to explain the day that a switch seemed to flip in my brain. I was a model student, a very competitive swimmer, and awkward in every other aspect of my life. One day before swim practice I must have eaten a lot, because my stomach felt bigger than usual, and so the next day I did the logical thing I could think of to prevent it: I didn’t eat lunch.

It was simple and easy. I honestly didn’t think I was doing anything wrong, because at twelve years old, nobody had ever talked to me about dieting. My own mother dieted occasionally but rarely talked about it with her kids. I didn’t have any major role models in my life who conditioned me to think a certain way about food. It all started in my head, and only grew worse from there.

In a matter of weeks, I was starving myself. I was both oddly proud and very afraid. I was very good at it, both the dieting and the secret-keeping, and I liked the feeling of being good at something. But I started to understand that what I was doing was wrong, and the more I tried to hide it, the worse it got. Friends stopped sitting next to me at lunch because I wasn’t eating; my period stopped entirely; my friend’s mother finally told my mother what was going on, and the shame of being caught was worse than any embarrassment I had ever endured.

Even I was stunned by how completely rooted I was in the disorder. I think, at first, both my parents and I thought that once they had “discovered” my disorder, that would be the end of it. They would talk to me, and it would be over. And the first night we named it, I did feel a temporary sense of relief. It was out of my hands now. Adults knew, and adults were giving me permission to eat. Everything would be okay.

Anybody who has ever suffered from an eating disorder knows that this is far from the reality of it. Even with “permission,” eating felt bad. Weak. Shortsighted. When my mother asked what it was I was trying to achieve, I couldn’t tell her; even with ten years of reflection, it’s still hard for me to understand what I wanted to prove. I had always been skinny in my childhood. Nobody had ever made a bad comment about my appearance or weight. I was marginally faster at swimming after the weight loss, but even my coaches were starting to get too nervous to take me seriously anymore, and I was deteriorating quickly.

My eating disorder felt like a shadow that consumed every aspect of my waking life, no matter what I did or how I reasoned with myself. I desperately turned to Google to read about the recovery rates of eating disorders, and all I found were online chat rooms that were a mixed bag of people both recovering from and promoting eating disorders, who for some reason or another had all landed in the same bleak place.

In these chat rooms were all kinds of women — a few as young as I was at the time, but mostly older women in their twenties and thirties, and all of them had a story unsettlingly similar to mine. It started when they were young, and it never got better. Here they were, years, sometimes decades later, pouring their hearts and their daily calorie counts onto the Internet, desperate for support, for some light at the end of the tunnel.

I remember lying awake at night, comforted by the emptiness in my stomach, but not well enough that I could turn off the horrible, foreboding thought that this was never going to end. I was so tired.

That is when, for the first time, I entertained a dark thought — that maybe it would go on like this until I died. That maybe death was the only way to escape it. So much of it had manifested out of this desire to be in control of myself, and suddenly I was more out of control than I had ever been in my life.

What I wish I had read about then were women who ended up the way that I ultimately did. I had no way of knowing then that there was a possibility that things would improve. I had no idea that after many years of the slow, occasionally excruciating process of fixing my relationship with exercise and food that I would be, in most senses of the word, “normal.” All I could see was failed attempt after failed attempt from women whose stories mirrored mine to a tee.

I have never spoken about my anorexia with anyone outside of my family, nor written about it before, but because it is National Eating Disorder Week and I remember staring into that hopeless void of my computer screen all those years ago, I decided to go back to that place one more time so that I could hopefully tell another person who needs to hear it: You have the power to make things better for yourself. It may be overwhelming and terrifying, and it may take a long time, but anorexia is not a life sentence.

There is no one prescribed way of recovering. For me, it wasn’t one wake-up call, but a series of them. My mother forced me to see a nutritionist a few times, but even the semblance of control over my life that that gave me wasn’t always enough. I went to therapy exactly one time, and talked online with some people who had; for some, it was helpful, but for others like me, it was uncomfortable and strange. It wasn’t until a doctor sat me down and said that if I continued I probably wouldn’t be able to have children that something seemed to get through to my otherwise very determined thirteen-year-old brain.

In the years that followed, I stayed in touch with many of the women on those ana chat forums. It probably wasn’t helpful. I watched them fall on and off the wagon so many times that I was never quite sure if I felt good about my own recovery, or if I should be guilty for not “sticking it out” like they did. I was still impressionable even as I was putting it behind me.

Eventually, I fell out of touch with all of the people I met online. For me, that was around the time when something finally shifted, almost without my noticing. I remember walking through my college dining hall with friends, putting whatever I felt like eating on my plate, when I was finally struck with this crazy notion — I had never pictured a future like this for myself. Back in middle school and even through high school, when I was at my absolute lowest points, I had never counted on something as simple and beautiful as walking through a cafeteria and laughing at a friend’s joke without wondering if I should be allowed to eat a French fry.

That is what I want more than anything for other people who are either suffering from an eating disorder or in the process of recovery. I want all of us to have that simple and beautiful moment that we took for granted before it all began.

I am guilty of something that I am embarrassed to admit: in the two times in my teenage years that I met other people clearly suffering from anorexia — one a person I knew fairly well, and had lost touch with — I didn’t do anything to reach out to them. I told myself at the time that it was because I remembered that embarrassing feeling of not wanting to be found out, and I also knew from other friends that they were both getting professional help.

But in the years that have passed since then I have wrestled with the truth of my silence: I was afraid to go back to that place where they were, and in an even deeper and darker manner, I was jealous. There was still a part of me that wanted to have that “willpower,” that wanted to be like them, and it was easier to turn my back completely than to risk letting them “win.” The two most compelling forces behind the urge to starve yourself are control and competition, and the competitive part was something I still hadn’t managed to healthily funnel some place else.

I am in my twenties now, and enough years have passed that I’d like to think that when I am confronted with this scenario again, I will not turn my back. I will speak.

More like this
This Psychological Effect Might Be Keeping You From Hitting Your Goals
By Lexi Inks
The 19 Best Tweets & Memes About Bisexual Awareness Week
By Lexi Inks
Help! I'm Not Getting Any Attention On Dating Apps. What Can I Do?
By Sophia Benoit
The 12 Best Strapless Bras That Won’t Slip & Fall Down
By Audrey Williams and BDG Commerce
Get Even More From Bustle — Sign Up For The Newsletter