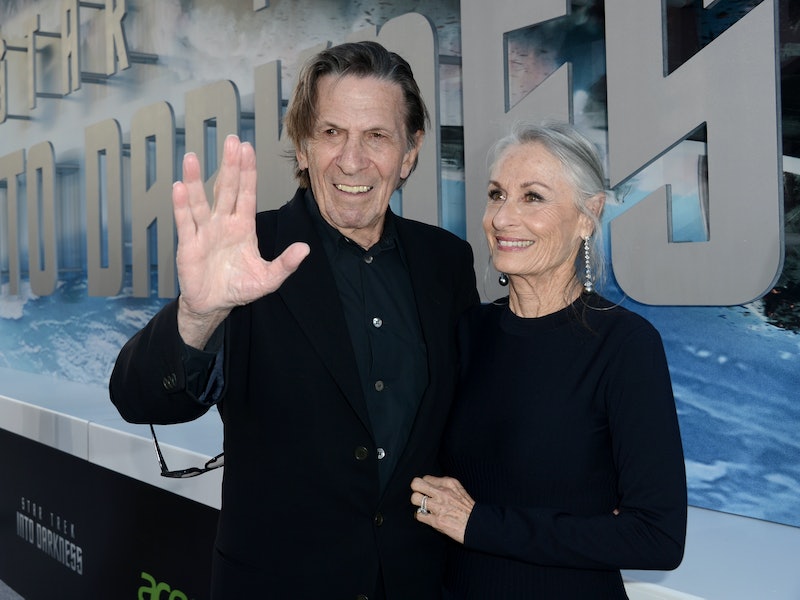 Hollywood lost a legend today. The legendary actor who generated the role of Spock in the Star Trek franchise, Leonard Nimoy, passed away Friday morning at the age of 83. His death was due to complications related to chronic obstructive pulmonary disease, which he was diagnosed with a year ago. His many friends and colleagues in the industry, as well as his fans. have shown an outpouring of grief for the late actor. He was best loved for his work in Star Trek, but Leonard Nimoy was more than Spock (even though he made that character iconic): Nimoy was a Bostonian with an artistic soul, and a very gifted, well-loved human being.

Despite the fact that Spock was famous for being deadpan and often void of emotion, Nimoy himself was quite the opposite: His final tweet certainly showcases just that. The late actor wrote on February 23, "A life is like a garden. Perfect moments can be had, but not preserved, except in memory. LLAP." The acronym stands for the famous Star Trek line, "Live Long and Prosper."

His work and his memory will certainly live long and prosper well beyond his 83 years. To celebrate his incredible life, here are some facts you may not know about him:

He Was a Poet

Nimoy's poetry was published in various collections including Come Be With Me and We Are All Children Looking for Love.

He Was an Army Veteran

Before making it in Hollywood, Nimoy was a member of the United States Army.

He Loved The Simpsons as Much as You Do

And he will forever be an honorary citizen of Springfield.

He Was a Gifted Stage Actor

Nimoy appeared in Equus and Full Circle on Broadway.

He Was Also a Director

His credits include Star Trek III: The Search for Spock, Star Trek IV: The Voyage Home, 3 Men and a Baby, and Holy Matrimony.

He Was a Folk Rock Musician

You can hear some of his best work on the album Spaced Out: The Very Best of Leonard Nimoy and William Shatner .

He Used His Photography to Promote Body Acceptance

Along with his poetry, Leonard Nimoy also has many collections of his photography published. In 2009, Nimoy released The Full Body Project , a book of photographs of full-bodied women meant to change people's perceptions of what a beautiful body can be. In an interview with NPR, Nimoy commented, " I think, in general, we are sort of conditioned to see a different body type as acceptable and maybe look away when the other body type arrives... And it led me to a new consciousness about the fact that so many people live in body types that are not the type that's being sold by fashion models."

He Was a Van Gogh Expert

Throughout his long and varied career, Leonard Nimoy spent a lot of time studying and making work about Vincent Van Gogh. He wrote a solo play called Vincent in 1981 and a TV documentary called In Search of...Vincent Van Gogh.

He Created the Comic Book Primortals

The series centered on mankind's first contact with alien life as far back as ancient times and was based on the work of Isaac Asimov.

He Once Worked as a Taxi Driver

Nimoy drove a taxi in Los Angeles to support his acting career as a young man. His most memorable customer was the then future president John F. Knnedy. Nimoy recalled, “We chatted about careers, politics, and show business…Kennedy said, ‘Lots of competition in your business, just like mine.’ And then he gave me this: ‘There’s always room for one more good one.’ Words to live by, and I tried to do that.”

He Was a First Generation Jewish Immigrant

Nimoy was born in 1931 to parents who immigrated from Ukraine (former Soviet Republic Isiazlav) to Boston.

He Didn't Always Love Being Spock

Nimoy wrote an autobiography in 1975 titled I Am Not Spock and it detailed the actor's identity crisis between himself and the character he played. He wrote, "The question was whether to embrace Mr. Spock or to fight the onslaught of public interest. I realize now that I really had no choice in the matter. Spock and Star Trek were very much alive and there wasn’t anything that I could do to change that." Then 20 years later, Nimoy published a second autobiography I Am Spock, in which the actor embraces the character he made famous.

He Was a Total Boss

And here is all the proof you'll ever need.