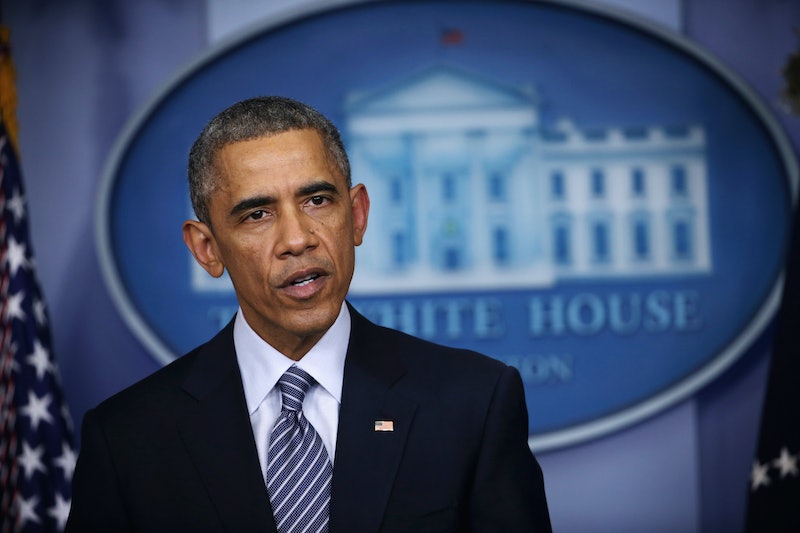 As I'm sure you've already heard, Star Trek actor Leonard Nimoy died at 83 on Friday. Now, many of his friends, family, fans, and co-stars are responding to his death and how the actor will forever be remembered. Well, we can add POTUS to that long list, because President Obama honored Nimoy in a statement. Not only did he graciously talk about the man forever known as Mr. Spock, but he also shined a light on Nimoy's other notable qualities. Part of the President's statement reads:

Long before being nerdy was cool, there was Leonard Nimoy. Leonard was a lifelong lover of the arts and humanities, a supporter of the sciences, generous with his talent and his time. And of course, Leonard was Spock. Cool, logical, big-eared and level-headed, the center of Star Trek’s optimistic, inclusive vision of humanity’s future. I loved Spock.

The President also added his own anecdote about meeting Nimoy and what that meant to him. He says,

In 2007, I had the chance to meet Leonard in person. It was only logical to greet him with the Vulcan salute, the universal sign for “Live long and prosper.” And after 83 years on this planet – and on his visits to many others – it’s clear Leonard Nimoy did just that. Michelle and I join his family, friends, and countless fans who miss him so dearly today.